When Michael Schumacher joined Ferrari for the 1996 season, the German racing driver and everyone at the Scuderia had the herculean task of winning the championship. That was their end goal, and that’s how the Prancing Horse came to dominate that epoch of the Great Circus.
21 photos

After two years of monumental success at Benetton, the Red Baron labored like a bricklayer, slowly perfecting the car with the peeps in Maranello until they secured the constructors’ title in 1999, the Italian team’s first constructors’ title since 1983. With the help of Rubens Barrichello, the legendary racing driver would secure five drivers’ titles through 2004.

For the 2003 season, the Scuderia fielded a highly successful machine in the guise of the F2003-GA. The latter designation refers to Gianni Agnelli, who served as honorary chairman of Fiat until his passing in January 2003.

Although we don’t know who raced this engine and where it was raced, the 3.0-liter V10 in the photo gallery was used by the Prancing Horse that season. Listed by Collecting Cars with two days of bidding left on the clock, the Tipo 052 engine is capable of making 845 ponies in race spec.

Peak horsepower is listed at 18,300 revolutions per minute, which is stratospheric compared to Ferrari’s highest-revving production car. To whom it may concern, the 812 Competizione can take 9,500 rpm.

Currently sitting on a high bid of €16,250 or $18,400 at current exchange rates, the free-breathing V10 will be sold with a buyer’s premium of 5.0 percent. Comprising of the block, cylinder heads, cam covers, and crankcase, this lump is offered without pistons or any major internals.

The auction house doesn’t explain what happened to them, but on the upside, whoever bids the most will get a glorious piece of Scuderia Ferrari engineering and Formula 1 history. Complemented by the original bearings, exhaust manifolds, numbered spark plugs, and carbon-fiber air scoop, this motor would make a magnificent addition to any Tifosi’s collection. 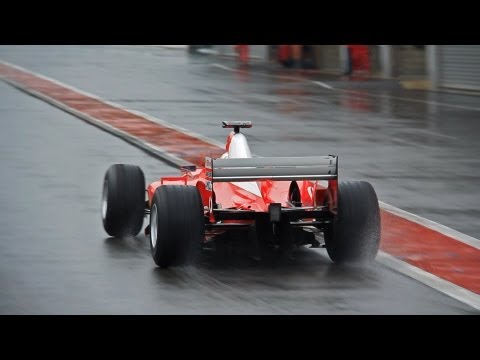