1 If You Hate the Cybertruck, You Will Love This Tesla Roadster and You Can Even Buy It Too

3 Elon Musk vs Jeremy Clarkson: The Beef That Accidentally Started the EV Revolution

Ancuta Iosub
The second generation of the Tesla Roadster was revealed in concept form in 2017, and Elon Musk has talked about it on various occasions since then, but the car is nowhere in sight. It was supposed to launch in 2020, but a further delay pushed its market debut into 2023.
25 photos

Seeing how the new version of the all-electric all-wheel-drive sports car is as whimsical as a unicorn, independent designers have taken it upon themselves to imagine what the vehicle would be like.

A talented German designer named Maximilian Schneider, who has previously worked at reputable brands like Audi, Mercedes-Benz, Volkswagen, Mitsubishi, and HiPhi, has created a wild Tesla hypercar concept envisioning what the next Roaster could bring to the table.

And he set the bar quite high, to be honest. Max based his hypercar concept on Musk’s claim that the Roadster could feature rocket boosters but took things a little bit further and actually made the rockets the focal point of his high-quality design.

The end result of his work, called Tesla SpaceX Model R, doesn’t have much in common with the real Roadster, neither in terms of exterior design nor the technical department. Max created his concept with a more radical look, with a body shape similar to a prototype racer, with LED headlights built into the bulging front wheel arches.

The actual Roadster concept shown by Tesla featured a glass panel roof, but this skilled designer created it with a glass cockpit positioned quite far forward in the car.

Other noteworthy design elements include the aerodynamic wheel covers and the big aerodynamic fins on the rear quarter panels.

What’s more, this extreme SpaceX Model R concept would also show its might when taking corners, not just in a straight line. The rocket boosters play an important role here as well, as they are adjustable and placed above each axis and would press independently on each wheel, allowing the car to reach forces of up to 4Gs when turning.

The young designer has just launched a YouTube channel he aptly named Design to the Max, and the video detailing the creation process for the Tesla Roadster concept is the first he uploaded on the platform. 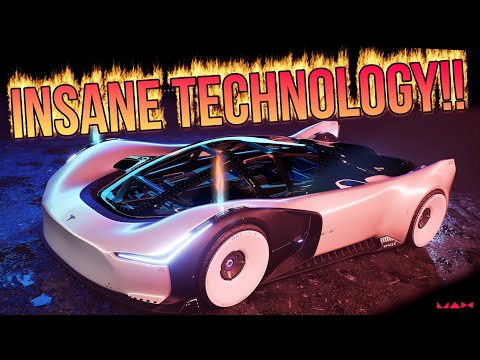 Editor's note: The renderings presented in this article are neither endorsed by nor related to Tesla. They have been created by an independent designer.