5 Flying Cars Are Coming, but They Will Be Terribly Expensive
Car video reviews:
Coverstory

This eVTOL Claims to Be Better Than a Helicopter, and Quieter Too. Has a Range Of 3 Hours

Terrafugia has been around since 2006, dreaming big and struggling to revolutionize the urban air mobility industry. But even though its flying car Transition seemed to finally spread its wings and hit the market after ten years of development, they are still very much grounded. Now the company scales down and launches a smaller eVTOL (electric vertical take-off and landing) instead, called the Seeker.
10 photos

The Seeker is an electric UAV (unmanned aerial vehicle) developed by Commaris, which is a Terrafugia-owned brand. The aircraft debuted at the Commercial UAV Expo in Las Vegas, which took place last week.

With a range of more than three hours of flight on a single charge, the Commaris Seeker promises to be a capable and versatile VTOL. It can reach a top speed of over 60 mph (96.5 kph), and has a carrying capacity of up to 10 pounds (4.5 kg), supporting multiple payload configurations.

A feature-rich specs sheet makes the Seeker suitable for a variety of commercial applications. The UAV can be customized with a 30x optical zoom EO/IR (electro-optical/infra-red) camera, making it great for inspections. Mapping and precision agriculture are yet some other potential uses of the Seeker, thanks to its 120 MP high-resolution camera and its multispectral camera.

Surveillance, gas and oil line inspection, security, maritime search and rescue, solar farm inspections, are some other examples of applications.

Its modular design makes the Seeker easy to assemble and disassemble in the field, in less than three minutes.

With its range of over three hours of flight, the aircraft can cover a distance of approximately 170 miles, which is comparable to what a helicopter is capable of, according to Fred Bedard, Commaris Manager of Business Development, quoted by Drone Life. But unlike a helicopter, the Seeker can be much quieter, thanks to its electric motors that make it virtually silent when above 500 ft (150 m).

When at 400 ft (122 m), the UAV produces a noise of just 40dB, making it more suitable than a helicopter when it comes to applications that require silence, or for urban missions in general. Moreover, the Silencer can carry the same sensors as a helicopter but it is more affordable and with a very low carbon footprint.

Commaris doesn’t offer any information on how much the Seeker costs, but potential customers are encouraged to contact the company for more details. 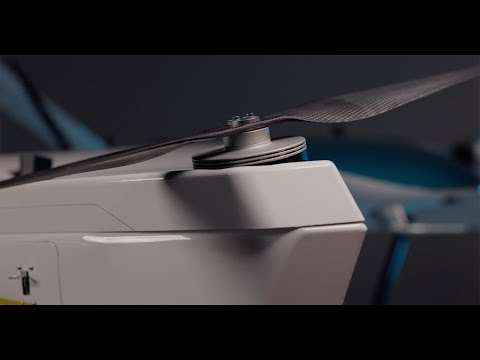