1 This Norwegian Composite Drone Is the New Weightlifting World Champion

5 This Four-Wheeled Robot Laughs in the Face of Gravity, Climbs Walls
Up Next

Home > News > Gadgets
Vlad Mitrache
Do you know what planes and submarines have in common? They both use propellers to move around. Whether they’re pushing air or water out of the way in order to ensure the vehicle’s forward thrust, the principle is about the same.
1 photo
But it’s not as easy as making an airplane watertight, placing it in a large body of water and expecting it to perform loops and barrel rolls just like it would in the air. The nature of the fluid it navigates through does change the dynamics a little, but it’s not something that can’t be worked around.

Well, it was definitely trickier for full-scale vehicles, but in the world of unmanned aerial vehicles, the possibilities expand. Working on a much smaller scale and without the extra constraints posed by the presence of a human being on board, this drone designed by the engineers at Oakland University’s Embedded System Research Laboratory makes the answer to the question “is it a plane, is it a boat, is it a submarine?” sound like this: all of the above.

The principle behind the Loon Copter is neat and simple. The starting point is a four-rotor drone. Obviously, you need a watertight vehicle, so the first step is making sure it’s perfectly sealed.

Then, you need to give it buoyancy. That’s taken care of with the help of a small cylinder tank hanging just below the drone’s main body. When in the air or floating on the surface, it’s filled with air.

When the Loon Copter feels like playing Captain Nemo, the air is pushed out, and it’s replaced by water, so it’s basically using the same principle used by submarines.

But there’s a trick here. Since the copter would have trouble moving forward with the propellers facing upwards, the cylinder has a bend, forcing the drone to tilt.

This way, the Loon Copter transforms into the perfect underwater explorer, even though its speed while submerged isn’t as impressive as its aerial performances. The applications for this technology - apart from the fact that you’ll never be afraid of flying your drone over water - are quite useful, both for search and rescue operations and for underwater exploration. Well, not particularly deep water exploration, as there’s still the small issue of losing control once the drone goes underwater, but this is still a very cool toy. 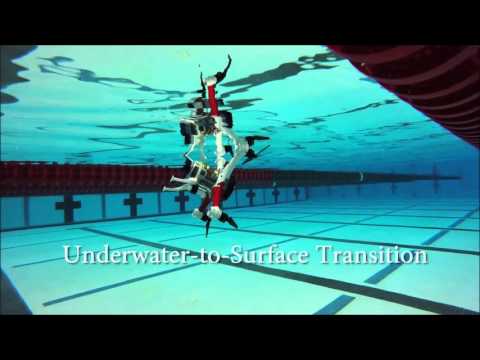