2 Meet the Denali Clerestory, a Luxury Tiny Home Designed to Feel Like a Mini-Mansion

3 Remembering the One SQM House, the Smallest Mobile House in the World

5 The IMAGO iter Tiny House Is Peak Downsizing, the Minimalist Future
Car video reviews:
Up Next

Much like the actual housing segment of the market, tiny living has grown to cater to different needs and different customers with different budgets. At the higher end of the spectrum are massive builds that rival brick-and-mortar homes, and, of course, they come with prices to match.

This niche of the tiny house market isn’t as overcrowded yet as the more budget segment, but that’s not to say that it isn’t of interest. Builders like Custom Travel Homes and Timbercraft Tiny Homes, both of which we covered on previous occasions, believe the future of downsizing doesn’t have to mean compromise but, on the contrary, more comfort, more space, and a more luxurious feel.

For instance, Alabama-based Timbercraft Tiny Homes (TTH) offers the Denali XL model, which is a massive tiny house (an oxymoron, but it works) that offers a full kitchen, a full bathroom, and sleeping for up to four people in life-size quarters. Sitting on a five-axle 41-foot (12.5-meter) trailer, it offers a generous floorplan of up to 400 square feet (37 square meters), along with the feeling of living in an actual home. The Denali XL is to downsizing what a penthouse is to city living.

This is one such Denali XL unit, customized to the specifications of the owner, as shown in the latest video on the Tiny Home Tours YouTube channel (see the video below). The one doing the honors is the owner, Janis. She is a recent retiree who owns a brick-and-mortar home in Portland but started looking into downsizing with the start of the 2020 international health crisis. The Portland home will soon be put on the market because Janis’ partner Glen is also on the verge of retirement, so the plan is to move into the tiny full-term.

Calling the home a “tiny” is an understatement. If the Denali XL comes across as huge in photos, it feels even more so on video. Janis says they settled for TTH as the builders because they make everything that goes inside on-site by hand and don’t rely on third-party furniture that might compromise on quality. The fact that they were allowed to customize their choices and were presented with a wide range of options also helped.

The result is a tiny home that presents like a proper home, with the only exception that it sits on wheels. Because of its size, it’s not particularly mobile: Janis says they had it towed from Alabama to Oregon by a professional, and it’s now located at the Tiny Tranquility Park, so it was not built to move around. The layout includes a loft above the bathroom, where a secondary bedroom will be set up, and high ceilings with a second row of windows throughout.

The home has a full-size kitchen with everything you could possibly need, from a large farm sink to a dishwasher, breakfast bar, large fridge, and “more storage than we need.” Prior to moving into this tiny, Janis and Glen lived out of a remodeled 30-foot (9.1-meter) 1978 Airstream, and they found it too cramped for comfortable living. So when they chose their next home, they really went for that extra space.

The bathroom, for instance, is larger than what you’d find in some city apartments. It has a laundry area with a washer and drier, custom sink with vanity, large walk-in shower, and plenty of storage space. Next to it is a hallway with a pantry and the large staircase that leads up to the loft, with built-in deep drawers.

On one end is the living room, which has an electric fireplace and two skylights, while the bedroom is at the opposite end. The master bedroom also integrates storage, and there’s also a large wardrobe in there as well. You often hear about tiny homes that the more compact space will mean prioritizing among your belongings and cutting down on unnecessary stuff, but that clearly doesn’t apply to a Denali XL. With this one, you get pretty much the same amount of storage space you’d get in an actual house, if not more.

At the moment the tour was filmed, Janis had lived in the tiny for a little over a week and, while it’s clear she was yet to settle in full, she said she found the idea of living in it thrilling. For extra comfort, she had a patio deck installed outside the French doors, with a view out on the meadow, which made it the perfect spot for meal-taking in good weather.

What Janis doesn’t say in the video is the final cost of the build. TTH homes start at $81,000, but the base price for a larger Denali XL is around $125,000. Considering Janis opted for customizing a lot of things, from the tiles in the bathroom and the backsplash in the kitchen to the color combination on the exterior, it’s probably safe to assume her budget was at least $150,000. 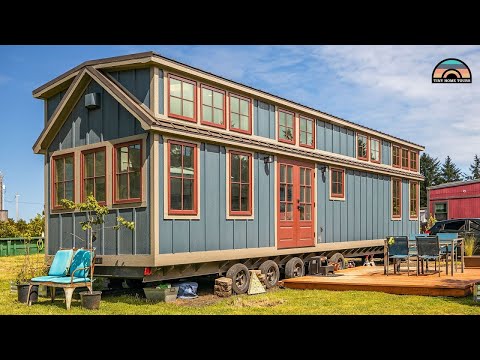