Seriously, is there any self-respecting rider out there who doesn't glorify the CB750?

Within its double cradle skeleton, a 1975 variant of Honda’s CB750F Super Sport family houses a four-stroke 736cc inline-four mill. Thanks to a refined four-into-one exhaust system and domed pistons, the machine’s air-cooled engine was blessed with a compression ratio of 9.2:1 and 58 horses at optimal rpm, which is a healthy performance boost over its “K” predecessor.

In terms of visual updates, the Japanese manufacturer was in search of a sportier aesthetic when designing the ‘75 MY four-banger. As such, the gas tank became slightly longer than that of a K, while the bike’s rear section received a tiny tail to round things out. History aside; the CB750 also packs a perfectly level bone line reminiscent of old-school cafe racers, so it's not hard to see why this mechanical gem is a hot pick for workshops seeking to create a cafe-style masterpiece.

As the years went by, we’ve seen dozens of Honda CB750-based exploits emerge all over the world, and I don't think we’ll ever get tired of seeing more! Therefore, we’re inclined to believe that featuring a gorgeous predator bred under California’s sunny skies is in order, wouldn’t you agree? To be precise, this two-wheeled beauty is the work of Kyle Vara’s Thirteen & Company – a lesser-known enterprise located in Los Angeles.

The weary donor was purchased in Oceanside and subsequently transported to Vara’s L.A.-based garage. Upon arrival, the entire structure was dismantled in preparation for some serious surgical interventions. After shortening the bike’s subframe to tighten its proportions, Kyle turned his attention to removing any signs of aging by honoring the engine and framework with a comprehensive clean-up.

Next, the 28 mm Keihin carbs have been carefully re-tuned to suit a set of premium pod filters, along with a stainless-steel Delvik exhaust system on the opposite end of the combustion cycle. To challenge himself, the solo mastermind decided to fabricate a one-off oil chamber from scratch, and he admits this was the most demanding aspect of his build.

When it was finally complete, the custom tank has been nested in between the frame rails and covered with a sexy leather saddle. An impeccable tail unit takes pride of place behind the new seat, housing a dual-function LED lighting strip that keeps things clutter-free. To bring about a tougher riding stance, Vara installed clip-on handlebars in the cockpit, along with a unique pair of rear-mounted foot pegs on the other end.

The following step consisted of rewiring the CB750 with modern goodies, which are connected to a state-of-the-art Motogadget m-Unit Blue. Furthermore, the shock absorbers were tweaked to have the bodywork sitting almost parallel to the ground. Last but not least, Kyle sculpted knee dents into the factory fuel tank and enveloped the whole thing in a shiny coat of blue paint.

Now, some of you will certainly question the use of Firestone tires, but we’d say they look right at home on Thirteen & Company’s one-off wonder. Although sacrificing grip for visual appeal isn’t something we’d do, you won’t hear us criticizing the author for his unconventional use of rubber. At the end of the day, freedom of expression is key to any art form, right? 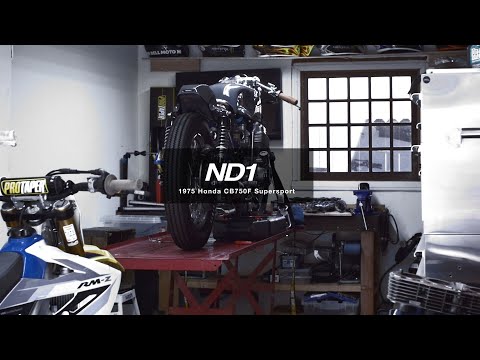