5 First-Person View on a Motorcycle Crash Saved by Airbag Vest
Car video reviews:
Up Next

Aston Martin Bids Farewell to DB9 With "Last of 9" Edition

Wearing loud colors while riding a motorcycle is considered by most an extra measure of protection, enabling other road users to spot you more easily and not crash into you. Well, not if you’re with stupid...
1 photo
I mean, take a look at the video bellow where what appears to be a female rider wearing an electrifying green jacket gets rear ended by another female driver that fails to stop in time.

And it wasn’t even rush hour. It was a beautiful afternoon, with the sun almost setting and very few cars were present on the road at the time. It would have been a great ride if it wasn’t for the blonde lady driving a Hyundai.

As they were cruising, the bike stopped at a red light, but the Hyundai Tiburon was following too close and the woman behind the wheel was most probably using her phone as she started braking too late and hit the bike quite hard.

There was enough force to bend the bumper around the bike’s rear wheel and keep it upwards, while the rider fell off to the side. Luckily, she escaped unharmed, maybe with a bruised bottom, but able to stand and walk.

So, next time you take your hi-viz jacket and throw a leg over a bike, just remember that if drivers around you are busy texting or playing Pokeslap No on their phone, you’re as invisible as wearing a mirror.

It’s been said numerous times, but take it once again - as long as you’re in the saddle, assume you’re invisible, a mere shadow advancing through traffic. Scan the road ahead continuously and always try to guess what’s going to happen. But never forget to check your mirrors as often as possible, especially when coming to a stop.

You could also position your bike to either side of the lane to allow such a careless driver not to hit you if he or she can’t stop in time. 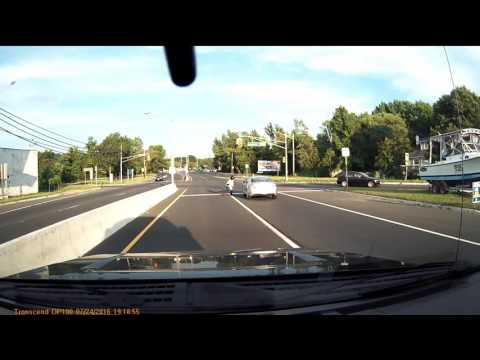