5 This Guy Just Converted His smart fortwo Into the World's Smallest Camper, Literally
Car video reviews:
Up Next

Big budgets do not necessarily deliver excellent results when it comes to van builds. Indeed, materials and equipment quality do make a difference. Still, there are other things at play, such as ingenuity and creativity, and this is what this couple demonstrates in their versatile low-budget Sprinter van conversion.

Beck and Austin spent four months and $8,000 (€8,112) to create a mobile home dedicated to full-time living. They started the project in the summer of 2020 in preparation for a 10-month road trip in which they visited each national park in the continental U.S. Quite an ambitious goal!

The 2010 Mercedes Sprinter van's exterior doesn't inspire van life; all that gives it away are the solar panels on the roof and the small lateral windows. But once you open its sizeable main door, you'll be surprised to find a beautiful and well-thought-out setup. Let's get into it!

First, the entire van is insulated. Some of you might know that a lot of heat is lost through windows, and that's why they separated the driver's cabin from the rest of the van using a steel wall and sliding door.

On the right, you'll find a small mirror, some plants, and hangers for their clothes and backpacks. Dead ahead, you'll notice the kitchen boasting a spacious IKEA countertop, a 90-liter mini fridge, a microwave, a large sink, and a two-burner cooktop. The best part about the kitchen is the water system. Most campers I've talked about have a built-in system with tanks, but Beck and Austin kept it straightforward.

The system is made from four Aqua-Tainers, 7 gallons (26.5 liters) each. One is for grey water, and the rest are for fresh water. A hose runs from one of the containers down to a foot pump, which is used to push the water to the sink. The used water is then dumped into the grey water tank. A helpful element is the small diameter spigot, which helps increase the pressure of the water. This easy-to-build setup is cheap and allows the couple to use as little water as possible. They say they can go almost a week without filling up.

Other notable details are the cabinets, a magnetic knife rack, and the splash-proof tiles, all adding to the kitchen's aesthetic. There's a pantry and some additional storage spaces around, and surprisingly there's a single drawer in the whole van, where they store their kitchen utensils.

Let me tell you a bit more about the living room. It consists of a small couch, where an extra soul can sleep, albeit it won't be a very comfortable experience.

There are two design features I enjoy in this space. First, there's a slide-out table where two can have dinner, neatly housed under the bed. Second, hidden behind a small couch cushion, you'll find a locked compartment where Beck and Austin keep their electronics in case someone might break in.

You might wonder, "Wait a sec, where's the bathroom?". Well, they use a porta potty for solid waste and a "pee funnel," as they call it, for liquid waste. The funnel is routed directly to the van's exterior, and they say they only use it on non-paved roads. To shower, they connect a pump to an Aqua-Tainer and do it outside, at the back of the Sprinter.

Given that they are both pretty tall, they wanted to install a lengthwise bed rather than a side-to-side one. They also used a full-sized one, which left some more spaces on the sides of the mattress, which they use for storage. Overhead cabinets are where they store most of their clothes.

I really like that even though it's a simple build, they didn't compromise on safety. They installed a carbon monoxide alarm, a smoke alarm, and a propane one.

Last but not least, there's ample space under the bed, where you'll discover the utility systems - three 80 Ah batteries, a 2000 W inverter, a D.C. distribution panel, a solar charge controller connected to the four 100 W panels, and a gas canister connected to a valve system. There's also a bunch of extra storage space.

There are some other nice features in this couple's build, but I'll let you discover them in the video below. It's impressive that this setup costs only $8,000 (€8,112); congrats to Beck and Austin for their originality and imagination. It shows you can create a practical and neat van even with a low budget! 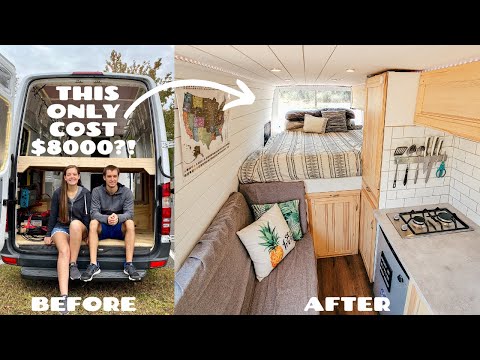