This Corvette Claims It's the Fastest All Motor C8, Lets Us Check the Time Slips

General Motors' decision to allow Chevrolet to almost completely reinvent the C8 Corvette into a different breed of sports car seems to have opened up a world of possibilities. Most of them have to do with balance and maneuverability on the racetrack, rather than all-out drag strip brunt. Then again, no one said the naturally aspirated legend shouldn’t go for quarter-mile glory, right?!
26 photos

We’ve seen the C8 Corvette on quite a few occasions being able to make short work of other sports car on winding courses, but it’s also proven to be a great drag racing companion thanks to its great Launch Control feature and massive traction to the rear wheels provided by the engine’s placement.

Although many have already started customizing the C8 according to their preferences, going for the all motor approach has proven tougher than slapping a pair of turbos, for example. That’s because the ECU of the naturally aspirated 6.2-liter LT2 V8 is forbidden fruit for the aftermarket community.

But modified cars such as this Arctic White example from EFX Tuning prove that where there’s a will, there is always a way. We’ve previously seen this example go below the official Chevrolet time for the quarter-mile, but this time it’s back with even better runs, apparently snatching the “fastest all motor C8 in the world” title in the process.

The video (embedded below) provided by the TalonTSi97 Videos channel on YouTube is brief and concise, condensing a few beauty shots of the C8 and its reworked engine, a few runs of the car (against a Caddy and an older ‘Vette), a list of modifications, and the time slip evidence to attest their claims.

This is regrettable not because we don’t trust them, but on account that it would have been very interesting to see the competitors' times too. As far as we can tell, the Caddy seemed to have nailed the win, while the other Corvette apparently got owned by the C8. 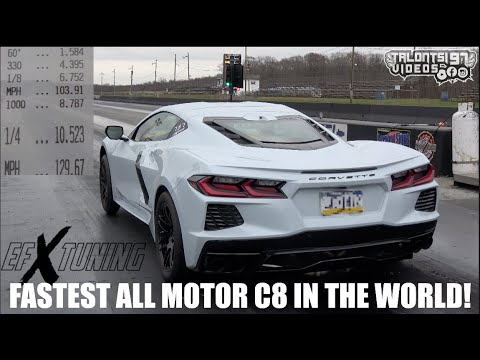