1 Mazda Bongo Friendee Is a Crazy JDM Camper, It Could Teach the Volkswagen Eurovan a Lesson

Florina Spînu
Van life is not for everyone. It’s a lifestyle that requires you to embrace simplicity. But some people make it work, and they wouldn’t change it for anything. Ricardo has been living full-time in his self-converted ProMaster van for more than four years. His rig is quite unique since it’s both a camper and a music studio.
7 photos

Five years ago, Ricardo made the decision to move from Germany to the States and pursue his long-life dream of becoming a Hollywood film composer. Soon after he arrived in the U.S., he got into van life. The nomadic lifestyle offered him financial freedom and allowed him to explore the country and discover new places.

Ricardo converted a RAM ProMaster into a little camper. Since he’s a professional composer, it was only natural that his van would include a music studio. Located at the rear of the van, this area features a full-size desk that offers enough space for his computer and all the equipment he needs to create art. It also has an electric keyboard, a guitar, and all sorts of elements that he took from his old studio and incorporated into his rig.

Since he’s living life on the road, the van had to include a kitchen and a bedroom as well. The kitchen is located next to his music studio, and it comes with a single-burner portable cooktop, a stainless steel sink with storage underneath, a chest-style fridge, and a counter extension that offers enough space to prepare delicious meals. It also serves as a table for two.

The kitchen doesn’t have that much storage. It has two large cabinets that he uses to keep away different necessary items. He has a little bit more room above the cockpit area to put away his belongings. There's also some storage above the living room for his clothes.

The living room is equipped with a Murphy bed bench. This allows Ricardo to easily convert this area into a bedroom. His rig might be compact, but it totally works for him. Recently, Ricardo offered a tour of this camper /music studio to the folks from Tiny Home Tours. You can watch the clip down below to find out more about him and his converted ProMaster van. 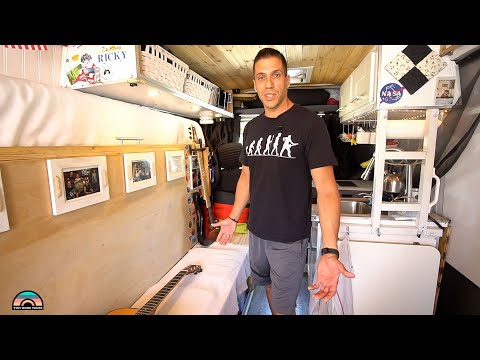