This Bugatti Is for the Bugatti Collector Who Has It All

Rich people love to pass their love of exquisite, expensive things on to their offspring. As the saying goes, you have to start ‘em young, and this also applies to a love of all things motorized.
12 photos

One way of getting a kid interested in automobiles is with toy cars, of course. Normies can buy theirs from toy stores or even supermarkets, but once you start rolling with the onepercenters, that is no longer desirable. Only a branded vehicle will do, even if it’s just a downsized kiddie version of the original, because it’s a limited edition and, in most cases, as expensive as a regular car.

You may have heard of car-matching between parent and child, a practice that’s become a must with millionaire celebrities and popular influencers. This is next level even compared to that: a vintage Carousel, made by Bugatti, with 8 individual cars. It’s the perfect Bugatti for a Bugatti collector who has it all.

The carousel, which is undated, is about to cross the auction block at the Monterrey event held by Mecum Auctions between August 18 and 20. It doesn’t come with a price estimate, but it’s listed as the main attraction, which can only mean one thing: it won’t be cheap. As a matter of fact, the listing doesn’t even include too many details, but with something as lovely and, why yes, as beautiful as this, photos and videos CAN do just fine.

There are eight Bugattis in the carousel, all of them painted differently and molded after the Bugatti Type 44 built between 1927 and 1930. Each car measures 38 x 94 inches (96.5 x 239 cm) and comes with a steering wheel and a bench that could seat two, but will probably only ever seat one kid. All four wheels on the car spin as the carousel turns, which is something you’re not going to get with a modern-day rig, and all cars have the Bugatti badge on the nose.

The rig runs on electricity, has working lights, and measures 336 x 336 inches (853.5 x 853.5 cm). It presents in excellent condition, but the vehicles do show some signs of the passage of time, especially in the footwells. As carousels go, this is a very elegant one – whoever has an aversion to circuses or rigs of this kind will appreciate this statement best.

The carousel is currently located in Wisconsin, but Mecum will handle disassembly and shipping to the new owner anywhere in the U.S. 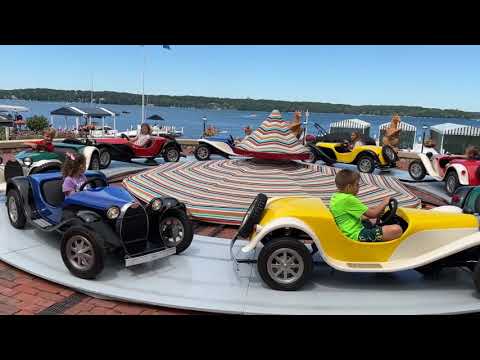