1 Fastest Ever Diesel-Powered BMW Is Quicker Than Hellcats, Can Beat Tesla Plaids Too

4 BMW Prepping New Hot Hatch, Should the Mercedes-AMG A 45 Worry?

5 Tuned BMW M135i Thinks It’s Brawny, AMG A 45 S Laughs All the Way to Pole Position
Up Next

2023 Kia Soul EV Launches in the UK With Revised Lineup

This BMW 1 Series Convertible Boasts a Swapped M3 V8 Engine, It's Now for Sale for $38K

At first glance, this might seem like your regular BMW 1 Series Convertible. But, if you notice the M3 E90-style hood, you’ll know something’s special about this car.

Under the hood, the original N43 2.0-liter inline-four engine is gone. Instead, it was swapped for an S65 from an M3 E90, which seems to fit in there quite neatly.

Other details have been borrowed, such as the front and rear subframes from an M3 E92. The vehicle sits on 19” M Performance wheels and features Michelin Pilot Sport Cup 2 tires and a StopTech big brake kit. The car is quite undercover as the original 118i badge at the back has been kept, even though the quad exhaust system’s magnificent sounds might give away the car’s power.

The BMW sports a six-speed manual gearbox from the E90 M3. The interior has also suffered some subtle M upgrades, such as the steering wheel and instrument cluster. There’s a button for the kW DDC (Dynamic Damper Control) with three settings between the gear shifter and the cup holders.

Even though it weighs more than the original car due to its new V8 engine, this 1,620 kg (3,571 lbs.) build will output 420 HP (313 kW) and 400 Nm (295 ft-lbs.) to its rear wheels, so it will undoubtedly turn out to be a blast to drive. This is what AutoTopNL, a filming and testing company, demonstrates in the best place to test a car to its limits, the Autobahn. The driver manages to reach speeds of 270 kph (168 mph) before some of the underbody protection comes off, so he aborts the highway runs.

The car has a total of 73,000 km (45,360 miles), of which 1,000 km (621 miles) have been done with the new engine. No expense was spared in building this car, and it patiently awaits its new owner. The current owner actually made it for his wife, but instead, he decided to list the vehicle for sale. 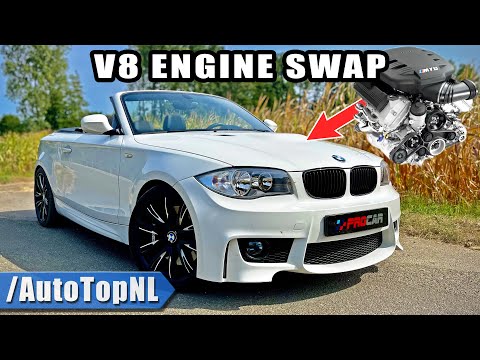