1 Saab to Peel the Veil Off Its Next-Gen Combat Boat 90, Here's Your Chance to Get on Board

2 Spry+ Near Indestructible Drone Does It All: Swims and Even Takes Off from Water

3 Man Takes His Land Rover for Swimming Lessons, Turns It Into a Scuba Rover

5 Watch in-Cabin View of a Tesla Driving Through Windshield-Deep Water in China
Car video reviews:
Up Next

It’s a known fact that billionaires expect the best of everything, and that a lot of what they sport, from outfits and accessories to vehicles and gadgets, is over the top. But, after all, who’s to say where should the richest people on Earth draw the line? When it comes to fun stuff, all of us like to take a look at the quirkiest and wildest concepts out there. They just get the extra option of actually exploring them, too.

The idea of vehicles that can conquer multiple environments, from sea to air and land, has always fascinated mankind. Since we can’t become amphibians ourselves (except in movies), we want our real-life vehicles to have this “superpower”. Countless versions of amphibious vehicles have been tried and tested over the course of history.

The most common ones today are most likely amphibious airplanes, typically used for search and rescue or firefighting operations, but models for private use are also available. There are even motorhomes that can float on water, like the rare Boaterhome, the fierce Terra Wind, or the French tour bus Marcel. But there’s one thing that’s missing from all of these – they don’t belong on a superyacht.

All yachts, from the smallest versions to the giant ones, need boats for fast and easy transition from sea to land and vice versa. From basic dinghies to oversized, premium boats, these things called “tenders” hide in the bellies of all yachts, like minions waiting to serve their master. Of course, the world’s largest and most expensive superyachts come with several large tenders, and room for a car or two, in their massive garages.

This is how the idea of a boat that could also ride on land, was born. As the billionaires of the world set anchor in some magnificent location, they can simply start driving their amphibious car anywhere they want to, then get back to the yacht the same way, seamlessly moving from land to water. And, since this is high class we’re talking about it, this couldn’t be just any old amphibious car, but a limousine.

The idea wasn’t new, but Boston-based Nouvoyage was the company that actually made it work. In 2013, the Limousine Tender 33 was introduced as the world’s first luxury amphibious craft that was capable of taking guests on both water and land destinations, in the best conditions. The company’s Chief Executive Officer, Martin Bodley, noticed that previous amphibious models had limited performance and weren’t very reliable.

By combining technologies from the military, commercial and racing industries, this innovative platform replaced cumbersome, complicated mechanical systems, with one that was simpler, but more effective. Powered by a Yanmar diesel engine and a Remy electric motors, the Limousine Tender was able to reach almost 30 knots at sea, and 85 mph (136.7 kph) on land.

Designed with a planing hull (that glides on top of the water, at higher speeds) and what Bodley called a “catamaran undercarriage arrangement”, the amphibious limo was able to deliver significantly increased speed, increased range both on land and water, optimal maneuverability and better fuel efficiency.

The 10-meter (33 feet) long tender, weighing 13,500 lbs (6,123 kg), could accommodate 12 passengers and two crew members. Everything inside was state-of-the-art, from the luxurious seating, to the air conditioning system and onboard restroom – which almost made it an amphibious boat, limo and RV in one. It was also designed with retracting roof and windows, and a gull-wing side entry, for easy access.

With a price estimated at a minimum of $2 million, this high-end water toy was meant for superyacht owners and the resort market. As the brand described it, it’s mostly about “making an entrance”. After all, “whether you’re arriving at a film premier in Cannes or a dinner reservation in Les Beaux”, your arrival must be unforgettable. A show-stopping superyacht should come with an equally outstanding tender. In this case – the amphibious limousine.

The funny thing about this ultra-luxurious water toy is that it’s still unclear whether it’s currently under development, or never went past the concept phase. It seems that it will get built by the Nedship Group Shipyard, but there’s no confirmation of the project actually going forward. It would be a shame if the Limousine Tender 33 didn’t come to life – it’s one of those outrageous ideas that’s worth pursuing just for the fun of it. 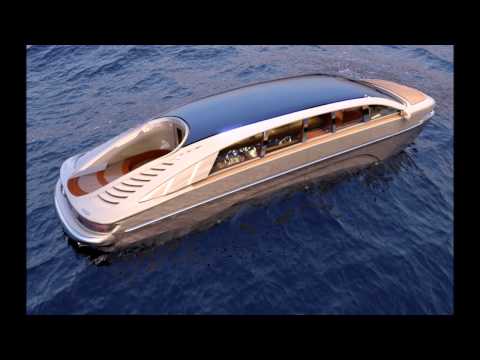