1 LEGO Version of the James Webb Telescope Is Spot On, It Even Folds for Launch

4 999-Piece LEGO Bike Is Fully Functional, Has a Working Drivetrain and Everything

5 The World’s Biggest LEGO Airplane Took 10 Months to Build, With 40,000 Pieces
Car video reviews:
Up Next

This Awesome Toyota GR Supra Is Made Entirely Out of Legos, Drives

Even the most complicated and time-consuming Lego Technic you ever put together can’t hold a candle to this one: Lego and Toyota have come together for a very special – and quite awesome – Supra replica car, made entirely out of Lego bricks.
15 photos

This is actually a three-way partnership between Lego Japan, Legoland Japan, and Toyota Gazoo Racing, with the purpose of celebrating the 35th anniversary of the Toyota Supra. The result is a car that’s slightly wider than the GR Supra, considerably heavier, much slower, but still incredibly awesome. It’s a Toyota GR Supra made almost entirely out of the tiny bricks.

Because official videos documenting the build are geographically restricted, the one available at the bottom of the page shows some insights into the incredible project. According to Toyota Gazoo Racing, it spend 3,000 hours in development and then another 2,400 hours being built. Mostly Lego bricks were used for it, except for the wheels, the driver’s seat, the steering wheel, gauge cluster, and badging, which were sourced from a real Supra.

A total of 477,303 Lego bricks were used for the Supra, which ended up looking like a pixelated version of the real deal, with working lights and a matching paintjob. The Lego car tips the scales at 4,156 pounds (1,885 kilograms) and is only a tad bit wider than the original. It’s also much, much slower.

That’s perhaps the most impressive part about the project – not that the fact that it was built in the first place isn’t impressive enough. This Lego Supra actually drives, being fitted with an electric drivetrain. It’s nothing close to the real Supra, though, being able to reach a max speed of just 17 mph (28 kph) but, if you think about it, it goes faster than most e-bikes in Europe, whose speed is capped at 15.5 mph (25 kph). It looks better, too.

The Lego Supra will now go on display until October 11, 2021, at Legoland Japan, after which it will hit the road, making appearances at various racing events across the country. So now you know: if you have plans to be in Japan anytime this year and want to see this special Lego creation, you know where it’s at. If you don’t, you can always settle for the tiny, boxy and not nearly half as cool Speed Champions version, which costs a hair under $20. 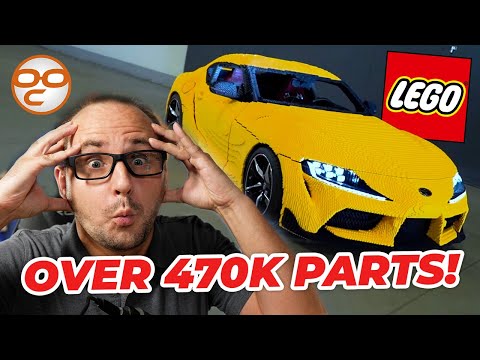