2 Meet the Waiter of the Future. KettyBot Is Smart, Funny, and With Impeccable Manners

This Awesome Flame-Throwing, 30-Foot Tall Robot Is Made From Airplane Parts

Technology, art, and sustainability can have a lot in common. An award-winning art project proved it recently, at a local competition. Creativity can really take sustainability to the next level and show that saving the planet can also be fun.
7 photos

There’s no doubt that we are literally moving towards an era of sustainable transportation, with the automotive industry focusing on alternative solutions to help cut CO2 emissions. Replacing standard vehicles with electric vehicles or hybrid ones seems to be the main answer, but sustainability is much more than just clean energy and reducing the toxic emissions level.

It’s also about what happens with these vehicles when their lifecycle ends.

Shane Evans, from Denver, succeeded in demonstrating that “trash” can be turned into something amazing. We’re constantly impressed by the highly advanced robots developed by big names in the industry, but a robot that helps the environment and that gives future generations a great example could be even more fascinating.

People in Grand Rapids, Michigan, were able to admire a giant, 30-foot (9 meters) tall robot displayed in the city during the ArtPrize competition. This unusual robot wasn’t just shooting flames from its head and arms and swiveling around but was actually made mostly of airplane parts and other reclaimed objects.
Shane Evans built this thing from scratch, even though he doesn’t have any formal engineering training, and is also the one piloting the giant robot.

Evans told MLive.com that it all started when a friend took him to an airplane junkyard. He used aircraft parts for 90% of the robot, which is operated from the torso cockpit. The artist climbs inside and controls the motion of this articulating robot, as well as the flames, by operating joysticks. The fire is powered by a propane tank of 100 lbs (45 kg).

Evans’ “Robot Resurrection” was created a few years ago and showcased at several shows, and it recently won the ArtPrize competition, wowing the crowds with its size, movements, and story.

Evans, who is passionate about restoring vintage motorcycles and real estate, wanted to show how we can prevent vehicle parts from ending up in the ocean or at the landfill. He hopes to encourage young artists to recycle used parts and give them a new life. 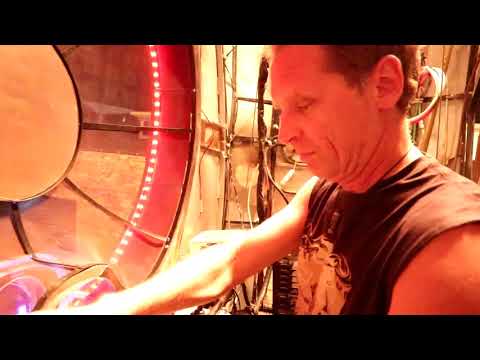