Apple’s CarPlay and Google’s Android Auto are two systems that provide drivers with modern infotainment features and smart capabilities, all powered by smartphones connected to the vehicle either with a cable or wirelessly.
8 photos

And while such functionality needs to be bundled with the car, installing aftermarket kits on older models has become a more common thing these days, especially as these are getting easier to find and, more importantly, a lot cheaper. Or at least, cheaper than a genuine upgrade or navigation retrofit.

This redditor, for example, has installed an aftermarket Apple CarPlay kit from Unique Auto Developments in their Audi A4 Avant (B8), and the up and running system looks no different than a factory-installed unit.

What’s more, they say that installing this at home is actually possible, of course after watching a bunch of video tutorials provided by the manufacturer, but at least you don’t have to spend extra for professional installation.

“The most difficult part, by far, was routing the microphone cable up the A pillar without tangling with airbags. I did this by patiently tucking the cable around the lip. I did not remove any interior pieces to accomplish it. The kit does not modify the car in any way, and could be fully uninstalled with no trace. I don't recall needing anything more than a screwdriver and a spudger. The bit that caught me off guard was that you remove the video screen from the dash and install a touch digitizer over it!” the redditor explains.

The company selling these kits has several versions in stock, and they can be installed on multiple Audi models, including the A4, A5, S5, A6, S6, Q7, A8, S8, and others.

This Apple CarPlay kit costs approximately £449.99 ($580 / 532 Euro), but the price increases depending on version and the car model it’s aimed at.

Once installed, CarPlay can also be used with steering wheel controls, and rear cameras are supported too, as the real-time images are displayed when putting the car in reverse. 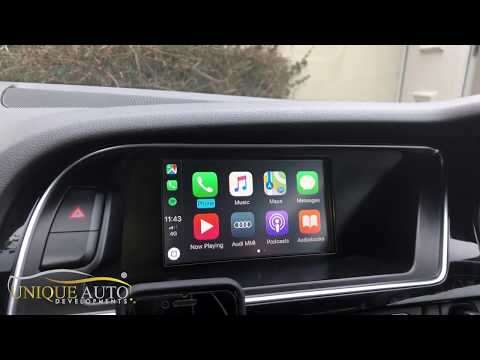