1 The Mars Multi-Purpose Building Is Striking, Inspired by the Red Planet

Humanity has always been fascinated with flying and its mortality and limits, and space exploration manages to combine both in the most enticing, eternally fascinating proposition. Those of us who will never come close to experiencing the real deal can always try to replicate that experience here on Earth.

As April is drawing to a close, so is autoevolution’s Space Month virtual celebration. And, while this cover story won’t take you to space, hopefully, it will help you experience some of the claustrophobia and sense of awe that must accompany a mission there.

We’ve talked about space-themed real estate before. Because of man’s fascination with space, architects and people with enough money often take inspiration from actual missions or sci-fi movies to design the most astounding, barrier-breaking, or simply odd structures. This definitely fits the “odd” label: it’s a luxury, converted four-bedroom home in Gateshead, North-East England, and by golly, if you’re not horrified by the idea of fingerprint-magnet surfaces or an all-white interior, it’s for sale.

Currently listed with Belle Vue Estates, this home is asking £500,000 ($694,000)—a fair price for what is described as “quite simply the most absolutely unique and fabulous accommodation we have marketed.” It’s situated in a residential area called Low Fell, and it is, if nothing else, an incredible effort toward turning living spaces into a sterile, spaceship-like environment. Or, as the headline says, it’s like a spaceship and a prison made a fancy baby with three separate garages and a roof terrace.

“Having an extremely individual design, this property will take you on a spectacular tour of wonder and amazement,” the listing notes. “The unique home boasts both a touch of luxury and privacy whilst keeping many original and industrial features from its heritage and past.”

But truly, the words don’t do this house justice, so the listing includes a tour video, which you can also see at the bottom of the page. It was once a Co-op store that was converted into a two-level home decked in all-white. The only touches of color are in one of the bedrooms, with a colorful couch, plenty of gray and metal, and red pillows on the couch in the cinema room.

It has heavy vault doors throughout, porthole-like windows even inside, offering views from one room to the other, prison-style toilets and sinks, and enough shiny, reflective surfaces to give the housekeeper not even a second to rest throughout the day. That includes the absolutely stunning winding metal staircase that leads to the upper floor and the Bentley fireplace.

The master bathroom comes with showers with a built-in tanning booth because you will want to look your tanned best among all that white stuff. Then, one of the bedrooms has pod-style beds, accessible by a small staircase with three steps on each side. Another has metal floors like you’d see in a warehouse or, again, in prison, but the ensuite bathroom is hilariously decked in shaggy rugs.

The property is offered with three garages, more than enough to park all your space shuttles: a two-vehicle integrated garage and two detached garages. You also get parking space for two more cars outside. Other amenities include a generous private roof terrace and a two-in-one gym and cinema room—though, for the record, it looks like the gym was more of an afterthought to the cinema.

The listing went public at the end of March and has now reached near-viral status. The choice of music for the ad did help (it’s Carl Orff’s “O Fortuna” from the “Carmina Burana” collection), but most of the credit goes to this space-themed, absolutely insane, and probably very impractical home.

On a more serious note, whoever did this conversion also deserves credit. It might be an impractical home, but it’s a looker. An eccentric billionaire would probably love to own it as a holiday residence. 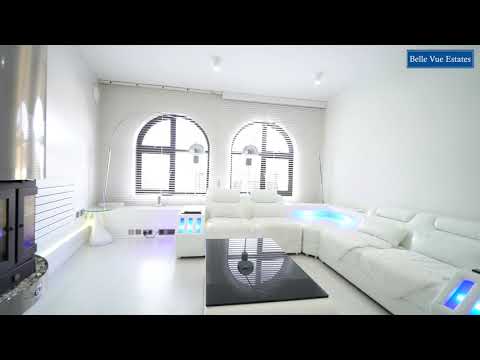