Gabriel Nica
The E9x M3 models might be retired but their legend lives on through passionate people that make exceptional efforts to keep enjoying that beautiful S65 4-liter V8 engine. That’s exactly what’s happening here, even though the original numbers of the M engine are gone.
1 photo
The guys from Dragtimes are known around the world for their ridiculously fast and overpowered rides that go head to head in their drag racing competitions. It’s at their events where we saw 2,000 HP cars and fire breathing ‘dragons’ that nearly exploded by the time they reached the end of the runway. Not only that but a number of world records were also destroyed on their strips, showing the world what true passion can do.

Now, they’ve come out with a new claim, saying that the two cars you’re about to see are the fastest super sport rear-wheel drive vehicles in the world. Looking at the numbers, we’re tempted to believe them but considering the huge amount of tuned RWD sedans out there, we wouldn’t bet everything on it. You never know what new ‘beast’ you can uncover in the farthest corners of the world.

First up is a Mercedes-Benz C 63 AMG Weistec Engineering edition that has 670 HP and manages to outrun a Corvette C6 with 707 HP (about the amount the new Challenger SRT Hellcat has) on the strip. The fact that a sedan was capable of doing that is worthy of out mention.

Then comes the world’s fastest super sport sedan, an 820 HP BMW E90 M3. That’s nearly twice as much power than what the stock car used to make. We don’t know exactly how that was achieved but this thing did the quarter mile in 11 seconds flat at 214 km/h (133 mph), hair rising numbers. That's 0.2 seconds faster and 13 km/h (8 mph) higher than the aforementioned Hellcat. However, the comparison fades when you compare the price tags of the two. 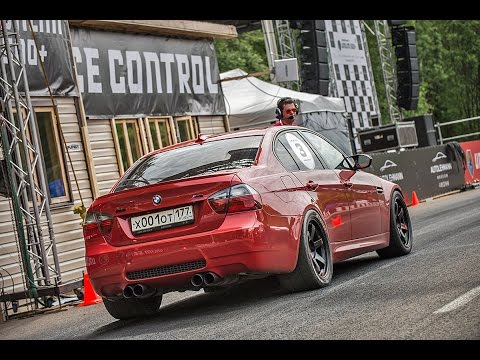