5 Former Ambulance Now Campervan Is Ready To Travel; It Comes With Its Own Kayak!
Car video reviews:
Up Next

Ambulances are built to be reliable and to fit lots of gear and equipment in them; that's why they're a fantastic choice for a camper conversion. Today we're looking at an off-road ambulance RV build that will probably blow you away with its number of features.

New Jersey Outdoor Adventures is a YouTube channel hosted by Patrick Botticelli. His mission is to present impressive custom conversion projects, and in one of his recent videos, he meets up with Mike from JM Custom Fabrications, who does a tour of his ambulance mobile home.

First, let me tell you about this vehicle's off-road capabilities. Mike went all the way and ensured no terrain was too rough for his ambulance. It boasts a UJoint Off Road 4x4 kit, with an 8" (20.3 centimeters) ground clearance and 37" (94 centimeters) tires on 16" (40.6 centimeters) rims. Moreover, he also added Fox shocks and a Rough Country steering stabilizer.

This former Ford ambulance is powered by a 7.3 Powerstroke diesel engine, which is highly sought after for many camper conversions.

Just like Mike does in the video, I'll start talking about the exterior before moving on to the truly stunning part, the living space.

As you might know, ambulances have many spaces scattered around their exterior, and Mike fully uses them. Some are meant for storage, while others house utilities, include batteries, propane tanks, water, fuel tanks, and a generator. All are neatly organized and connected to the indoor systems. On the roof, you'll find an extra storage box, two 200 W solar panels, and an A/C. The black and lime green graphics are a nice touch for the ride.

There are two ways to enter, a side door and the typical ambulance double rear doors, which Mike says is one of his favorite parts about his whip. If you go in through the side, on the right, you'll discover the "brain of the vehicle," as the owner calls it. That's where all the power systems are cleverly organized - two deep-cycle batteries, a 3000 W inverter, transfer switches, and a charger, to name a few. All run through a control panel which redirects the energy to the utilities. You'll also find a bunch of switches and displays on the wall that control the different features.

Regarding storage, Mike kept some of the original cabinets and added some vinyl to give them a fresher look.

Next up, there's a desk with a wide-screen display connected to a PC. It also doubles as a TV and a receiver for all the speakers installed in the car, which provide an excellent stereo audio output.

The desk is right beside the kitchen countertop, on top of which you'll find a large sink and a portable gas stove, which can be moved to have more space. Other features include a toaster oven, a microwave, a coffee maker, and a small fridge.

The couch doubles as a surprisingly large bed; you can use an insert to convert it. Above, there's a cabinet and a TV.

The last important part is the bathroom, which is quite compact. It has an RV toilet and a shower, meant to be used outdoors by opening a narrow door and putting the shower head on a platform.

Oh, I almost forgot, the lighting is incredible. At the press of a button, he can put on a light show with the help of the LED strips and a small disco ball.

All in all, this ambulance camper is not only pleasing to the eye, but it also provides a versatile and well-equipped space for on-the-road living. This, combined with its off-road and off-grid capabilities, make it a remarkable service vehicle conversion. 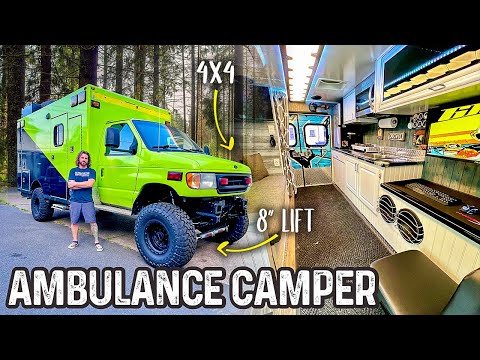