Home > News > Car Profile
Stephen Rivers
It's easy to do something for money but what Redux has done with its $375,000 BMW M3 CSL is clearly a labor of love. It's no shock then that every detail was agonized over. And that includes the incredible driving experience that's better than ever.
7 photos

In fact, it's been so heavily scrutinized that Top Gear's Ollie Marriage says that he's not entirely sure this level of detail was even necessary. For example, the entire exterior, aside from the doors and the roof, is made from carbon fiber.

That's not where the bodywork stops though. Redux added width to the front and rear fenders. Then they rounded off the wheel wells to better fit the wheels and tires. Next, they added a special herringbone pattern to the carbon weave that can be seen under the spoiler and on into the trunk.

That intense attention has also been paid to the interior. It's not all futuristic and modern like it could be. No, it's restrained. The original gauges are all still present. Still, much of the interior has been simplified and buttons have been hidden away too.

It still looks and feels like a classic E30 inside but one that has just rolled off the assembly line. The engine is equally youthful. Instead of the old 2.3-liter four-cylinder, this one displaces 2.5-liters thanks to all-new internals.

XCT dampers, carbon-ceramic brakes, and a billet aluminum engine block are all optional extras. The power unit under the hood of this car makes 300-horsepower and 205 lb-ft of torque. That might not sound like much but it's more than enough to make this lightweight M3 go.

The combo of power, lightness and newly added stiffness is something no original M3 can accomplish. Have a watch and hear as this nimble little restomod tears up the track with glee. 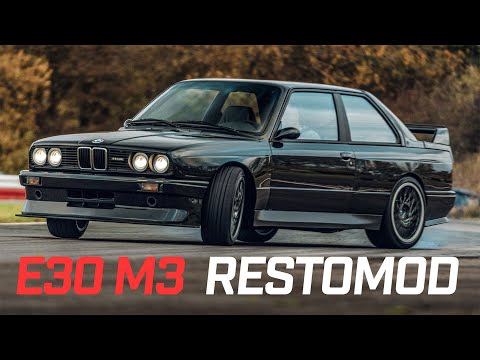