The original E28 BMW M5 was born around the same time as this particular writer, and life has already proven which one become a world-renowned icon. Naturally, it’s the business sports sedan, which has progressed through the E34, E39, E60/E61, F10, and F90 generations. Just like Brad Pitt’s Benjamin Button character, it's getting younger and stronger by the year.
15 photos

The Bavarian automaker premiered the sixth generation back in 2017, so the M5 had plently of time to go through the customary facelift – or rather the oddly-named LCI (Life Cycle Impulse), as vlogger RokenR likes to point out when he gets to check out an M5 Competition up close.

We’re also getting rather personal with the 2021 M5 F90 Competition – albeit only virtually through the customary POV included by the AutoTopNL YouTube channel in its high-speed Autobahn trial runs. This one, in particular, is great for a late Friday break during work – there are no words involved, so no need to bother with any NSFW language.

It’s also quite short, needing a little more than three and a half minutes of our lifetime. Since they seem to operate in a bit of a hurry (pun intended, it’s not like they’re Tom Cruise on the set of MI7 going in the M5 without doors), the action kicks off immediately after the short exterior walkaround.

We can see the M5 Competition going for the customary acceleration test from a standstill, reaching 267 kph (almost 166 mph) before the traffic on this restriction-free section of the Autobahn triggers another attempt or two. By the way, be patient, because it’s not long until the driver finds a gap and achieves the intended goal.

As such, we can check out the M5 Competition first shift from 6th to 7th gear at around 295 kph (over 183 mph) before reaching a maximum of 310 kph (around 192 mph). That’s actually a bit more than even BMW advertises for the M5 Competition with the M Driver package option, which officially raises the top speed bar to “just” 305 kph (189 mph). 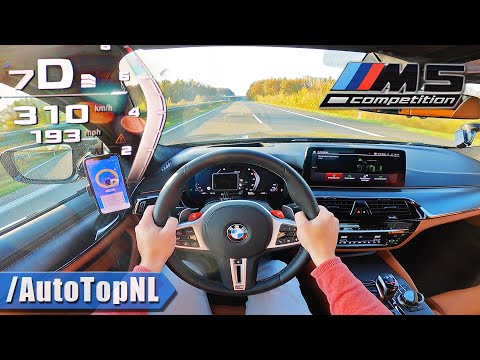