4 What Should You Consider Before Buying an EV?

EV adoption is hindered by people’s perceptions, as they still see electric cars as immature and untrusty. Range anxiety is real, and people still believe electric car batteries are fragile and unreliable. This couldn’t be further from the truth, as this high mileage 2015 Tesla Model S shows after six years and more than 424,000 miles driven. The car was used by the original owner for Uber, which explains the number of miles, probably one of the highest for an EV anywhere in the world.

According to Brian Carlson, who drives and reviews the car in the video below, this Tesla Model 70D belongs to a friend of his. After clocking in more than 70,000 miles (112,000 km) a year six years in a row, you might think the car does not hold many original parts anymore, but you’d be wrong. This Model S 70D still has its original rear drive unit, although the front motor was replaced at around 380,000 miles (611,000 km). Still a respectable figure, we must admit, which few will cover in a car’s lifetime.

Many people are concerned about the Li-Ion battery reliability, knowing what a pain these are in a phone or laptop. Rest assured, car batteries are nothing of this sort, and this Tesla’s battery proves it, being replaced after 250,000 miles. Since Tesla offered an unlimited-mileage warranty for the 2015 Tesla Model S, the battery was swapped free of charge, and the replacement has already covered more than 180,000 miles (290,000 km). Even so, it still offers around 180-200 miles of range, which is only 40 miles shy of a new battery’s performance.

Besides the front motor and the battery, the car needed some suspension parts replaced, all at around 375,000 miles. Other worth-mentioning components that broke up were the Media Control Unit at 335,000 miles (the pesky failing MMC problem) and the AC compressor at around 300,000 miles.

As you can see, these are minor inconveniences compared to an equivalent ICE car and considering all the savings with fuel and maintenance this Tesla Model S still seems like a good idea today. 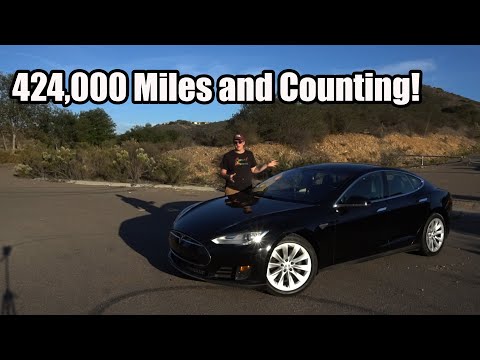