We’ve grown increasingly fond of Shawn and his AutotopiaLA YouTube channel over the recent months – all thanks to his great selection of vintage and customized American vehicles. His attention spans everything, from the swapped pickup trucks of yore to the bagged convertibles craving for some flashy attention. This is why the latest video kind of caught us by surprise.
58 photos

Because AutotopiaLA’s base of operations is in and around sunny Los Angeles, we’re usually accustomed to the West Coast’s automotive mindset – which has a lot to do with great custom builds of mostly American-made cars.

On this occasion, though, a Bavarian is taking center stage, and it's owned by someone who’s developed a little obsession with a particular BMW. According to Shawn, it’s the 2004 BMW M3 CSL limited edition of the E46 series, a model produced in less than 1,400 examples that wasn’t available for export in North America.

Instead, U.S. fans got an OEM alternative the very next year, the 2005 M3 Competition Package, and one example of the series became the basis for this personal project that pays tribute to the CSL. Just as we always like the rides presented by this particular channel, the E46 M3 is yet another car that’s clean as a hound's tooth.

This is because the owner wanted to achieve what he likes to call an “OEM+ form follows function” look for his E46 M3, sporting all the needed upgrades to subtly enhance both power (now at around 360 hp) and the initial design. For example, the front end was changed for one that closely matches the M3 CSL with its famous lower left-side intake breather and all the carbon fiber bits and pieces.

Also, there are some neat personal touches - such as the ducktail spoiler or the swapped six-speed manual transmission which goes against the CSL-inspired build as the latter was exclusively offered with the SMG II auto.

Although squatted, the M3 isn’t actually looking for a lowrider image, instead making use of the KW Variant 3 coilovers to solidify both the CSL tribute from the U.S. point of view as well as improving the overall ride when dealing with twisted roads.

It’s not exactly the case here because with Shawn at the helm, the drive (kicking off at the 6:30 mark) turns into a pleasure cruise designed to allow the host to properly appreciate the special bucket seats (which the owner got before the actual car having paid exactly $7,777 for them!) and the fact that an M3 is always “a proper driver’s car.” 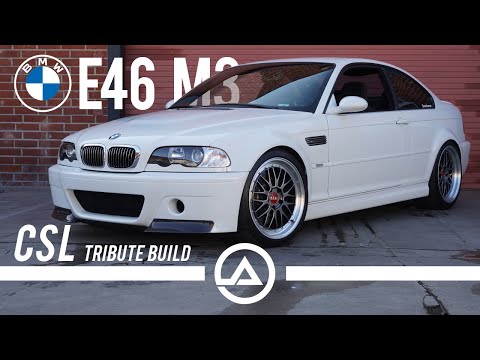