Sebastian Toma
The early Porsche 911 models were rather light vehicles, but that was not enough for some people. Therefore, lighter versions were developed in time. Some enthusiasts went a bit further and lightened their cars here and there, but most have stopped after a certain point. Richard King has not.
6 photos

Now, Richard owns the lightest Porsche 911 that is road legal. Yes, that is an achievement in itself, and it was done after it exceeded its creator's initial plan of turning a poorly-modified example sourced from the U.S. with no drivetrain into a 911 R replica.

The best part about this vehicle is its previous condition, which meant finding its original engine near impossible, thus eliminating it from the list of a potential Concours d'Elegance feature. It did not have a famous first owner either, so that route was also lost, unlike Elvis Presley's BMW 507, which was found, acquired, and restored despite losing its original engine over time.

With intensive grinding, drilling, custom fabrication, and a bit of creative engineering, Richard King managed to get this 1968 Porsche 911 at just 627 kilograms (1,382 lbs.). It still has two seats, all of its functions work as intended, and it comes with a special kind of purity. The kind where you need to wear ear protection if you want to drive it for more than 30 minutes.

Now, before you go ahead and start drilling holes in your project car, you should know that Richard has been modifying cars for decades, and he knows what he is doing. Do not attempt to replicate this, as it may become dangerous on the road for you or other drivers. 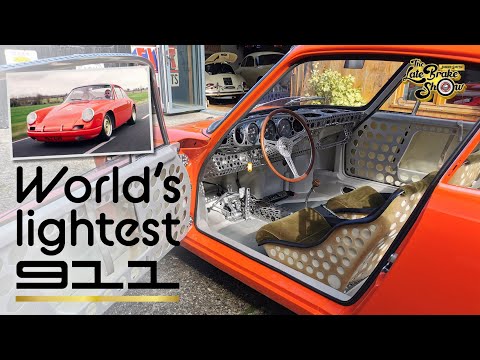