4 1938 Buick Comes Out of the Barn After 30 Years, It's an All-Original Survivor

Originally based on the C-body platform, the Buick Skylark went official in 1953 in the form of a two-door convertible. Twinned with the Oldsmobile 98 Fiesta and Cadillac Series 62 Eldorado, the limited-run luxobarge packs a 322-ci Fireball V8 engine that’s otherwise known as the Nailhead after the vertical alignment of the relatively small intake and exhaust valves.
19 photos

It was a potent lump for the 1950s, but on the other hand, the original engine doesn’t hold a candle to the LS1 in this particular example of the breed. Chassis number A1053076 was refurbished and modified under previous ownership as per Bring a Trailer, which mentions custom-fabricated covers and a cone air intake filter. Connected to a four-speed 4L60E automatic, this mill is perfect for cruising as well as pedal-to-the-metal shenanigans.

Just sold for $88,000 after no fewer than 43 bids, the 1954 model in the featured clips had its oil changed in preparation for the sale. Also worthy of note, the 1954 model year Buick Skylark switched from the Roadmaster chassis to the shorter chassis of the Century. The car that just sold on Bring a Trailer is number 76 of 836 produced, which makes it quite collectible.

Refinished in a beautiful shade of red, this fellow is rocking whitewall tires with the period-correct wire wheels and two-bladed spinners. Front discs and rear drums provide stopping power, and the suspension was reportedly overhauled during refurbishment. On the inside, the cabin has been reupholstered in tan leather and fancy red square weave carpeting.

Gifted with a custom-fabricated center console that houses a Pioneer touchscreen head unit and the controls for the Vintage Air climate control system, this one-of-one Skylark comes with Auto Meter instrumentation framed by a two-spoke steering wheel. The five-digit odometer shows a little more than 3,000 miles (4,828 kilometers), although the small-block V8 engine’s mileage and the chassis mileage are unfortunately not known. 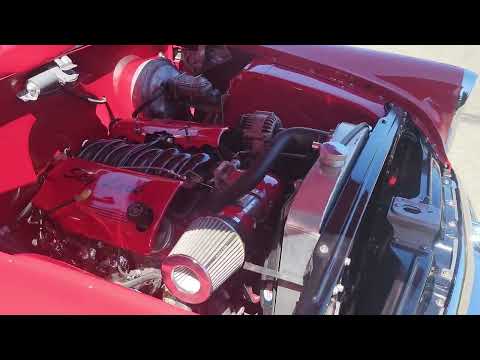