2 Ener1 Gets $20 Million Investment from ITOCHU 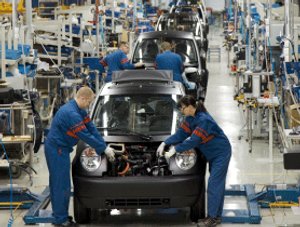 With all the financial troubles of past months now put aside, Norwegian electric carmaker Think announced it has began production of what they call the world's first urban EV, the Think City, at the new Valmet Automotive facility in Uusikaupunki, Finland, the same place where Valmet assembles the Porsche Boxster and Cayman.

“This is a very significant day for THINK. We are back in production and I am so pleased that some of our very loyal customers can look forward to delivery of their long-awaited THINK City before Christmas," Richard Canny, Think CEO said.

"The order bank stands at around 2,300 vehicles, and our first priority is to deliver to these customers now that our vehicles are rolling off the production line again. Our next priority is to build on this order bank with continued expansion in Europe and around the world.”

Think was forced to move production of the EV from Norway to Finland back in August, when it emerged from under protection as a result of a partnership signed with Ener1, Valmet Automotive and Investinor.

“Valmet already has expertise in the EV industry, but with the start of industrial production of the THINK City at our cutting-edge facilities in Finland, we aim to become a leader in the industry," Ilpo Korhonen, Valmet president concluded.

"The start of production is a very important step for both THINK and Valmet, and we aim to grow our strategic alliance alongside the growth of the THINK brand around Europe as more deliveries of the eagerly awaited THINK City are made in the coming weeks.”