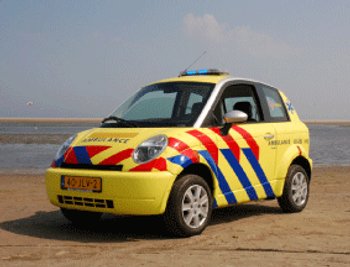 Norwegian electric vehicle manufacturer Think announced that it has found yet another use for its city-intended electric vehicle: an ambulance. Residents on the island of Terchelling in the Netherlands will from now on be given first aid from a Think ambulance, as of now, in service with UMCG Ambulance Service.

"The Dutch company, UMCG Ambulance Service is keen to demonstrate its environmentally responsible ethos, so has decided to complement its fleet of ambulances with an all electric Think City," Think said in a release.

The Think is an electric vehicle which can achieve a top speed of only 100 km/hour (62 mph) and has an acceleration time of 6.5 seconds. With the heater off, the EV can travel in between 170 km (105 miles) and 203 km (126 miles), but the range will be affected by the cold season, the use of the heater and, why not, the visual and acoustic signals used by ambulances. The ambulance is fully equipped with "life saving medical equipment".

The one in use on Terchelling island however is equipped only to provide support to the other ambulances and give first aid to those in need. By itself, it is too small to carry patients, so it will not be used fot that purpose.

For now, only one such vehicle will be in use, but its low maintenance cost and virtually no need to be refueled may turn it into a viable option for small communities. In Terchelling's case, the fact that it is a nature reserve almost makes it mandatory.