1 Model 3's 215 Miles Maximum Range Owes a Lot to Aerodynamics, and Here's Why

3 Doug DeMuro Takes His Hummer H1 to the Drag Strip Because Why Not?

5 Mercedes-Benz E55 AMG Proves You Should Be Careful Who You Challenge at a Traffic Light
Car video reviews:
Coverstory

They say the most difficult thing a person has to do during their life is dealing with their teenage kids in such a way that doesn't land either of them in jail.
7 photos

With that in mind, allowing them to street race the car you bought for them - or the one you bought for yourself only they stole the keys after you went to sleep - means you're not doing a swell job. If they're lucky, they'll get caught for speeding and get off with a ticket and a good scare.

If they're not, they'll crash the car into something or someone, possibly injuring themselves and others, or even worse. But try telling that to a teen, and you might as well be talking to a brick wall. They'll just nod, say "yes, dad/mom" and sneak out with your Mercedes after bedtime.

Kevin McKinnie is a former law enforcement officer and, possibly, also a father. He knows it all too well that the only way to stop kids from racing on the street is to give them an alternative place to do it. Sure, not having that thrill of risking a run-in with the police will make things different, but then again so will not spending the night in jail.

And running into the police is one thing they'll definitely do if they attend McKinnie's event. The ex-policeman thought of a brilliant way that won't just curb the incidence of street racing in the area, but would also tie the bond between the kids and the law enforcement.

He devised a program called "Top the Cops" where high school students can show up at the Sonoma Raceway in California driving their own cars and race a stock police cruiser in a controlled environment. This way they get to see you can have fun without breaking the law, and who knows, maybe some of them will even like it so much that they'll become drag strip regulars.

McKinnie deserves all the credit for what is a simple idea that can have a significant - if not life-changing - impact on the lives of a lot of teenagers. The only problem we see here is convincing some of the parents to agree to this. Then again, it's best they don't know everything the kids do, right? 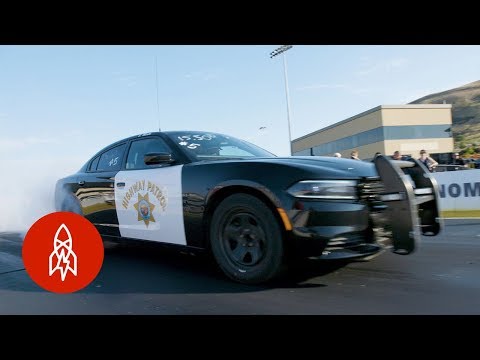