1 Battery-Powered Motocross Bike Is Dubbed the World's Fastest, Comes With a Price to Match

5 Guy Tries to Ride 100 MTB Trails In A Single Day, At 108 Fahrenheit. He Almost Makes It...
Car video reviews:
Coverstory

If you’ve got the will, you’ll also find the way. That pretty much applies to everything in life, including ripping trails as an adult rider on a $30 kids’ bike. Yes, you might take a fall or two and get out of it all bruised, but it might also be so addictive that you’ll want to do it again.
7 photos

Do you keep bumping into your kid’s old, rusty bike they're not using anymore? While giving it or throwing it away might be the obvious thing to do, there’s another solution to it. A much more unconventional one. Why not repurpose it and turn it into your tiny trail wheeler? These guys did it and it sure looks like something fun (to watch).

If you enjoyed Johnny Knoxville’s “Jackass” series, this video will fill your holidays with laughter. Think of the “Mini Bike Special Volume 2” as a “Jackass” episode on two wheels.

The protagonists call themselves “The Firm”, with this name initially being used for their WhatsApp group. Consisting of racers, dads, lads, squids, and youngsters, to quote them directly, this group is up to no good. The Firm loves trail biking and is really good at it. But last year, the guys decided to do something different and started a “Mini Bike Special”, riding tiny kids’ wheelers through the woods. The video produced by content creator Tom Caldwell went viral so now they’re back with the “Volume 2”, just in time to make our holidays happier.

Dressed in Christmas outfits as Santa and elves, the hilarious maniacs go on a riding spree on the tiniest, most unfitting bicycles, which, according to Pinkbike, got subsequently fixed, cleaned, and donated to a local charity, but not before they were abused to the extreme (tonnage-wise).

We’ll divulge no more and let you watch The Firm in action, guaranteeing it will make your day. 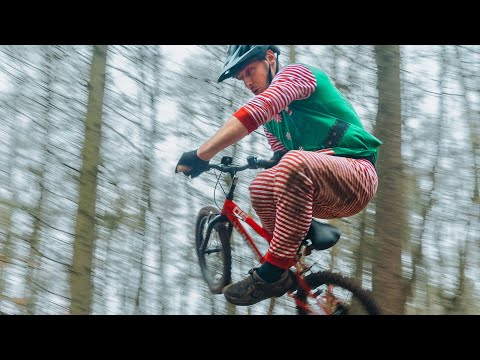