Here’s to hoping you like your Monday coffee with a sprinkle of conspiracy theories. Apparently, there’s a 400-foot (128-meter) superyacht hidden in Antarctica and it’s just been uncovered on Google Earth.
5 photos

Stare at something long enough and you can trick your mind into seeing anything. This could be the case here too, but according to YouTuber MrMBB333 in a semi-viral video from last Friday, it’s not. There is a superyacht hidden off the coast in Antarctica, just south of New Zealand.

MrMBB333 describes himself as an Earth Watchman. On his website, he boasts of monitoring “everything from the sea floor to the cosmos and everything in between,” and of having a 10-year experience in doing so. Much like other conspiracy theorists, he insists his goal is not to push conspiracy theories but rather to point out facts that anyone can see with their two eyes. Like this mysterious superyacht.

The video below starts off with MrMBB333 describing another ice structure that he came across while “monitoring” the frozen continent, one that, he believes, looks too much like a secret facility of some type. It even has several entryways, an antenna, parking spaces and there might even be some vehicles outside of it.

If you’re here for the superyacht only, that part starts at the 5-minute mark in the video below.

“You look down on it and it looks like the outline of a ship,” he says. “This measures 400ft [128 meters] long, whatever that looks like, it looks like a ship. An ice ship if you want to call it – a 400ft yacht just sitting there off the coast of Antarctica.”

Indeed, if you know what you’re supposed to be seeing, you can tell the outline of a cruiser-type of vessel, laying on the side, because that's the only proper way to hide a superyacht. It’s even got window lines and chimneys. This is just like fortune-telling in coffee grounds.

As expected, the video has proved a hit in the community, with many agreeing that there are secrets hidden under the ice in Antarctica – secrets that may or may not include the secret facility and what may be an abandoned superyacht. To non-believers, it’s proved a good way of delivering the LOLs. 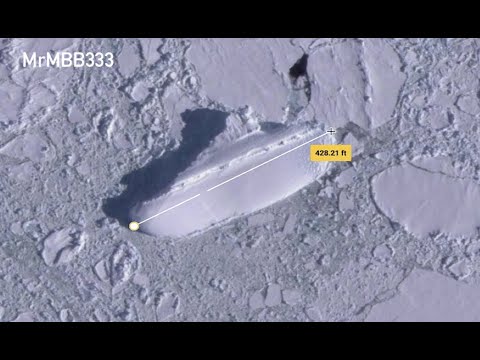