3 The Lacroix Cruiser Is How You Turn an Old Bus Into a Cozy, Gorgeous Home

With the boom in popularity of tiny homes, skoolies are also having a moment. Despite the ever-growing number of skoolie conversions, chosen for their reliability and the larger floorspace they offer, the Yoga Bus is still a stand-out.

The Yoga Bus Is a Skoolie Turned Mobile Yoga Studio, With a Swing and Modular Interior

The Yoga Bus is exactly what its name says: a bus for yoga. It doubles as permanent home to the couple that built it and as a mobile yoga studio, with which they plan to travel the country to reach remote areas and teach the benefits of yoga to people who would otherwise not have contact with this spiritual world.

The Yoga Bus is currently located in Kaipara, New Zealand, in a small community called Tumanako Hope. Tumanako is a tiny home community, a retreat and event venue, and it comprises about a dozen self-sufficient tiny homes of various shapes and sizes, including the Yoga Bus. It was featured on an episode of Living Big in a Tiny House in April 2022, where it became a hit with the community of tiny dwellers.

Built by Isabelle and Norbert, both of them yoga teachers and early adopters of the tiny house lifestyle, the Yoga Bus is a DIY build. As Norbert explains to Bryce Langston from the popular YouTube channel (see the video at the bottom of the page), they wanted to build their home themselves, so they could control the entire process and make sure it was as environmentally-friendly as possible, and also in accordance with the principles they live their life by.
They opted for a schoolbus because of its size. Measuring 12 meters in length and 2.4 meters in width (39.3 x 7.8 feet), the Yoga Bus can sleep up to six people, and provides incredible space for entertaining and socializing. As the other video below shows, it also makes for a great DJ booth when at camp: for the time being, the two are living inside the bus to get accustomed to this new life, but they have plans to set out on their travels soon.

The Yoga Bus has a modular design, which makes it adaptable to a variety of scenarios. Isabelle and Norbert often host yoga sessions at their new home on wheels, so it has to be able to sleep a larger party. From the front of the bus up until the kitchen, each side is designed symmetrically, with furniture that has multi-functionality. Couches become beds, or dinettes, or individual cots with privacy curtains (resembling a tent inside a bus), depending on what’s needed, and there is still enough space to move around and not feel cramped.

The kitchen also occupies both sides and is complete, including a propane stove and oven, sink, extendable countertops, and plenty of storage – including upcycled second-hand storage boxes from an Air France airplane, or a cabinet made up of small boxes with parts from the grille of the bus for doors. Moving towards the rear, there’s the compost toilet on one side, and the wet bath on the other, with a shower with a French wine barrel for a tub, and a sink with vanity.

Similar unique touches appear in the master bedroom, which sits higher, at the rear of the bus. For example, beehive boxes are used for drawers, and an old tool box now serves as a very fancy tiny locker. The bed has storage underneath, and there’s also a full wardrobe for hanging clothes.

Norbert says the Yoga Bus is completely self-sufficient: there are solar panels on the roof and batteries for power, and water tanks in the former storage compartments below. There is no dark water tank, but there’s a freshwater and gray water tank, with the former getting replenished with rainwater collected from the roof of the adjoining terrace. For food, he and Isabelle rely on what they and the others grow inside their tiny community; the on-site farm includes poultry and alpacas.

Aside from the Yoga Bus’ modular interior, what stands out about this build is the way in which materials were sourced and used. Canvas is used to create separate spaces and offer the illusion of privacy, with the aforementioned indoor tent, the door that separates the bedroom from the rest of the bus, and the doors to the bathroom. Netting is used for storage, in places where adding a door would have taken too much space.

Up on the roof is a yoga deck, which is ideal for meditation and, you know, just enjoying the sunset – and life in general. But the most surprising feature is, without a doubt, the swing over the front steps, which lets you swing right in the doorway. That’s not something you get to see in every skoolie, you have to admit.

“Bus life is perfect yoga life, because you are contained and you are centered in a tiny space, and you are safe,” Norbert says. The Yoga Bus cost NZ$50,000 (US$31,300 at the current exchange rate), including the $8,500 (US$5,400) for the bus, because all the work was done by Norbert and Isabelle, and much of the stuff onboard was upcycled. 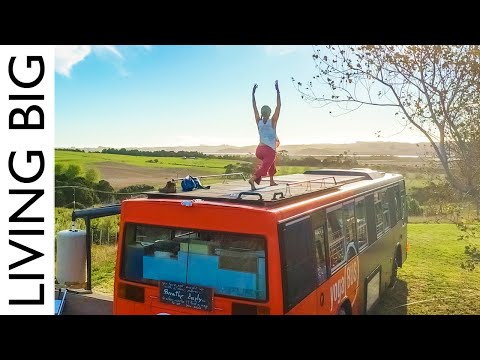 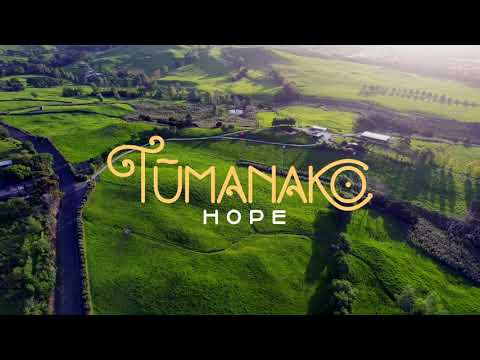