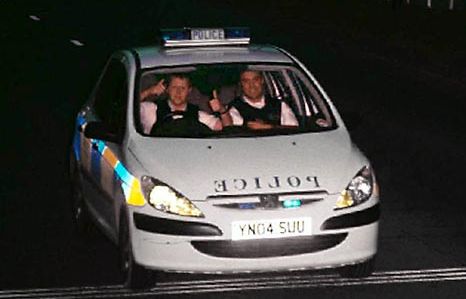 Just how fast do you have to travel to cheat one of the biggest foes motorists have on the street? Yes, we’re talking about the speed camera and the answer to that question is a lot more difficult than you think.

Knowing how fuzzy a picture can become if you move at the point the shutter snaps, many of us push down the acceleration pedal and cross our fingers that we’ve passed fast enough to blur the shot of our license plates. The answer to that gamble usually comes in the mail a few days later in the form of a ticket. Technology wins again.

Well, even more bad news for all the motorists out there, as British tabloid The Sun has uncovered that there is another breed of speed cameras out there, one that is capable of capturing on film even the most audacious daredevils with the fastest cars.

The camera paid its dues when it caught on film several speeders who were racing in the Carbon Black Rally. Those of you scratching their heads right now, should now that the Carbon black series is an invitation only even for the super rich and it aims to take the millionaires and their supercars across Europe at head-spinning speeds.

It seems that those speeds weren’t dizzy enough on a bridge in Venice, Italy, where the camera “busted” a McLaren SLR, a Ferrari, a Lamborghini and a Porsche doing what they do best: eat up miles and miles of tarmac like nobody’s business. Except this time it was illegal and dangerous to other motorists. We’re talking about speed in excess of 200 mph in some cases.

Rest assured that Italian police will find the owners and send them the aforementioned photo and the accompanying bill. Hope they thought it was worth it. As for the rest of us, the common folks who drive diesels, caravans and SUVs, we can only hope the camera is not turned on as we zoom by.