2 It's Time to Buy Yourself a Competent Fire Truck, and This Toyota Dyna JDM Is Just Perfect

4 Times Are Tough, Buy Yourself a 585-HP Diesel Fire Truck

Cristian Agatie
If friends ever ask you why you’d want a fire truck in the first place, make sure to drive one at the 4th of July parade in your neighborhood. The reaction you’d get is priceless; plus, you never know when the need arises to use that powerful pump and the big water hoses.
16 photos

Grumman Emergency Products built this beautiful fire truck in 1986 as an FC-1000 model. It wasn’t exactly a parade truck, as it was used by the Bowman’s Addition Volunteer Fire Department in Allegany County, Maryland, before being acquired by the seller in February 2022.

It comes with everything needed to extinguish fires, including a water tank, water pumps, a Winco generator, and electrical power outlets. Of course, it has emergency lights and sirens, and you can sample some sounds in the video below.

Also, since you are there, look at the driving skills that the seller exhibits in the video. We figure he calls himself ‘grandprix231’ on Bring a Trailer for a reason. He tackles that mountain road like nothing, and the truck drives like a sportscar. This is undoubtedly helped by the mighty 10.4-liter Caterpillar 3208 turbodiesel V8 engine. People say this is indestructible, and we have all the reasons to believe so.

The truck is in good condition, despite the dent in the rear bumper and the fuel gauge not working. It also comes with automatic rear tire chains that can be activated by a dash-mounted switch. It’s a pretty neat piece of equipment if you live in an area where snow is expected during the winter. The seller also mentions that the fuel tank was replaced in 2017.

This fire truck sells on Bring a Trailer with no reserve, making it an excellent proposition as you have the chance to get it for a reasonable amount of money. The highest bid is $2,000 right now, but it’s too early to predict the final price. There are still six days until the auction ends, so make sure to place your bid if you fancy a fire engine at your door, ready for action. 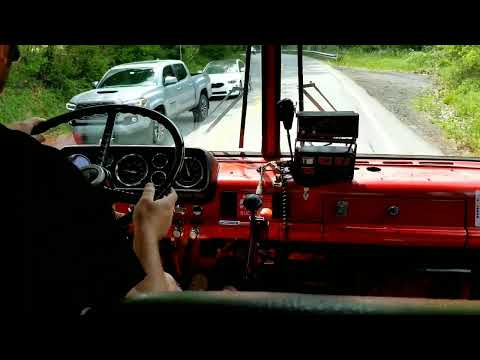