1 Winter Is Coming, and You Should Explore Machines Like the Timeless and All-Season Forager

4 Guy Reinvents the Wheel, Cuts It in Half to Make a Fully-Functional Bike

5 Insane Range for Low Bucks Is What the Commuter E-Bike From State Bicycle Co. Is All About
Car video reviews:
Coverstory

Do you remember the days in schooling when we attended math classes? The most common question was when we would ever use trigonometric functions or other mumbo-jumbo in real life.

Well, one YouTube channel has recently shown off exactly what can be achieved with nothing more than mathematics and a bit of elbow grease; a bicycle with two halves of one rear wheel that flows to keep you rolling no matter what else you end up hitting. Best of all, you can follow along with the steps detailed in the video and make your own mathematical wonder.

Now, the video has been uploaded to The Q, a YouTube channel with wonders we've covered before. The most familiar is a bicycle presented about a year ago, an ice cycle. While you'd expect any bike designed for ice-covered roads to boast nothing but some studded tires, what made this thing so out there was the fact that it used massive saw blades as wheels. Yes, the kind used to cut lumber; talk about grip.

As for this time around, the channel's host starts the video with what seems to be nothing but a bad spell, hitting a curb on his bike and breaking his rim. Instead of just grabbing a new wheel and replacing the existing one, the channel's host (possibly The Q himself) decides to get creative, and before we know it, he can be seen in a shop exploring his ideas.

As we follow along with the video, it soon becomes apparent that, indeed, this one-off design is just for the fun and dynamics of it all. I say this because the damaged wheel is used to create one half of the bike, while the other intact one is chopped up and made to function as the other half of the mechanism. In the final stages of this project, we can see that the front has been replaced with a classic spoked wheel.

Now, I'm sure you've asked yourself how these tires are holding any air in them; heck, they're cut in half. Well, the answer may surprise you and is rather budget-friendly, too, PVC piping. No joke, a PVC tube is inserted into the tire's air chamber and seems strong enough to have the host riding around town for quite some time.

Once all the necessary pieces have been prepared, it's time to go to town with rivets, welding, some cutting, lubing, and figuring out how to make the rear construction move in unison so as to never encounter an unsupported rotation; the two halves complete a circle when in motion. This is the real trick behind this bike.

To do that, the host realizes that each wheel must include its own chain sprocket, so one half features a simple chainring, but the rear most section contains a full cassette, allowing you to change gears too. We aren't shown the process of lining these puppies up correctly for it to work, but you can imagine it's going to be an adventure to get right.

The last few moments of this video showcase precisely the product of all that tinkering and questionable approach to building a working bike, and can I say that I am impressed. Why? It's exactly that; it works! Sure, it looks odd, but mathematics for the win, again. I wonder what we're going to be seeing next. 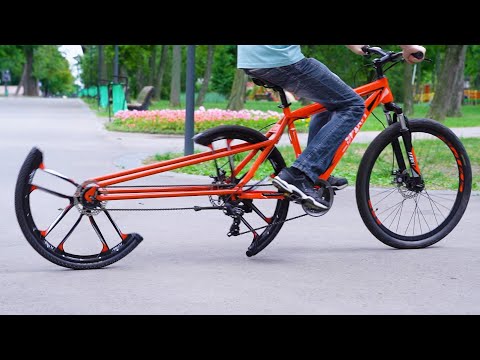