It was only two days ago that we first caught wind of the 6x6 RAM 1500 TRX called "Warlord", the creation of the same guys from Apocalypse Manufacturing that are behind builds such as the Jeep Hellfire, Doomsday, or Sinister 6.
10 photos

The vehicle looked as promising as you'd expect from the very basic description of taking the excellent RAM 1500 TRX and adding an extra axle at the back. It's a tried and tested recipe that's worked for other models - Jeeps, Fords, even Chevrolets - so why not for the coolest truck you can currently (try to) buy off the shelf?

The Warlord is not the first 6x6 TRX, though. That honor goes to Hennessey's Mammoth 6x6, though the offering from the Texas-based company came with a highly prohibitive price of $500k. It also packed considerably more power than the Warlord that keeps the Hellcat V8 you get with the TRX (Hennessey replaces it with its proprietary Hellephant V8 for an output of 1,200 hp), but that's not to say that Apocalypse Manufacturing's truck is a slug. Quite the contrary.

Showing his love for trucks in general and 6x6 ones in particular, Street Speed 717's Mike traveled to Ford Lauderdale, the home of Apocalypse Manufacturing (AM), to test drive the new vehicle. As someone who owns a regular TRX and drives it basically every day, he's probably one of the best-qualified people to judge the work of AM.

After a condensed test drive that only saw the truck deal with the Ft Lauderdale paved roads - with the occasional bump providing a brief off-road flavor - Mike declared there was no perceivable difference between the way the 6x6 felt on the road compared to the regular TRX.

Well, that was quickly proven to be false when he and his friend, Bobby, tried to navigate the tight driveway of a McDonald's Drive-Thru, but we guess he meant everything apart from its size. Speaking of size, people tend to see 6x6 builds as fads, ignoring the fact that the extra length is actually translated into a longer bed, which can be very useful.

For all the customization that goes into making this vehicle, the AM team managed to find a very simple solution for the branding on the tailgate. Instead of complicating things, they simply swapped the RAM letters around to spell WAR, with the M flipped. It's a small thing and everyone knows you can flip an M to get a W, but we still find it cool.

The Warlord 6x6 costs $250,000, which is half of the cost of a Hennessey Mammoth, assuming you could still buy one of those. Considering the TRX can cost less than $100,000, that's still a massive premium for an extra set of wheels that's going to hamper your fuel efficiency significantly. However, the people who love 6x6s don't really care about stuff like that so, everything considered, it's probably a bargain. 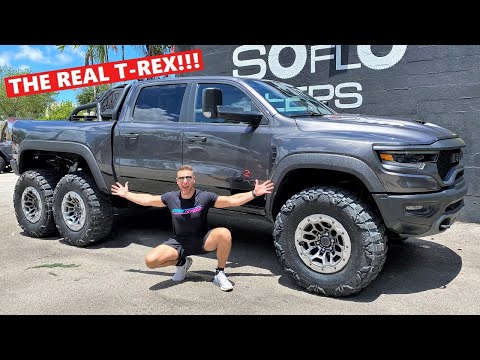