There’s a lot you can do with a tiny space if you plan right and make the most of every little thing you have. The Volkswagen Doubleback is one such example: a van conversion that delivers tiny home-like spaciousness and comfort in a very surprising tiny footprint.

These days, pop-up and slide-out campervans are no longer a rarity, but that wasn’t the case back when the Doubleback first emerged on the market. Back then, it was, as reviewers called it, the most innovative camper on the UK market, the Swiss army knife of campervans, and a transformer even James Bond would love. That last comparison is a bit exaggerated, but the reality is that the Doubleback was very ingenious.

Conceived by Craig McCormack in 2009 and developed across a period of 9 months, the Doubleback was introduced at Vanfest 2009. However, it wasn’t until later, in 2012, that it would cause serious waves, through a partnership with Danbury Motor Caravans. Danbury and McCormack partnered to introduce the first generation of the Doubleback, with the second-gen model introduced with significant improvements next year.

August is Travel Month here on autoevolution, and the VW Doubleback is a perfect fit because it’s the ideal family vacation vehicle, a nearly complete solution for long trips and stays in the great outdoors, without the hassle of having to tow a trailer or drive a much larger vehicle.

That said, we might as well start off by noting that it doesn’t seem like it’s available anymore: there is still a website you can use to contact the makers, but the official social media pages haven’t been updated in a couple of years. Questions from wannabe future customers and other interested parties go unanswered (at least publicly), and no one seems to have seen one such Doubleback in real life, with the exception of the two models previewed. We reached out to Doubleback for additional details on production, and we’ll update the story when and if we hear back.

In the meantime, the VW Doubleback is quite the unicorn: a gorgeous, gleaming, sparkling and magic unicorn slash campervan that made a brief splash on the market and then seemingly went away for good.

The idea for the Doubleback was elegantly simple and, because of it, brilliant: take a Volkswagen Transformer van and convert it into a family camper without it losing its daily driver capabilities. This way, you’d get a spacious tiny home-like camper, but still have a van that would be easy to drive and park in the city. This was achieved through a pop-out module that slid out the back electronically and then self-leveled on two pegs. Using “aircraft industry techniques and materials,” the makers built the pod out of honeycombed aluminum, which made it very lightweight yet durable.

The module nearly doubles the interior space, while weighing just 150 kg (331 pounds). Moreover, it comes with a max payload of 600 kg (1,323 pounds) when it’s leveled on the two pegs, which means you can slide it out even with all your gear in the back. At the same time, when the extension is not in use, you can still drive the van on the daily and even haul stuff in it, as everything but the galley packs neatly away.

The first-generation model differed greatly from the second-gen one, with the latter being the more elegant and space-efficient of the two. It also came with a very important upgrade: since it offered sleeping for four (two on the extendable rear bench and two in the bed up top), it also offered belted seats for as many. The first model slept four but could only seat safely two people in the seats up front, which wasn’t exactly any parent’s idea of a jolly family trip with the kids.

Inside, under different layouts, the two models offered the same features: bed and a lounge area that was also a dining room, a small kitchen with the bare necessities, and some storage space. With the pop-up, you had standing height inside when the bed wasn’t dropped down. Speaking of which, marketing materials never showed the drop-down bed in the pop-up tent.

The second-generation model included more space for the kitchen (it even had a proper oven, larger sink with fresh water, and countertop), additional foldable seats, additional foldable tables, and more storage, all of it possible through a redesign of the layout. Customization options were offered, from the choice of interior materials and colors, to the position of the galley depending on whether you wanted a right-hand or left-hand-drive, and the number of belted seats you wanted.

The first Doubleback was priced at £55,000, which is roughly $76,000 at the current exchange rate. The second-generation model was offered with a price drop, at £48,000 ($66,000), or you could bring your own Volkswagen Transporter van, in which case you’d only pay for the conversion.

The videos below are media previews / reviews of the two models. They are, as far as we can tell, the only Doublebacks in existence: even the official website includes screenshots from these videos in the official photo gallery. Even assuming more such conversions were made and that they’re still available today, the VW Doubleback remains a camper unicorn. 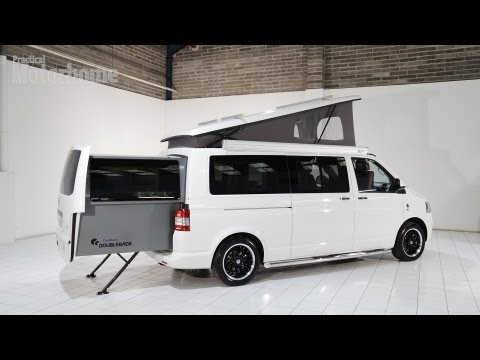 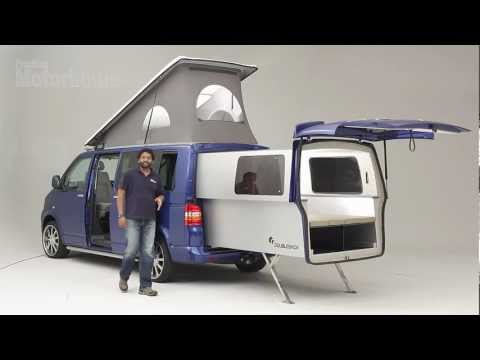 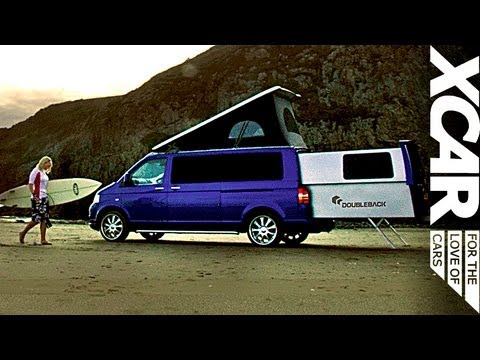