2 Evangelina Is a Ford Transit Van Turned Tiny Home, Great for a Family of Four

5 Tofu DIY House on Wheels Is a Soul-Healing Place Based on a Retired Ford Ambulance
Car video reviews:
Up Next

Just because it’s based on a crazy idea or has a more unusual appearance doesn’t mean it’s wrong – or, in the case of Steve Jones, impossible. A former RAF engineer, Jones had always dreamed of a very unique caravan, and now he can boast of having built it with his own two hands.

While a large percentage of the world’s population was either baking sourdough bread or reorganizing closets as the 2020 international health crisis took over, Steve Jones from Lancashire, England, was finally setting to work on his dream project. He had been sitting on the idea of a caravan (trailer, as it’s best known outside of the UK) built out of a jet engine housing since 2013, and he finally had one such nacelle in his backyard.

Jones’ dream trailer was very specific: as a former RAF (Royal Air Force) engineer, he had serviced several aircraft at the base in Brize Norton, Oxfordshire, but he had also done work on a Vickers VC10 jet airliner, with which he had become fixated. It was a VC10 engine that he dreamed of converting, but it wasn’t until 2019 that he was finally able to buy one at an auction of decommissioned RAF jets.

The unit in his possession was the fourth engine nacelle off VC10 XV104, and he turned it into a 4-berth trailer that now goes by the name of the VC10 Caravan Pod. It was most recently shown on George Clarke’s Amazing Spaces show on Channel 4, bringing Jones a sort of unexpected but still welcome brush with international fame.
It also brought him several, quite serious offers for the trailer for as much as the equivalent of $30,000. That’s a lot of money, considering the whole project only cost him roughly $4,600. Of course, this amount doesn’t include the over 1,000 hours of work he and two friends (and Clarke himself, though in a much smaller percentage) put in for the conversion. On the show, Jones said the project was “a labor of love,” one that posed unexpected challenges to him every step of the way.

Getting the engine housing of the British-made quadjet was the easiest part, as he soon found out. After stripping it of wires, clips and pipes, he had to even out the bottom, so that it would sit on a trailer. He then clad the interior in plywood, which sounds easier said than done because of its rounded shape, and added carpet lining over it.

Inside, Jones imagined a space that would offer him and his family the basic creature comforts while on family holidays. The VC10 Caravan Pod is by no means a complete solution, and it’s definitely not made for off-grid living or anything too wild, but whatever it lacks in this respect, it makes up for in personality. This is a jet engine housing converted into the most basic trailer, but even so, it’s still able to offer sleeping for four people and some amenities.

The 4-meter (13-foot) long Pod has two doors, with the largest located at the rear and opening up to allow al fresco dining (sort of). It also has a skylight and a large window at the front, which bring in plenty of natural light and much-needed breeze. There’s a small kitchen on the right hand side, with a two-burner oven and a small sink, and some storage space. It’s not the kind of kitchen you can cook in for an entire dinner party, but it’s perfect for some light meal prep on a weekend getaway.

Opposite the kitchen is what you might call a display shelf that reminds guests that they’re standing where a jet engine would have been. Not that there’s a chance anyone could forget that.

At the rear is the dinette, which seats four on two couches. The same couches convert into beds: the seats fold out and become the “master” bed, while the backrests lift up and become bunks for the kids. The set-up is particularly creative, especially considering the cramped space and the complete absence of corners or sharp angles.

According to Jones, the set-up is also functional. The VC10 Caravan Pod went on its maiden trip with the family in May 2021, with the builder declaring it “very stable to tow and very light.” It’s been on the road ever since, except for really cold days. 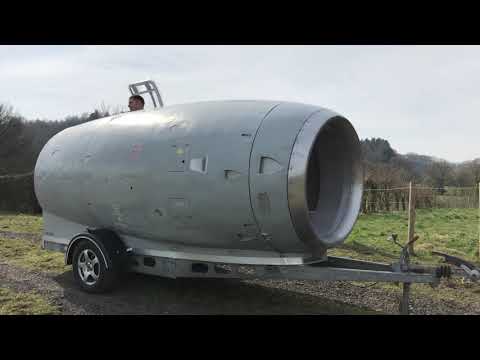