1 Russian Gold King’s Megayacht Trapped in Fiji as the U.S. Is Trying to Seize It

The Design for the World’s First Floating Sustainable City Unveiled

On February 24, 2022, Russia invaded Ukraine. As a response to the violent attack, international authorities have decided to sanction Russia economically, including through the seizure of oligarchs’ international assets. “Cut the funding, discourage the war” was the reasoning.

The U.S. Has to Pay for Billionaire’s Superyacht After Seizure, and It’s Not Cheap

Days after the sanctions went into effect, authorities in the European Union, the United Kingdom, and the United States moved to impound assets of known allies of President Vladimir Putin, including super- and megayachts, luxury real estate, private jets, and supercar fleets. Each capture was duly announced, documented, and applauded in the media.

But what happens after authorities from another country seize one such piece of property? The case of Tango, owned by Ukrainian-born oligarch Viktor Vekselberg, the founder of Russian conglomerate Renova Group, which deals in anything from telecoms to oil, energy, and aluminum, might be a telling example. When a football-field-sized superyacht is seized, the problems don’t end. They’re just starting.

At the beginning of the month, U.S. federal agents and agents from La Guardia Civil descended onto the Tango superyacht at the Marina Real in Palma de Mallorca, Spain. Tango was sailing under the flag of the Cook Islands, but it had belonged to Vekselberg since 2011, and authorities from both countries had been able to confirm its ownership. As such, they seized it. Hooray? Not so fast.

Delivered in 2011 by Feadship, Tango might not be the biggest or most expensive floating palace in the world, but it’s still an impressive piece of machinery by regular people’s standards. It measures 254 feet (74 meters) in length and is believed to have cost anything between $90 million and $120 million.

To an oligarch, that difference of “just” $30 million could be pocket change, but it makes all the difference when it comes to annual running costs: as The Daily Beast points out, the annual carrying cost of any vessel is usually 10% of its price, and it can go up if the yacht is super-fancy and sophisticated, or spending more time at sea than moored.

When assets are seized as part of an ongoing legal dispute in the U.S., the U.S. Marshals Service steps in, and it’s required to maintain the assets as they are until the case ends, whichever way possible. This could mean getting the money from the owner or auctioning the asset off and putting the money in escrow until the case is resolved. Vekselberg has been charged with bank fraud, and he’s on the sanctions list, which means that the same U.S. Marshals Service has to cover the yacht’s running costs because he can’t, since all his international assets and liquidities are frozen. He couldn’t even if he wanted to, as the same media outlet points out.

From this perspective, seizing Tango feels more like a burden than an accomplishment since the U.S. has to pay for it, even as it stays moored in Spain. The longer the bank fraud case drags, the more money the U.S. will sink into Tango to keep it in the same seaworthy condition is it now. The best estimate is that the case could take five to 10 years before it’s adjudicated.

“A Bugatti can be kept under a tarp in a garage until a case is concluded,” says one federal law enforcement official. “The same can’t be said of a yacht that’s the length of a football field.”

Indeed, you can’t put a superyacht into dry storage under a tarp like you would do with a supercar. Stefan Cassella, former federal prosecutor and expert on asset forfeiture and money laundering law, tells the publication that U.S. authorities might have to choose between auctioning Tango off to pay for costs already incurred or simply sending it to the scrapyard to avoid future ones. The problem with the former option is that markets are tanking, including the niche of luxury vessels. 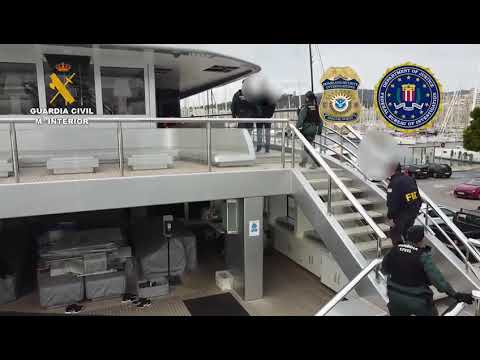