1 Unimog U 20, Firefighting in Croatia

3 The Mercedes-Benz Unimog Crowned the Off-Roader of the Year 2009
Car video reviews:
Coverstory

The UNIMOG - From Agricultural Drop Top to Tuner Ride 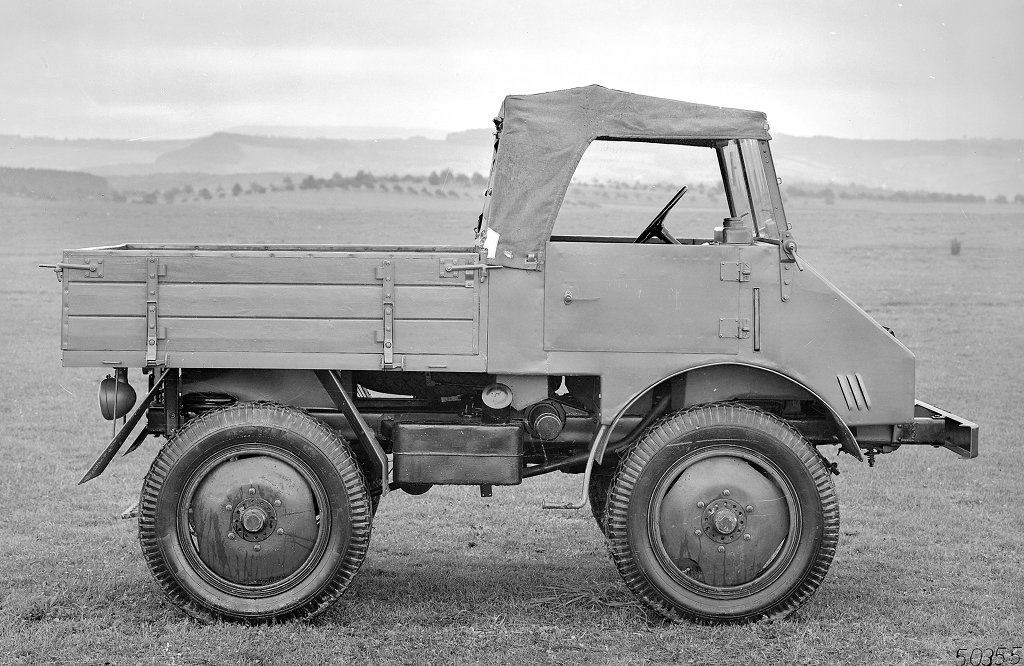 The Unimog’s birth was a rather disturbing process. In 1944, Germany was on the pathway of becoming an agrarian country and the 1945 bombing didn’t do much to help the state’s industry. It was this environment that forced Albert Friedrich, the former head of Daimler-Benz’s aircraft engine research division to develop a bespoke agricultural vehicle.

Many self locking differentials, low gears and one year later, the prototype was born. The vehicle was a cocktail that had been created by adding some tractor flavor to a truck. Other ingredients included equal-sized wheels, four wheel drive, high ground clearance, power take offs at both ends and a small loading platform. Oh, and the machine tolerated two humans in its open cab.

The first production Unimogs came to the world in 1947 and they were powered by a 25hp diesel engine. By that time, the vehicle had received its “Unimog” name. It was baptized by one of the company’s engineers who created an acronym from the name UNIversal-MOtorGerat (universal-power-unit). In 1951, the vehicle entered the high class, starting to wear the three-cornered Mercedes star, as the company took over its production (the early models were assembled by Boehringer, wearing an “Ox-head” badge). This was the Unimog 401. The German company started building multiple versions of the Unimog, offering different types of cabins (the closed cab first appeared in 1953) and two types of wheelbases.

In 1955, the young truck officially enrolled in the army, as Western Germany regained its sovereign country status. Some of the Unimog officers were real bad boys, as unofficial reports show that they could run at speeds of up to 68 mph (110km/h) and could reach a fuel consumption of 3.92 mpg (60 liters/100km). But these were not agricultural vehicles anymore, as we are talking about the 82 hp six cylinder gasoline-powered 404 S series, which was a mobile cross-country truck; we like to regard it as an off road army Grand Tourer. 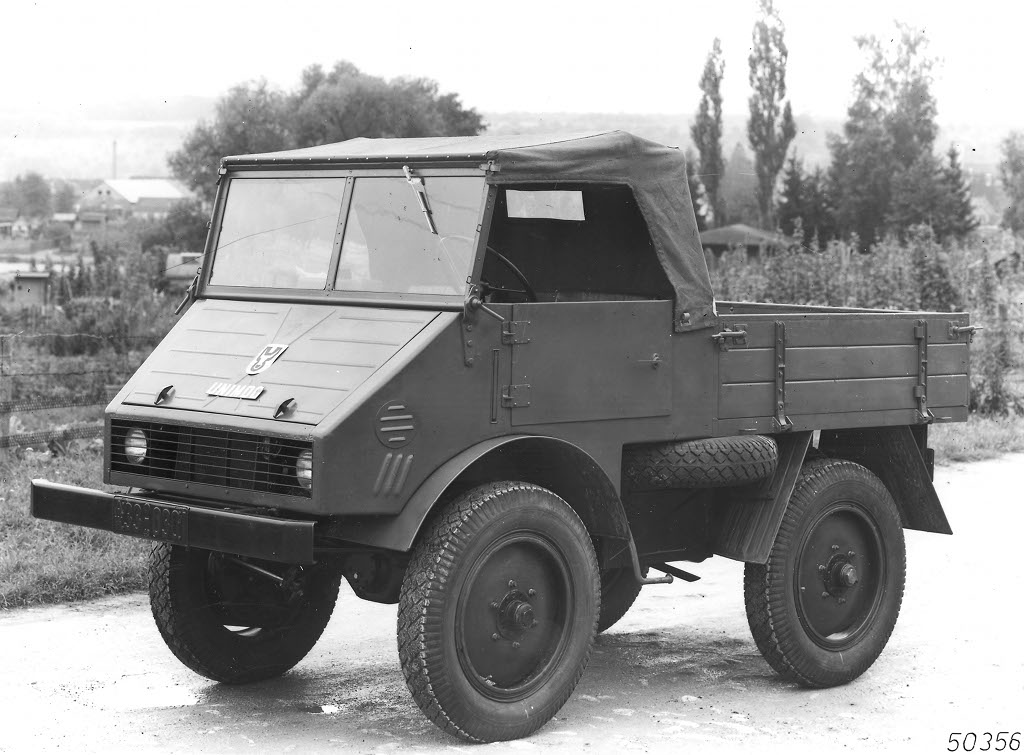 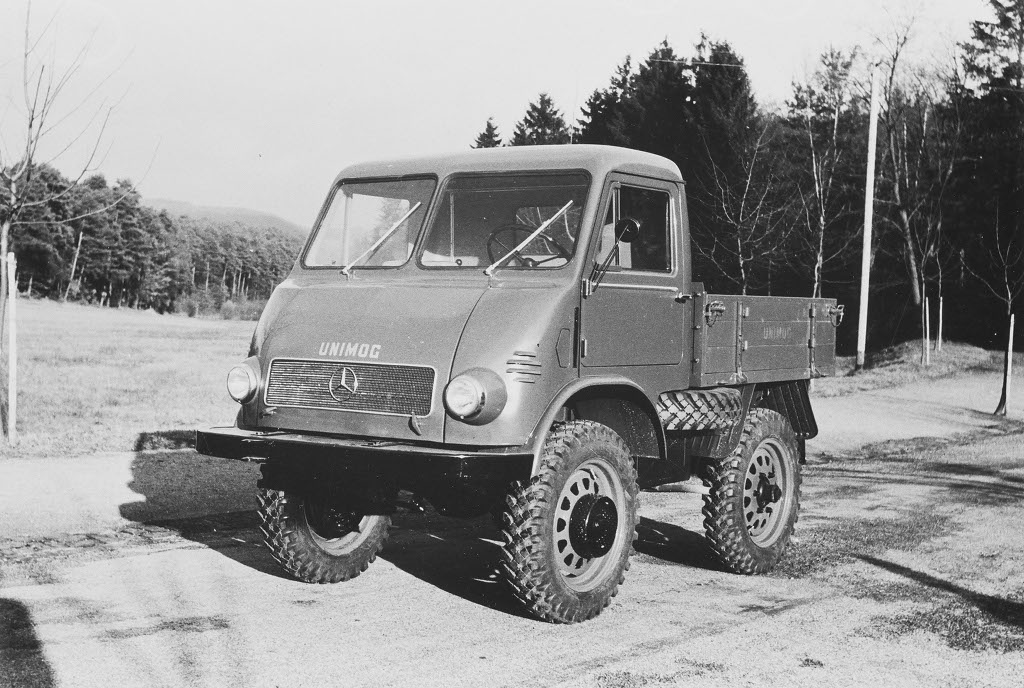 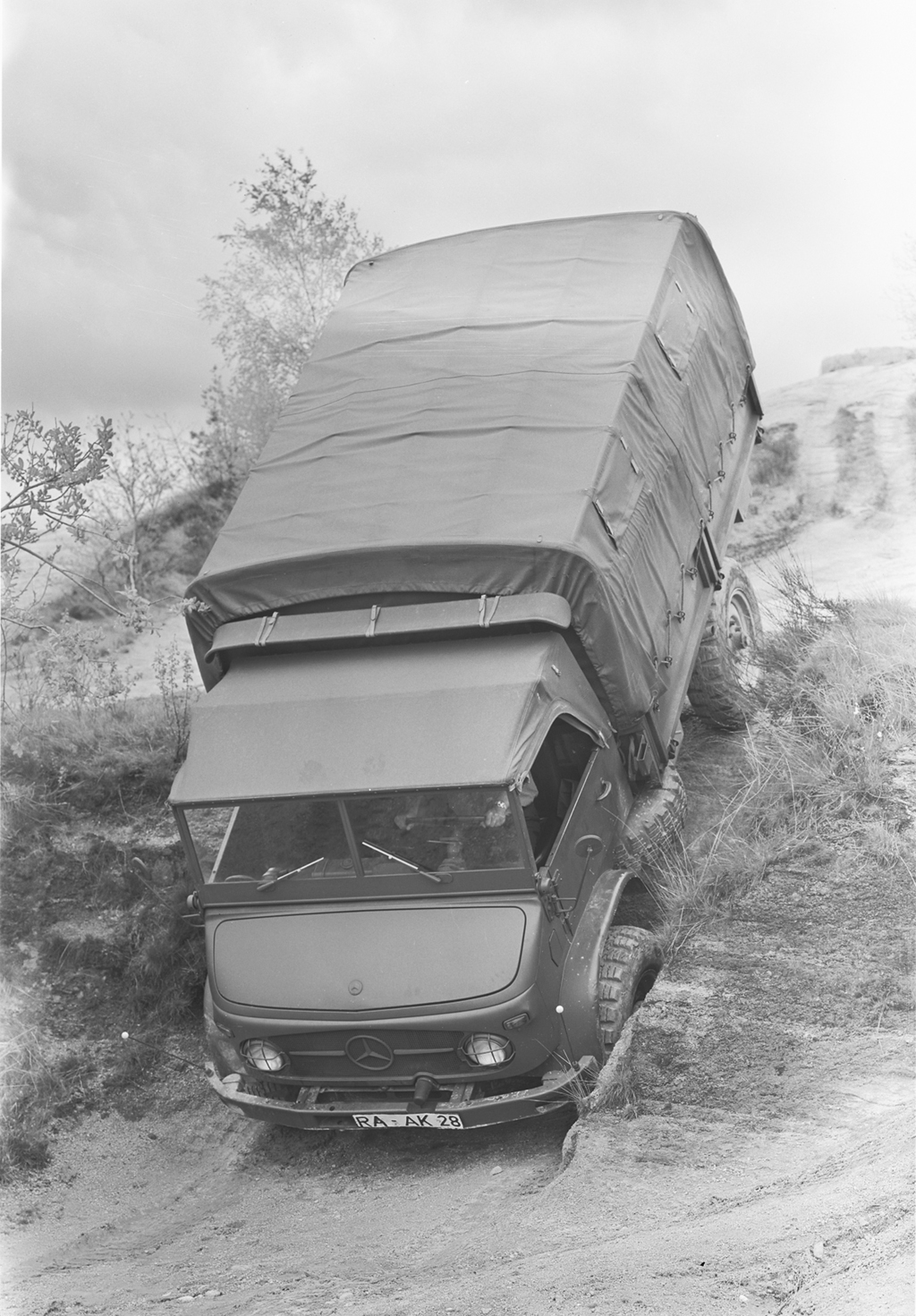 The 1960s saw the birth of the 406/416 middle series Unimog. Our hero received two additional cylinders that enabled it to offer 65 hp. The truck became a little bit addicted, started injecting diesel directly into its cylinders and ended up developing 110hp. 1966 saw the world welcome its 100,000 Unimog. By that time, the vehicle had taken up cargo delivering, fire-fighting, “ambulancing” as well as nuclear, biologial and chemical decontaminating.

By 1971 an army of 171,000 Unimogs Patrolled the world. In the 70’s, Daimler also started playing with the Unimog’s drive components, with the the move ending in the creation of the MB Trac, a true tractor. However, this never managed to become a commercial success.

The mid seventies saw the company introduce the big UNIMOGs. The U120, as the truck was called, used a 130hp unit, eight forward and eight reverse transmissions and featured an impressive 46 degree angle of approach. The vehicle cab’s angular design that featured a generous hood sloping to the grille, would stay with the Unimog until 2006.

In 1975, a new military version of the Unimog was introduced (435), with the vehicle being available in three wheelbase versions. This was the successor of the S 404, but the two vehicles would conquer the world together for many years, as the initial version would not be discontinued. One year later, Daimler developed a new middle series of the light truck. The flagship U1700 model of the range offered 168 hp. The Unimog had also learned new skills, as it was now available in an “engineer’s version”, which came with a 45 meter winch cable, multiple tool kits and a 22- V, 4000 watt generator. To symbolize the fact that the truck was a grown-up, Daimler renamed the entire line-up, with the round driving cab series becoming the “light” series and the new angular cab being split (by payload) into a middle and heavy series.

The truck’s pulling power(achieved thanks to its torque and gearing) allowed the Luftwaffe to use it as aircraft towing tractor. And we’re not talking about the large version of the truck, but about the middle series. Other army units ordered Unimogs equipped with special excavating gear. In 1977, the good-for-all light truck reached the 200,000 unit milestone. The 404 series was still in production, with the model being the only gasoline-powered Unimog. 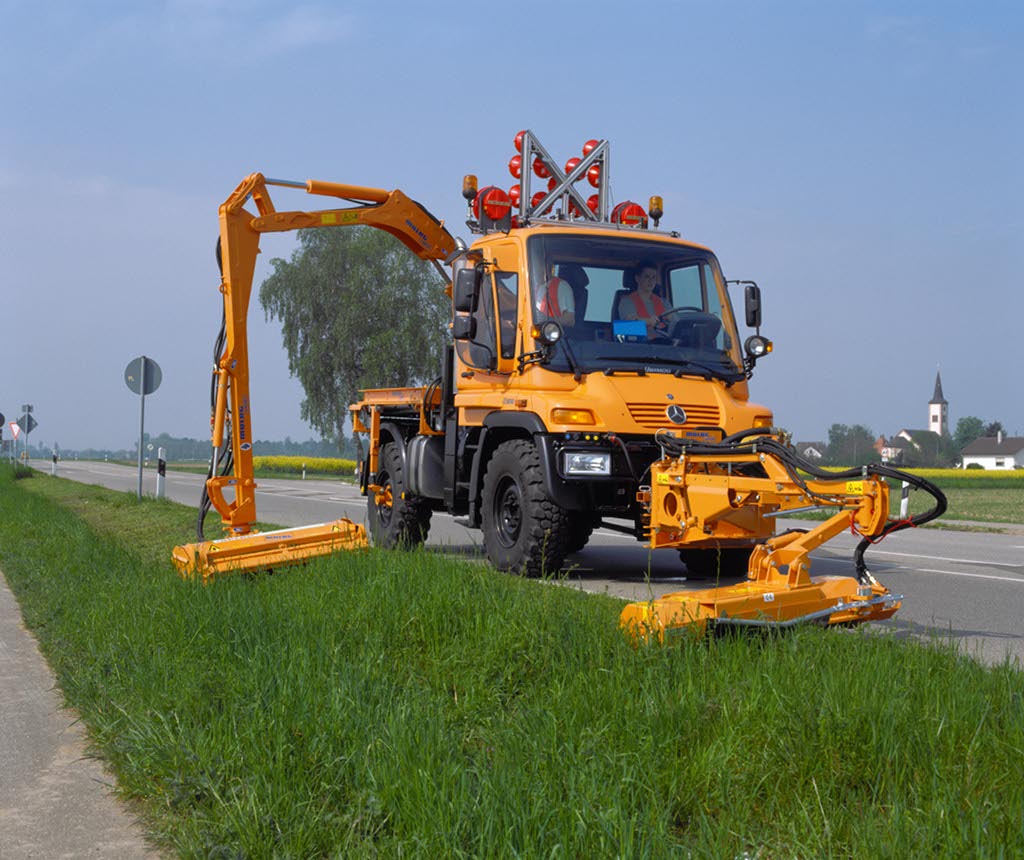 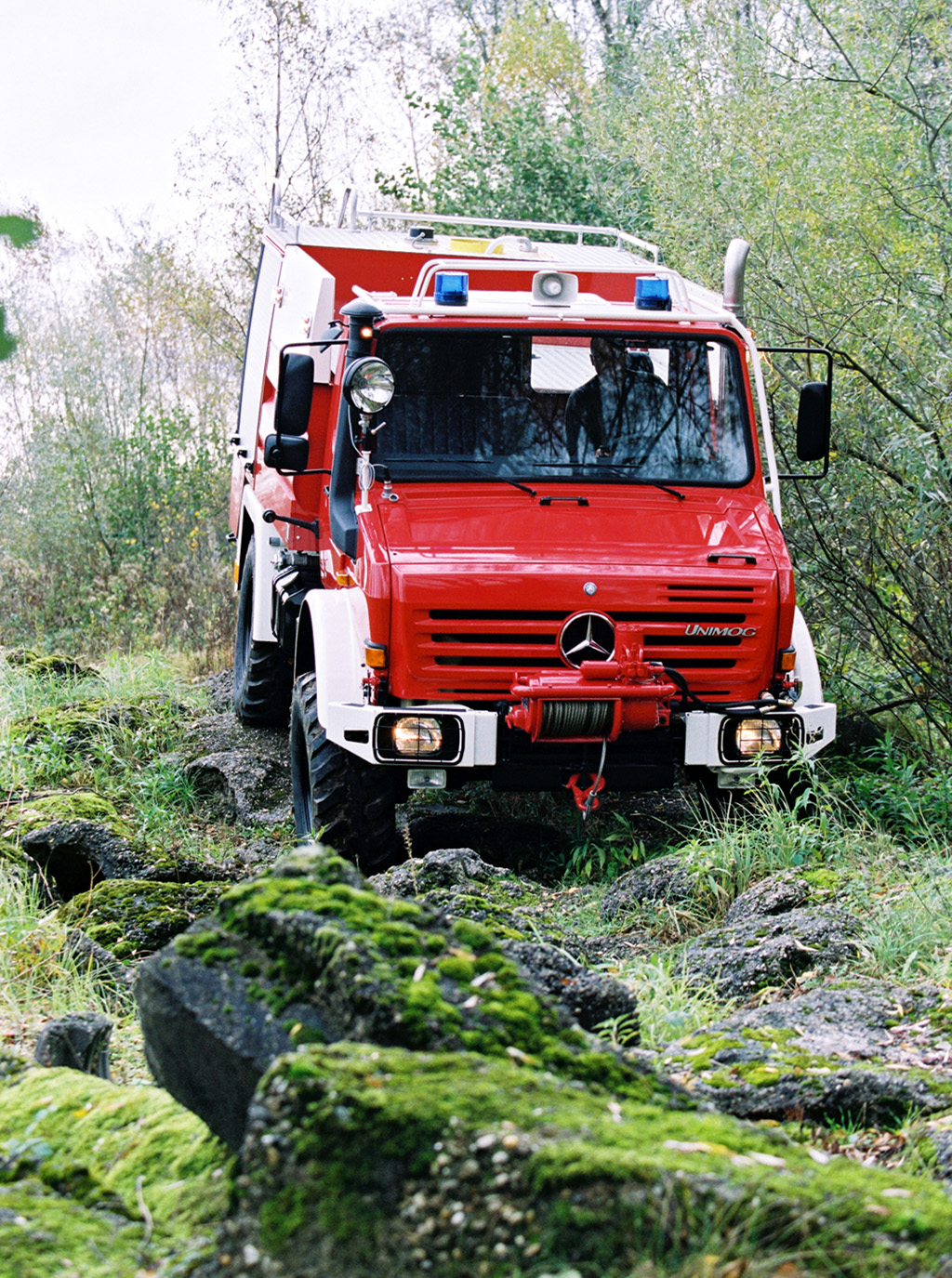 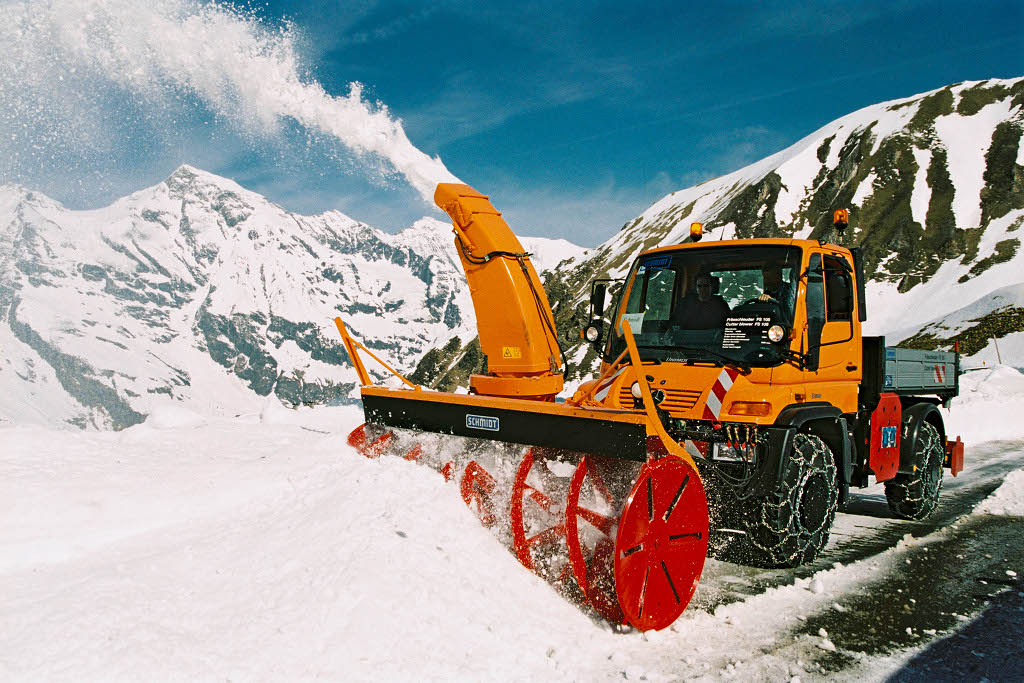 In 1992, Daimler blew some magic dust over the Unimog, releasing new light models (the 408 & 418). These were blessed by both engineers and designers: they features a new front cab that enabled better visibility with front mounted work equipment and used an automatic braking system, transmissions with up to 22 forward gears & 11 reverse gears,and new engines borrowed from Mercedes passenger cars. Despite its size, the new Unimog was like a ballet dancer who also enjoyed body building, as it had a minimum speed of 360 meters/hour (393 yards/hour) and fording depth without equipment of 80 cm (31.5 inch).

One year later, the Unimog range welcomed the U2450, which liked to show-off its three axles and 6x6 drive. 1994 saw the introduction of another bespoke Unimog as Mercedes-Benz released the Funmog, a model that came with leather seats, carpets and other luxury goodies. In 1996, the truck went microscopic, with the release of the UX100, which was engineered to squeeze swiftly in urban areas. 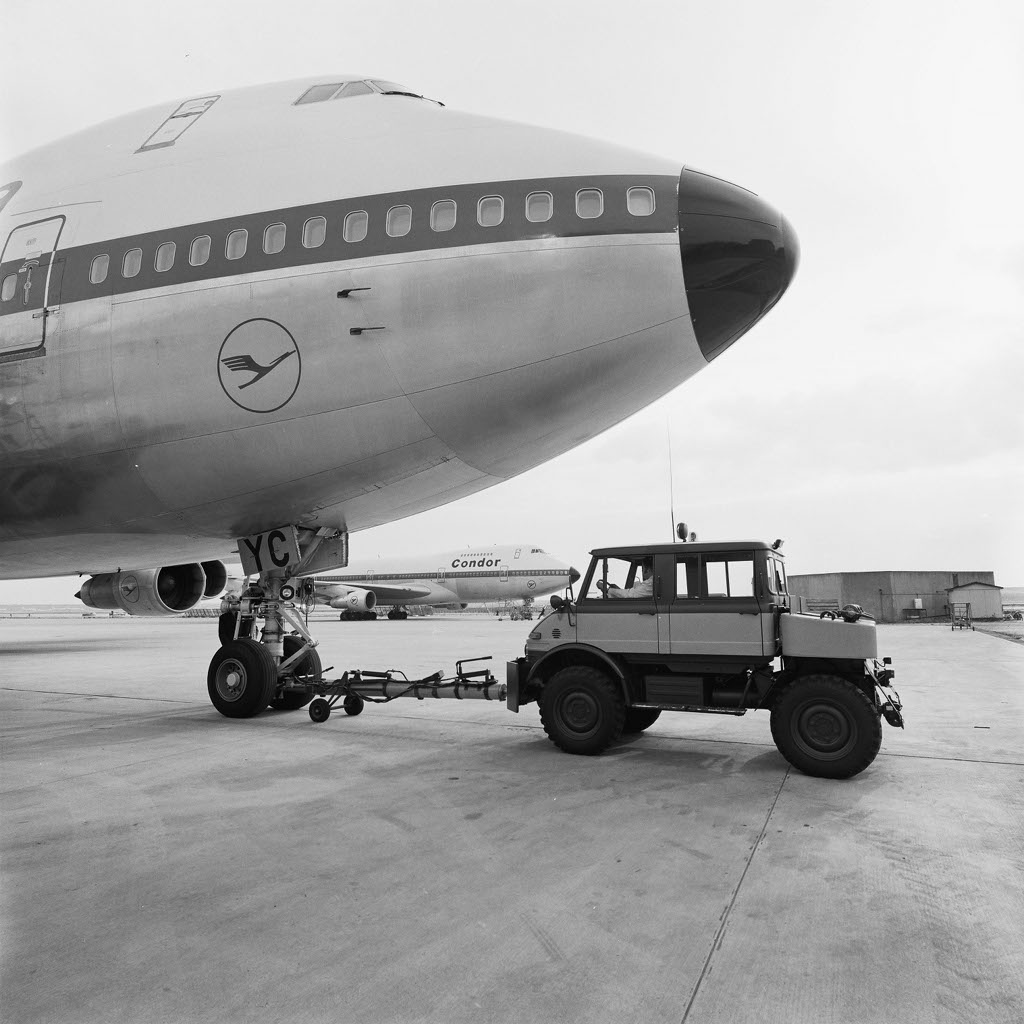 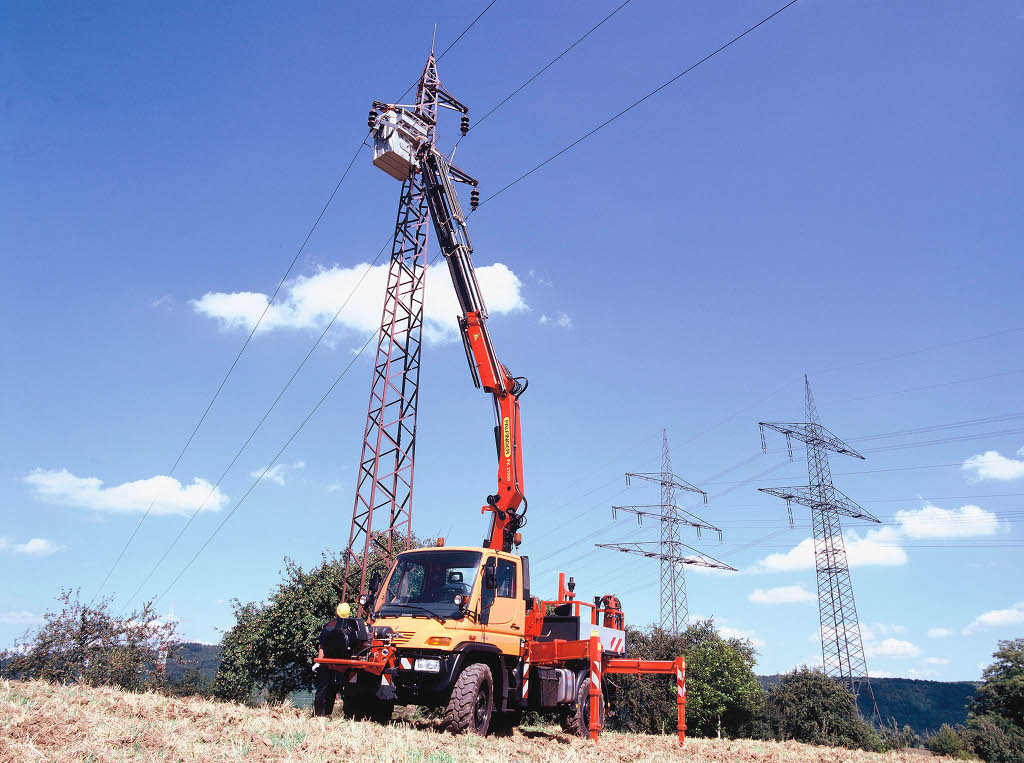 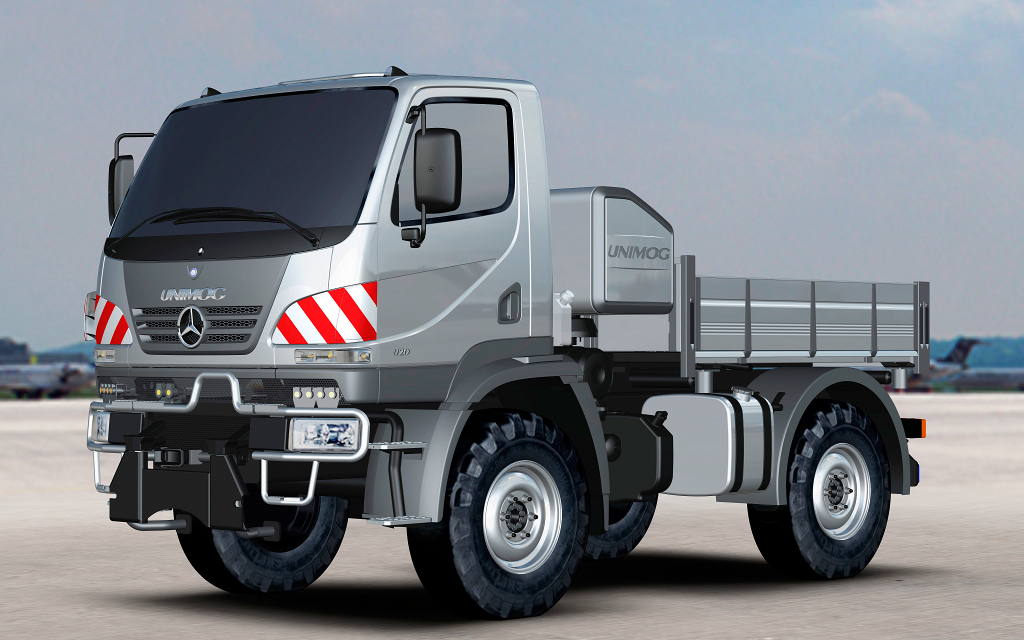 Germans like exact figures, so Daimler chose the year 2000 to bring a new range of Unimogs to the market: the UGN 405, U300, U400 and U500. In the years that followed, the Unimog received even more care, as its production was transferred to Worth an Rhein, the largest truck plant in Europe. In 2005, the light truck received another fancy version, as Mercedes-Benz introduced the U 500 Black Edition at the Dubai Motor show. We’re still waiting for a chrome or gold-plated version.

Subsequently, the Unimog started receiving beefier powerplants, culminating with the release of a new U500 Black Edition in 2007. This was developed by the Merc-specialized tuner Brabus. It was (over)powered by a straight six 6.4 diesel unit, developing 286 HP and 826 lb-ft of torque (1,120 Nm), which was mated to an automatic gearbox (this also offered a manual mode). This piece of automotive strength came with goodies like the S-Klasse’s COMAND system and DVD navigation. Let’s not forget the 4.3 tons payload capacity. But the Unimog range was no planet killer, as it featured Mercedes' BlueTec technology, which allowed it to meet Euro IV exhaust regulations.

In the course of the same year, Mercedes-Benz released the new Unimog U20 model, which was based on the 2000 U30 model and used the compact cab from the Accelo light truck. 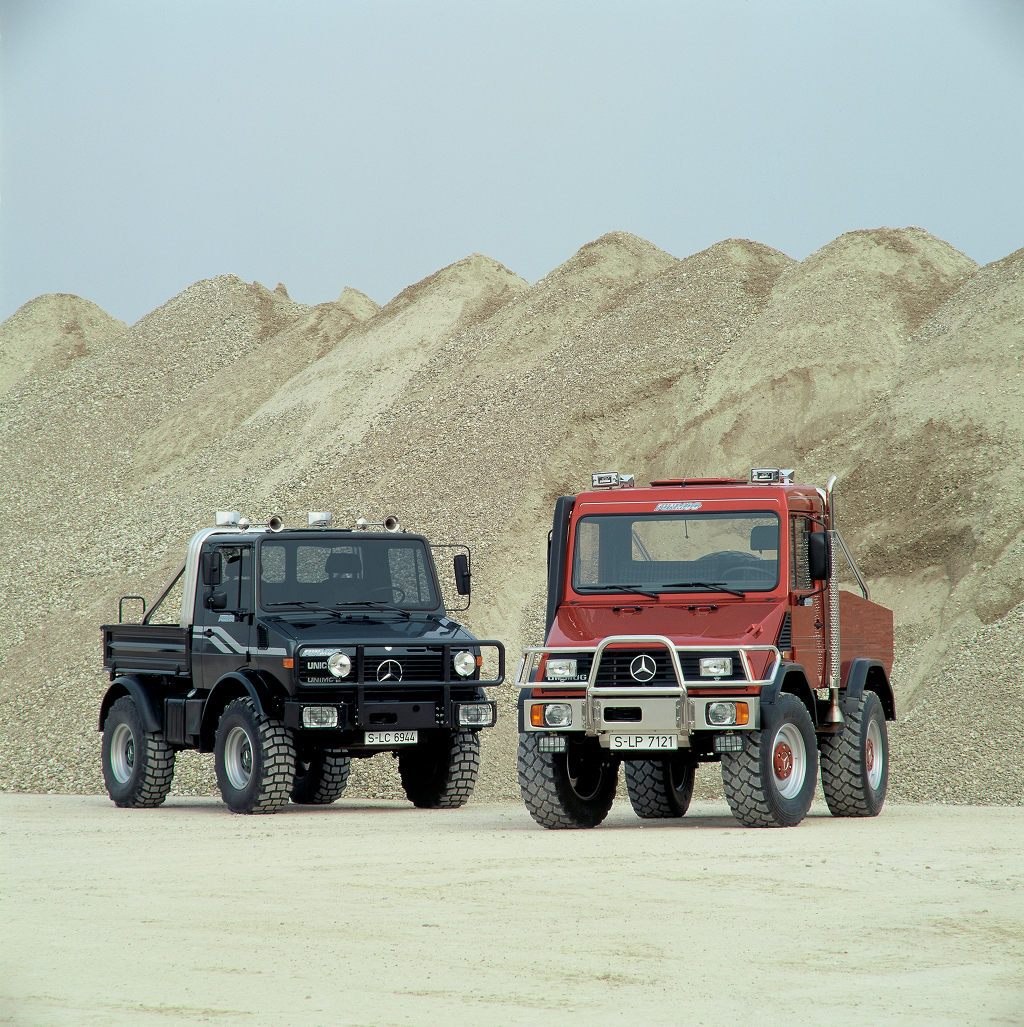 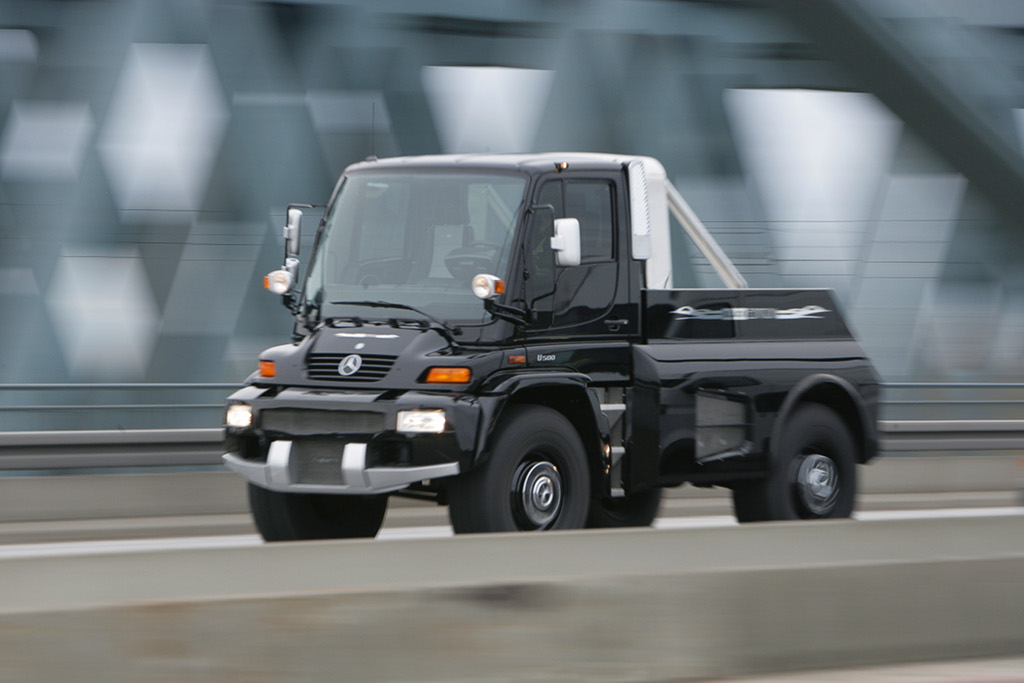 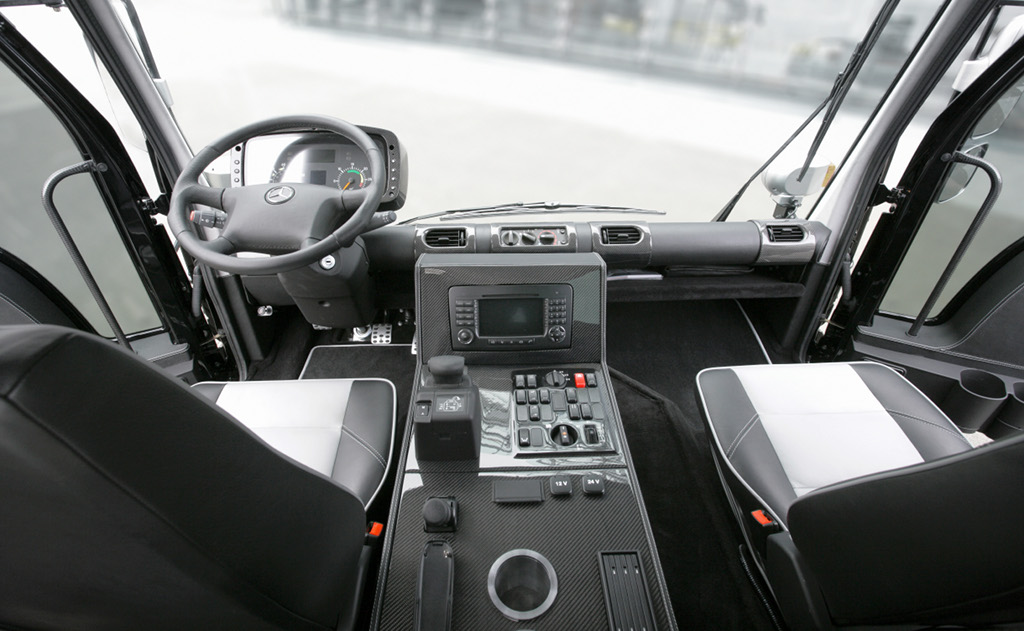 Over the years of its production, the Unimog proved to be a big... hearted vehicle, as it not only served an infinity of civilian and military needs, but also agreed to donate its platform to multiple armored vehicles, making its utilitarian incarnations proud.

And we’ve saved some of the most interesting hobbies of the Unimog for last: as any young boy, the light truck admired trains when he was little. When it reached maturity, it decided that it had to become one of them. Daimler just couldn’t refuse its son’s request, so it turned the truck into a road-railer, allowing it to serve as a carrier, maintenance and rescue vehicle.

The Unimog is also a sports performer, as it likes to enter off-road competitions, like the Dakar Rally and Truck Trials, proving that working shoes and trophies make an excellent mix.

- The Unimog is like a strong, skillful gardener that can do all the work for you. But watch out, he might hit on your wife!

- German engineers are good at playing with words

- You don’t need a sports car to impress anymore. Get a Unimog U500 Black Edition. You can use it to plough the snow before heading out to a business meeting.