Andrew Nabors
For those of us who value practicality and style, there is only one logical form of 4WD transportation. Because everything else is an imitation, we’ve compiled the finer points of these capable and comfortable SUVs
9 photos

The year was 1969, and GM was late to the game when it came to family fun. We have to give Ford the win, as the Bronco and Mustang were launched well ahead of the Blazer and Camaro. Something new appeared in the showroom, and it had fun written all over it. The K5 twins (Chevy Blazer and GMC Jimmy) had a decent run through three generations that came to an end in ‘96.

Hallmarks of the early trucks (1969-72) include a fully removable fiberglass top, bucket seats, and loads of amenities. Unlike the Bronco or the International Scout, a K5 offered three powered windows, power steering, power disc brakes, and Air Conditioning. A dry weight hovering around 3 tons (2,721 kg) seems like overkill these days, but it offered unmatched strength off-road along with smooth cruising on the street.

Before your search begins, realize that anything this fun and old will come with rust. While most parts interchange with GM trucks, the body masters at Key Parts have stepped up to offer replacement panels that are galvanized for long life. With your project acquired, your first fork in the road will be 2WD or 4WD. Yes, 2WD Blazers and Jimmys were marketed to handymen, florists, and other light-duty work. Appealing to female enthusiasts, the 2WD models are laden with luxury.

Going 2WD is easy thanks to coil spring conversions, and they have ample room for massive wheels when lowered. However, most K5s had some form of 4WD, with many being AWD long before Subaru and Audi caught on. My 1987 example was factory equipped with a New Process transfer case that could be shifted on the fly, however I would choose an Atlas case with divorced shifters for more fun.

Every example is powered by some flavor of the Chevrolet Small Block V8, and they are tuned for incredible torque. Rated at 210 horsepower, they offered over 400 lb-ft of torque (542 Nm), even on a bad day. To make the most use of that torque, the K5 was built with limited-slip differentials. Growing up on an island, Ford owners would regularly pay me to pull them off the beach when their open differentials started digging to China.

There is enough room under the hood for the indestructible Detroit Diesel, and the U.S. Army used thousands of them before the introduction of the Humvee. Swapping a late-model LS powertrain is easy because late-model GM automatics (4L65 onwards) can be easily adapted to the original transfer case. Speaking of transmissions, a 4-speed manual is very rare. Until 1982, the automatic was the 3 speed TH350. The 700R4 is a 4-speed automatic that was introduced in ‘83, but they can be unreliable. From ‘88 onwards, the 4L60 automatic arrived with hardened internals borrowed from the Corvette.

Now we can address the elephant in the room: suspension. Because GM has only changed their 4WD suspensions 5 times since WWII, anyone with a welder and YouTube can build a wild K5. Anything older than ‘94 has leaf springs at all corners, so I first went with a 6” (152mm) suspension lift to fit 35” x 12.50 tires. In order to fit the largest tires possible, I added more lift for a total of 254 mm while running a 37” tire (385-70-16).

This was all done on stock axles, with extended anti-roll bar links and dual shocks at all corners. Increasing the diameter by such a degree killed my power, so a set of 4.56 differential gears kept me below 2,500 rpm on the highway.

All good things must come to an end, and college was on the horizon. In the ultimate error in judgement, I sold it in 2001 for $8,000. Even rusted out examples sell for over $15,000 now, and they will only become more collectible as they age. Don’t take financial advice from me and stay with us for all your automotive content! 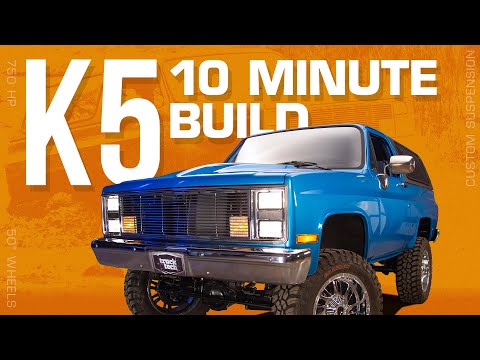