Home > News > U-turn
Sebastian Toma
A company from the UAE wants to solve the country’s drinking water issues in an eco-friendly way.
1 photo
The plan proposed by the National Advisor Bureau Limited is to tow an iceberg from Antarctica to the emirate of Fujairah. While the idea seems outlandish, computer simulations have estimated that it is possible, and that it will take a year to transport the average iceberg from its “home” to the Emirates.

According to Abdullah Mohammad Sulaiman Al Shehi, the managing director of the company that has come up with a plan, an iceberg contains over 20 billion gallons of water, which is enough for one million people to drink over a period of five years. Evidently, the figures are valid for the average iceberg, and the average water consumption of a person.

As Gulf News notes, the solution has other benefits, which include the potential to create micro-climates in the region. The fauna in the area could take advantage of the new elements in the water, but the full effects have not been documented.

By themselves, the icebergs would not melt fast enough, so they would have to be “mined” for fresh water. That process would work by chipping off blocks of ice, and then transforming them into a liquid with a crusher. The resulting water would be deemed safe to drink after being filtered in an appropriate plant.

Antarctica is the most southern continent in the world, and researchers estimate it contains about 70 percent of the globe’s fresh water supply.

Evidently, the company in the UAE does not want to take a massive chunk of ice from the continent, but it is unclear where they will have to request approval for the work.

Another possible benefit of the icebergs towed from Antarctica would be the potential of creating a tourist attraction in the UAE. In theory, the icebergs would not evaporate fast enough to make this plan unrealistic, because the average one has about 80% of its weight underwater, and the white ice reflects heat and sunlight in a reasonable proportion. 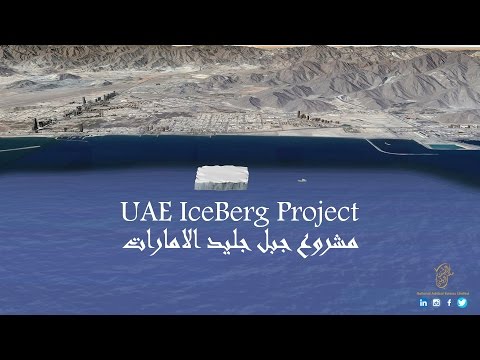