1 GhostBusters' Ectomobile Sold on eBay
Up Next

The Trotters’ Reliant Regal Van Up for Sale 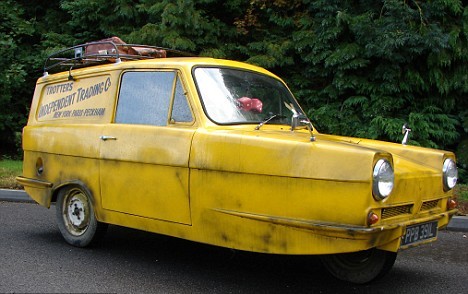 In case the name doesn’t ring a bell to you, the 1973 three-wheeler van is said to be one of the six models used during the filming of the aforementioned TV show, which means that you can now own a piece of television history.

According to sales manager Nigel Dean, the car ”looks very shabby, and it hasn't had a wash in a long time. The furry dice are still in the windscreen and it has a rusting roof with Del Boy's suitcase on top. Inside, the car needs a good vacuuming. It has a 700cc engine and you can get up to about 55mph before you endanger your life. But it's fully roadworthy with a current MOT certificate.”

The main car is currently on display at the Cars of the Stars exhibition at the National Motor Museum, alongside the Batmobile and the De Lorean from Back to the Future. Boxer Ricky Hatton, a fan of the show, recently purchased one of the original vans, while another of the vans used in the series was sold at auction in the UK for £44,000 ($72,710) in February 2007.

As well as the van, the buyer will have the rights to the www.delboysvan.com business, where the vehicle can be rented out for weddings and parties, the Daily Mail reported.