1 The Wohnwagon Is a Completely Self-Sufficient, Gorgeous Log Cabin on Wheels

3 Inside the Escape Vista, the Most Beautiful Tiny Home in the World

If you ever find some time to kill, scrolling under the #vanlife hashtag is bound to welcome you into a magical world of travelers and give you serious wanderlust. Not one entry there can hold a candle to the Castle R, though.

The Transforming Castle RV Is a Self-Sufficient, Truly Magical Motorhome

The reality of social media is that most of it is either completely fake or staged. Idyllic posts on the joys of downsizing and hitting the road in an RV, motorhome or even tiny house often hide a less idyllic reality. The Castle RV seems to be as magic as it gets.

Castle RV or Castle Truck is an older rig from New Zealand, which first caught the eye of the international media in 2014. It is also a homemade project from start to finish, which is perhaps the most impressive part about it, given its complex engineering and the ability to combine functionality with looks in equal measures.

You can see the video that started it all, courtesy of popular channel Living Big in a Tiny House, at the bottom of the page. As of the moment of press, it remains the only video tour of this amazing family home, which transforms into a castle at camp. Indeed, the name Castle RV is not by accident.

This is the work of Jola Siezen and Justin Hayward, with a Bedford truck as a basis. Jola is a Guinness record-holding acrobat who travels the country with her twin sister and their act Twisty Twinz, and Justin is an engineer who accompanies her on the road and works from wherever they might be. In 2014, when they opened the doors to their castle, they had a toddler, son Piko.

Justin came up with the idea for the RV as they were ending their international travels and returning to New Zealand. Having previously lived in a converted bus, they decided they wanted to continue with a nomadic lifestyle. They also knew they wanted a motorhome that was decidedly different from anything else, so Justin drew up the plans for a truck that could transform into a castle.

When traveling, the RV is a modified Bedford truck in keeping with road limitations for such vehicles. It’s described as “compact” in the video below, but that’s only in comparison to how it virtually explodes into a two-story residence with medieval styling. Otherwise, it’s clearly tall and heavy, but relatively easy to handle.

At camp, through a combination of automated hydraulics and manual work, everything about the Castle RV becomes bigger. The two turrets (clad in fake bricks) in the back roll outwards, the lounge expands sideways, and the cabover area and the “balcony” up top extend upwards. In total, living area is of 40 square meters (430.5 square feet) and it includes anything you could possibly need to live comfortably.

The “downstairs” is where you’ll find a full-size kitchen with full-size appliances and plenty of cooking space, a dining nook, and a lounge that opens up completely to the exterior. Also here is a stove that heats water and provides warmth. The materials used throughout were recycled from discarded items or demolition materials: for instance, the counter in the kitchen is made with wood from power poles, cut into pieces and repurposed.

The cabover area is the bedroom, with a hidden circular, rotating storage section underneath, big enough for most of the clothes of a family of three. The wallpaper here is made from old music books, with hidden messages that calm the mind and the spirit ahead of a restful night’s sleep. From the bedroom area, you move into the balcony, which includes a swing, a solar-heated bathtub, and even a secret oven to dehydrate fruit, tucked away into the roof. As Justin puts it, when there’s so much heat being generated, would it not be a shame to let it all go to waste?

The bathroom isn’t inside or adjoined to any of the living spaces, as you might have noticed. In fact, it’s divided in two separate rooms, situated in the rear turrets. One holds the compost toilet, designed in a yin and yang style, while the other is the shower room and wash room, with a tiny washing machine.

If all this isn’t enough to impress you, know that the Castle RV is entirely self-sufficient. It has solar panels on the roof with a battery pack, and rainwater collection system, and Justin says it can go off-grid indefinitely. He should know, because it was one of his goals when building it.

Speaking of building it, it took the two of them four years to complete the unique motorhome. In 2014, they were still adding stuff to it and improving it, so it’s safe to assume more modifications were made since, as well. Sadly, we couldn’t find any trace of it past 2015, which, ironically, confirms that this magical castle was, indeed, made to go off-grid. 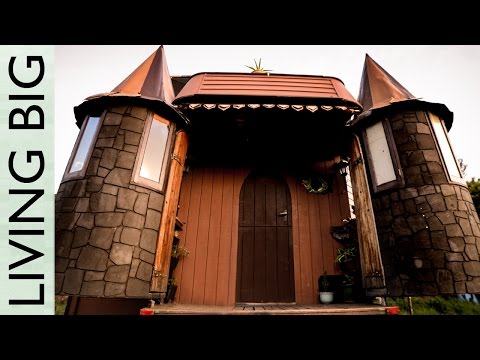