5 Remembering the FMC 2900R Motorhome, a True Luxury House on Wheels
Car video reviews:
Up Next

Bigger isn’t always better, they say. But when you’re living in a mobile home and you often feel like Alice after she ate the cake and banged her head against the ceiling, bigger isn’t just desirable. It is actually better.

The Transformer Rioja Trailer With Balcony, Jacuzzi and 3 Bedrooms Is the Ultimate RV

It gets no better than the so-called transformer RV, the “ultimate RV:” the two-story trailer from Spanish company Rioja Singular Vehicles.

Rioja has been building, customizing or converting special vehicles for more than 150 years, and its niche is found in the sport, competition and entertainment sector. Put it differently, Rioja Singular Vehicles makes trailers for big-crowd, multi-day events, whether they’re auto or moto GPs and races, music festivals, or studio film productions.

Their RVs are gigantic, with either one or two slide-outs, customizable layouts, off-grid capabilities, and a proprietary system that allows them to expand living space at the single press of a button. It’s something we’ve seen before, in Anderson Mobile Estates celebrity trailers, where a hydraulic system pushes up the roof to reveal an entire livable second floor.

In road mode, Rioja trailers are no higher than 4 meters (13.1 feet), which keeps them road legal in both EU and the U.S. While traveling, the second story isn’t usable, as the roof comes down to more than half the standing height. This means that everything that sticks out has to be laid down or removed, but the thought of getting so much space at camp in just minutes must make up for the bother. The company says the entire setup takes less than 10 minutes.

The particular unit presented in the videos below was first introduced in 2018 and, as of the summer of 2021, was available for rent in the UK. It is vast, standing at over 5.5 meters (18 feet) high and more than 30 meters (98.4 feet) long. It features one slide-out for the living room, but counts on incredible amenities even for a brick-and-mortar expensive house: it offers more than 80 square meters (861 square feet) of living space, a roofed terrace, a jacuzzi, and no less than three sizable bedrooms. And that’s just the proverbial cherry on the cake.

The ground level contains two bedrooms that sleep two each, situated at either end. There’s a lounge in the center with a comfy couch and dual large screens, and a fully-stocked kitchen with everything you could ever wish for, from cooking hob and fridge, to washing machine and plenty of storage. Sleeping arrangements in the bedrooms are in bunk beds, with the upper one lowering at the touch of a button – for those times when you only have one guest over. The bathroom here is beautiful but small: a rainfall shower, toilet, and sink with vanity, and room enough to move around without feeling cramped.

The master suite is upstairs, and has an attached lounge. The layout here is open-plan, which is ok if you’re traveling with family but could lead to some awkward moments if you’re in a larger group: there’s no door to the bathroom at one end, so just imagine having to go number two while a group of rowdy mates are watching the game on the TV at the other end.

That said, the furnishes are lavish. The bedroom separates the lounge from the bathroom, which includes a jacuzzi tub and an enclosed shower that could easily accommodate three people. Perhaps more impressive is the roofed terrace, which sits on top of the living room slide-out and is just perfect for watching whatever event you’re attending.

As one would expect with an RV of this size, everything is packed with tech, and expensive. You get CCTV and an intercom for security, large-screen TVs in every room, state-of-the-art audio system, AC and heating in every room. You also get granite counters and plush fabrics, flawless finishes, and the promise of a proper home on wheels.

“We take care of every detail,” Rioja Singular Vehicles says. “Every project is unique and in most cases this means we have to start from scratch, specifically designing the spaces and developing the drawings for all the installations, with the flexibility of a totally bespoke project.”

As Nick Burnham of MotaHolic says in the video below, in this case, the totally bespoke project is a true transformer, the ultimate RV, priced at well over $610,000. 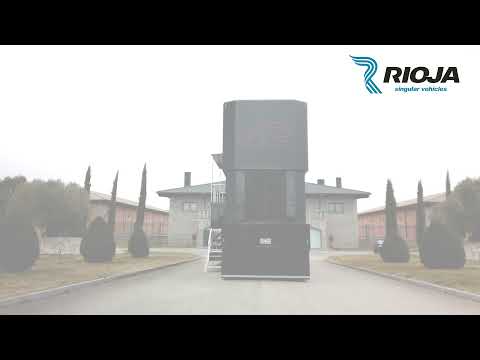 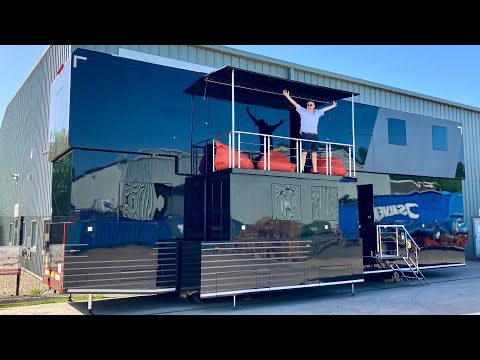