This odd looking mini-tank you see is the Tinger C500. Built to cover any terrain that standard vehicles can’t manage in, this track-driven vehicle is showing how far human ingenuity can go.

As even Tinger themselves call the C500, your very own personal ‘mini-tank’ can be owned by anyone with a D-Class license. That’s right folks, what you are looking at can be owned and operated even in your own backyard. Preferably in your own backyard as the tracks on this thing will destroy your neighbor’s lawn. And then it’s a fight of whose got the biggest tank.

But what makes someone create something like this? Well, necessity. The Russian backwoods are a treacherous place. Be it on foot, be it on horseback or elephants. Be it on the newest Land Rover around. Whatever you are riding, these lands do not yield easily. So eventually man popped up and said, “Hey, I need to get to grandma’s house.”

But grandma lives on the other side of the woods and over the marshlands, through the swamp and lake, where you’ll eventually come to a mountain. At the top of the mountain is grandma’s house, who's been flying solo since her birth in ’45. Afterall, she is Russian.

Honestly this Hulk of a machine can tackle all of the above-named terrains. If anywhere on your journey you encounter snow, don’t fear, the main function of the C500 is its ability to tackle snow. Thanks to its tank-like design and tracks, snow-and-ice covered terrain is not an issue. Coming in at nearly a ton, those tracks will even cut and grip asphalt.

Speaking of cutting and gripping, the C500 was made with agricultural work in mind too. With a load capacity of 1,100lbs (500Kg) and towing capacity of 1,763lbs (800Kg), I’m sure it’ll be able to be used to transport farming equipment, such as plowing tools and feed, but also strong enough to pull a plow behind it to get some work done. But a plow on the front of it will just as quickly transform it into a snow removal truck.

The entire design for this thing was built around the term ‘all-terrain.’ With that in mind, imagine your favorite ATV. Now, imagine that hill that’s been scaring you since you first saw it. Put yourself in front of that hill, on your ATV, and next to you, another version of yourself riding in one of these, but with three of you friends in the back, riding along as well. Looking at yourself, you rev your ATV and your C500. The ATV takes off and makes it to the top. Seconds later, you look behind and see your buddies hill-crawling with beers in hand, talking amongst themselves like this is all in the Saturday fun.

If when you first saw the Tinger you may have felt an amphibious vibe from it, is because it can be amphibious - to the point where you can cross that swamp to grandma’s house and even the lake. But beyond this, you can even stop in the middle of that lake and fish. Grandma's gonna have to wait.

As far as the track design goes, it looks like someone just took the top off a tank. If you haven’t realized it yet, tanks are designed that way for a reason. With that in mind, this vehicle can tackle a a climbing angle of 40’, a downhill angle of 45’ assisted by a massive 100’ angle ditch crossover angle. If needed, a 30’ degree slide-sloping angle is also possible with normal operations.

All of this is driven by a four-stroke engine that allows for eight hours of continuous operations. So what are you waiting for, look it up and see if you and the buddies would like one of these. 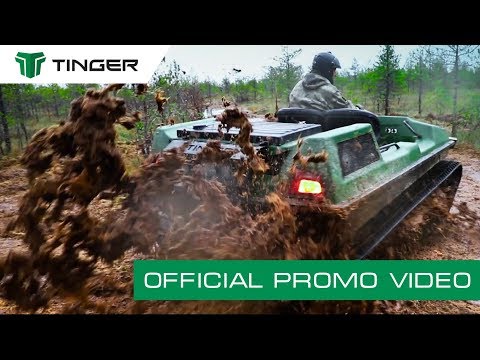