5 This 1952 Ford F-1 Custom Truck Drives Only Backwards, Is Confusing and Awesome
Car video reviews:
Up Next

“Ride it until the wheels fall off” takes on a very literal meaning when you do more than 60 mph (96.5 kph) in a jet-powered Amish buggy still riding on wooden wheels and chassis.

The very idea of an Amish buggy, the kind of vehicle that is usually pulled by one or two horses, strapped with a jet engine in the back shouldn’t exist. Yet, it does: it’s called the Thunder Buggy and it’s perhaps the coolest and most daredevil custom car vehicle ever built. It’s also quite possibly a death trap, but as its very creators are wont to say, at least it puts a smile on people’s faces.

The idea for Thunder Buggy came to creators Chad Clark and Mike Monter from Millersburg, Ohio, in 2017. To be fair, they didn’t think right off the bat about making this kind of custom buggy: they only wanted to build something that hadn’t been done before. They thought they could do a “turbine-powered four-wheel drive pulling truck,” as Chad explains in the video at the bottom of the page.

That night, Chad went home and started to look for an engine online. He thought he’d found it, so he ordered it, but when it arrived days later, he found out that the description for it was wrong: it wasn’t a turbo shaft engine, but a turbojet engine. This meant they had to ditch the idea for a truck and look instead for something lighter. They eventually settled on an Amish buggy since Holmes County is home to the biggest Amish community in the world.
“It’s like oil and water, they should not go together,” Chad says, laughing. He’s not wrong, either.

In order for the buggy to support the weight of the engine and the wiring and everything else, the pair built an enforced sub-frame for the buggy and added airbag suspension. Other than these two mods, they didn’t do anything else to the “chassis,” other than to restore it with an eye to keeping it as close to original as possible.

For all intents and purposes, this is still a wooden carriage, so it’s as reliable, fast and solid as one. Which brings us to the same idea that maybe putting a jet engine on it is not the smartest thing around.

Inside, there are plenty of aircraft and automotive gauges, and a lever that shuts off the engine in case something bad happens. Completing the project took over 11 months and 800 man-hours and, according to a Bargain Hunter 2019 piece, a lot of head-scratching as the duo had to improvise as the build progressed.

After this much work and some $35,000 in total, the Thunder Buggy was complete and ready to hit the road, with appearances at various car and air shows around Ohio. Chad is the de facto owner and he says he didn’t even think of investing in advertising for the buggy because, well, it does a pretty good job at advertising itself. Word about a jet-powered Amish buggy travels fast and people are curious to see it with their own eyes, so business has been good and steady.

As for the name, it’s a perfect fit. The Thunder Buggy sounds “exactly like a jet passing by,” making a sound of about 125 decibels without the afterburner. This would be equivalent of a very loud rock concert or an airplane taking off, and experts say anything that goes beyond 125 nears painful territory. With the afterburner, this buggy gets even louder, at about 180 decibels – a sound comparable to that of a rocket being launched in space.

It’s just the sound that can draw this kind of comparison: this buggy was never built for speed. With the jet engine blasting, the Thunder Buggy reaches speeds of 60 mph (96.5 kph) and could probably go faster if Chad, who is also the driver, held no appreciation for his life.

At this speed, the wooden wheels start to shake, so pushing it faster would probably result in tragedy. Because the pair wanted to maintain the original look, they never installed a roll cage or any other safety features other than a seatbelt, so this is still a wooden carriage traveling at speeds higher than it should. A seatbelt can do only this much when the very thing you’re riding in shatters into a gazillion pieces.

“The worst thing that can happen is that I have a fuel leak and the engine runs away, or a wheel explodes going down the track – that would be a bad day,” Chad says of a worst-case scenario situation. “Bad day” feels like a major understatement.

The fact that this is a speeding, wooden deathtrap aside, the Thunder Buggy is an impressive piece of engineering and custom work. As of the time of writing, it is available for rent and still booked to make appearances at car events and local fairs. 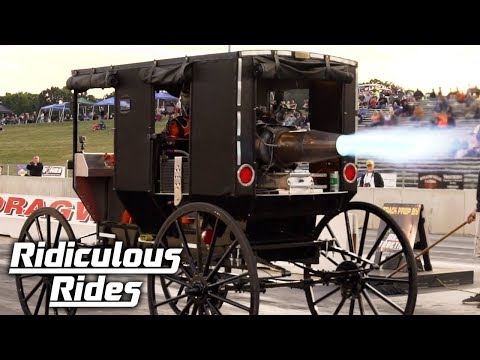