Relatively cheap, practical, and fuel-efficient, the Divan was an innovative three-wheeler that was supposed to revolutionize automotive design.

In the second half of the 1940s, the automotive industry was going back to manufacturing passenger cars after contributing to the war effort for six dreadful years. This period of revival offered plenty of opportunities for both existing carmakers and newcomers who had something new to offer.

In Europe, an ambitious young man by the name of Enzo Ferrari was laying the foundation for one of the most famous sports car brands in automotive history. Across the Atlantic, a visionary entrepreneur called Preston Tucker also founded his own car company with the aim of ending Detroit’s hegemony on the market. Within a year, the Tucker 48 "Torpedo" hit the streets, and although a huge scandal followed by a lawsuit ended any hopes of a large-scale production run, the fascinating car would go down as one of the most innovative sedans of all time.

Like Preston Tucker, Glen Gordon "Gary" Davis, a former Indiana-based used car salesman, moved to California hoping to kickstart his own automotive company. He made the first step towards this goal in 1947 by purchasing a custom vehicle from a well-known Southern California socialite called Joel Thorne, who happened to be the heir to the Chase bank empire.

Dubbed “The Californian,” the three-wheeled roadster was built by future Indianapolis 500 racing car designer Frank Kurtis who took inspiration from the Lockheed P-38 Lightning fighter plane. Apart from its unusual aircraft-like design, it was allegedly pretty fast, with Thorne often entering it in amateur racing events before deciding to sell it.

When he first saw the futuristic car and noticed how people reacted to it, Davis realized that such a design would sell like hotcakes, so he brought The Californian with the aim of reverse engineering it. The circumstances behind the sale remain unclear, but legend has it that the former salesman devised a plan to crash the car during the test drive and have Thorne sell it to him for a huge discount. Apparently, this plan worked, and he ended up buying the three-wheeler for no more than $50.

Soon after, Davis hired several engineers, including Peter Westburg from Douglas Aircraft Company, and after dismantling the vehicle and figuring out how it was built, they went ahead and created a 1:4 scale model out of clay.

Once the model was completed, Davis took some photos and put up an ad in an issue of Hollywood Citizen News, claiming that he was building “The Car of the Future.” With a projected sticker price of less than $1,000 ($13,287 today), unparalleled fuel economy, and an innovative three-wheel design that made it easier to parallel park than any other vehicle available on the market, the car instantly drew a lot of interest.

The businessman managed to secure an investment from the Bendix family, and within a couple of months, he founded the Davis Motorcar Company, rented a hangar at the Van Nuys airport, and hired a team of workers that began building the car.

Christened Divan, which is the Arabic term for a couch or day bed, the three-wheeler featured two doors and a large bench seat that was capable of accommodating up to four adults.

Measuring 183.5 inches (466 cm) in length and no less than 72 inches (183 cm) wide, the Divan was huge for a three-wheeled vehicle, yet it was considered compact when compared to the era’s "hugongous" sedans.

Built around a steel chassis covered with streamlined aluminum panels, it looked like a small aircraft that lost its wings. In terms of innovations, it boasted a removable fiberglass hardtop, hide-away headlights, disc brakes for all three wheels, and built-in hydraulic jacks that made swapping a flat tire extremely convenient.

The company went on to develop two prototypes which were used to boost public interest even further, but before selling any cars, Davis managed to raise an estimated $1.2 million ($15,944,986 today) by selling dealership rights across the U.S.

The actual production run progressed at a snail’s pace, much to the dissatisfaction of both the founder and the group of anxious investors. After two years of setbacks and missed deadlines, potential dealers sued Davis for breach of contract. To make matters worse, the company’s employees followed suit a couple of months later, and by the summer of 1949, an investigation was launched by Los Angeles County District Attorney. Gary Davis was eventually convicted on 20 counts of fraud and eight counts of grand theft. He was then sentenced to two years at a labor camp in Castaic, California, while “The car of the Future” suddenly had no future at all.

Including the prototypes, 16 Divans were completed between 1947 and 1949, including three military vehicles. They were given to creditors, and 12 of them have survived to this day. One can be admired at the Petersen Automotive Museum in Los Angeles, California, and you can learn more about it in the Jay Leno’s Garage episode posted below.

Although it was never sold to the public, the Davis Divan remains an intriguing piece of post-war automotive history. It was a futuristic, aircraft-inspired, three-wheeler that was fundamentally different from the era’s mass-produced cars. 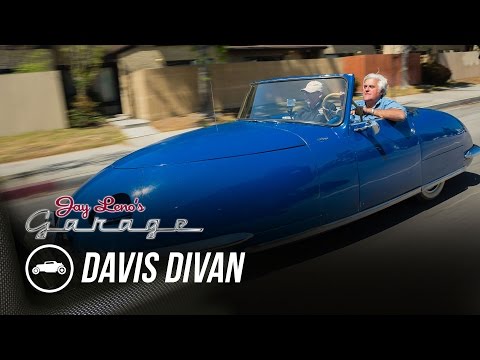