5 All Aboard Mariah Carey’s Christmas-Themed 2020 Prevost RV
Car video reviews:
Up Next

Stellantis Revealed All Platforms It Will Use For Its Electrification Plans

The Terra Wind Amphibious Motorhome Is Most Luxurious, Crazy Way to Vacation

That was the idea, almost two decades ago, behind one of the wackiest, awesome yet still incredibly luxurious motorhomes ever created. Meet the Terra Wind, part luxury RV, part yacht slash boathouse, and the perfect vacation vehicle wherever you may go. (As long as it’s not near saltwater.)

The Terra Wind is the brainchild of inventor of amphibious vehicles John Giljam and his wife Julie, founders of the company Cool Amphibious Manufacturers International (CAMI). Based out in Bluffton, South Carolina, the duo started off by offering ski jet rides and tours on the river, so John got the idea to build a vehicle that would carry tourists both on land and on water.

They first created the Hydra Terra, with a 49-passenger capacity and, in 2002, started working on what would become, two years later, the Terra Wind. The Terra Wind has a bus variant, but the one we’re going to talk about today is the luxury RV. After all, since you’ve got $1 million to spare, you might as well get the best there is.

And Terra Wind is just that. The idea behind it was to create a vehicle that would allow you to drive on the road and sail on any body of freshwater, as long as the weather permits. Another focus was to offer a motorhome of the kind that, back then, you couldn’t find that easily, so the Terra Wind has no plastic and no cheap materials inside. In fact, the interior is exactly what you’d get with a yacht, all marble tile floors and granite countertops, teak cabinetry and real leather on the furniture, and a legit jacuzzi in the bathroom.

That is, of course, the highest price option on this strange RV. The basic starts at $850,000, and the luxury trims are included in the $1.2 million variant. For this kind of money, though, you get a very stable and relatively easy to operate (especially given its size) vacation vehicle.

Power comes from a Caterpillar 3126E turbocharged 330-hp diesel engine with a power takeoff unit: you have automatic transmission for driving and a marine gearbox for operating it on water, getting the propellers in motion. Switching between land and marine operation is a matter of putting one in neutral and the other in drive, though you also have to get out and inflate the 13-foot (3.9-meter) pontoons that enhance stability on water. The initial model didn’t have those, but you weren’t able to open the slide-outs either.

The Terra Wind is just as stable and competent on water as it is on land, though it makes for a far more striking appearance when it’s floating. It’s built with a very low center of gravity so that there is no risk of toppling it over. With the addition of the pontoons, it is supposed to handle 4-foot (1.2-meter) waves and winds of up to 40 mph (64.3 kph) like a pro, though neither John nor Julie recommends taking it out on a storm.

On water, the RV moves slowly, at a speed of about 4 knots. On land, it’s faster and maxes out at 80 mph (129 kph). The exterior is waterproof (a patented design), but there are emergency pumps in case of flooding. The instrument panel is a tad more complicated than with a standard motorhome, but only because you have one for marine mode, as well. However, as you can see in the video below, John made sure that use of the instruments is intuitive.

The interior is comfortable, family-friendly and luxurious: Julie handled this part, and she made it a point of turning this into an actual mobile family home. You have a complete kitchen with only residential-style appliances and a dining room that doubles as entertainment room, thanks to state-of-the-art audio system with large screen TV. The nook where the table is located slides out for even more space.

In the middle of the RV is the bathroom, with an electronic toilet and a bathtub-jacuzzi combination. Shame on all the other RVs with just an overhead shower, this amphibious motorhome even offers a view with the jacuzzi.

The master bedroom is at the rear, with a queen-size bed with custom mattress, mirrored ceiling and the second slide-out. Through here, you have direct access to the porch that doubles as a swim platform when out on the water. The platform has been upgraded since the launch and is now extendable. It is actually a real swim platform, to which you can attach a couple of jet skis.

Sometime after launch, the plan was to create a trailer for the RV that could also float. On CAMI’s website, there is no trace of it, so it’s likely they were never followed through. Still, even without a matching floating trailer, this motorhome is impressive for all it offers and does. Very expensive, but impressive nonetheless. 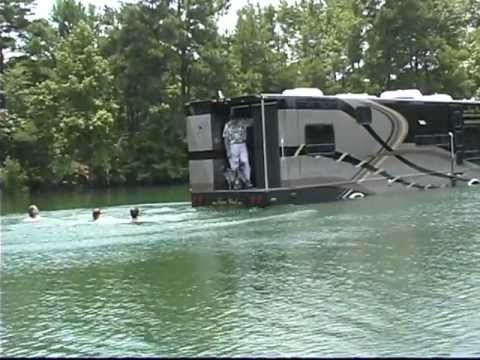 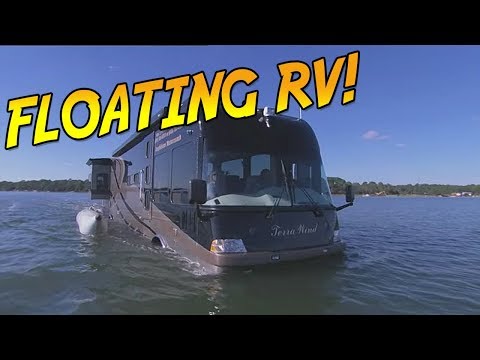