3 The Evolution of the Street Legal 911 GT1, the Most Outrageous Porsche of the ’90s

4 Koenig C62: An Insanely Rare Street-Legal Supercar Based on a Legendary Porsche

5 The Story of the Dauer 962 LM, a Le Mans-Winning Porsche Unleashed on Public Roads
Car video reviews:
Up Next

Rolls-Royce Cullinan Black Badge by Mansory Is Awesome, Save for One Ridiculous Detail

Known all across the globe for its extremely reliable yet mundane-looking vehicles, the Japanese manufacturer once built a street-legal homologation special that continues to blow people’s minds 24 years after it was introduced.

In 1994, following the downfall of the FIA World Sportscar Championship, the BPR Global GT series was founded by Jürgen Barth, Patrick Peter, and Stephane Rate. For the next couple of years, it brought back top-level endurance racing to the motorsport world and introduced the iconic GT1 class for heavily modified versions of road-legal supercars. This category, where the McLaren F1 thrived, was also included in the 24 Hours of Le Mans.

Following the success of the BPR, FIA took the reins of the competition in 1997, renaming it, and the GT1 morphed into a class for purposely-build racing machines. However, some connections to the road cars remained, as homologation rules required manufacturers to build street-legal counterparts of the racing machines. This new set of regulations gave birth to epic cars like the Mercedes CLK GTR or the Porsche 911 GT1.

Since the early days of the GT1, Toyota was involved in both the BPR and Le Mans. It competed with the Supra GT-LM but without much success, so, for the 1998 edition of Le Mans, the company wanted to introduce a brand-new contender.

Developed by TTE (Toyota Team Europe, the current Gazoo Racing) in Cologne, Germany, this new racer was codenamed TS020 and received the official GT-One moniker. Purposely built for the Circuit de la Sarthe in France, it needed at least a road-going sibling to earn homologation.

In several months, TTE managed to design, build, and test the race and road-worthy cars. Out of the three GT-Ones that were sent to France for the 1998 race, only one managed to finish, and it did so in ninth place. Even though the race program didn’t live up to expectations, it gave birth to what is still the most outrageous road car that Toyota has ever built.

Built on the very same Dallara-developed carbon fiber and aluminum honeycomb monocoque as its Le Mans-spec siblings, the GT-One road car employed independent, pushrod-actuated, double-wishbones on all four corners. The only difference was a slightly different shock absorber adjustment that improved ground clearance.

Its carbon fiber body was also identical to that of the race version. Painted red, it was equipped with side turn signals and different taillights, whereas the rear wing was lowered, but other than that, every element of the Le Mans cars was retained.

Another important component that was retained was the engine, which was mounted mid-ship behind the cockpit. Matted to a TTE six-speed sequential manual, the heart of the GT-One was a 3.6-liter, twin-turbo V8 that could easily make 600 hp and 479 lb-ft (650 Nm) of torque. That meant a 0 to 60 mph (97 kph) acceleration time of around 3 seconds and a top speed that exceeded 230 mph (370 kph).

One area of the road car that differed from the racer was the interior. A combination of bespoke elements combined with various parts from series-production Toyota models, it featured two leather-upholstered bucket seats, a center console with normal air conditioning vents, and a normal steering wheel. The latter’s position remained on the right-hand side, just like the shifter which was crammed under the right A-pillar.

To gain homologation, the rulebook stated that the street cars had to come with a luggage compartment big enough to accommodate at least a standard-size suitcase, but it didn’t get into specifics. Mercedes-Benz was the first manufacturer to exploit this superficially written rule with the CLK GTR  by making a hole into an unused area underneath a rear panel and designating it as a trunk. However, Toyota took it five steps further by somehow convincing the officials that the GT-One’s empty fuel tank could theoretically double as a trunk when empty since it was big enough for a suitcase.

Toyota ended up building two road cars and kept them both. One currently resides in the Gazoo Racing Europe Museum in Cologne, Germany, while the other can also be admired in a museum back home in Japan.

For the 1999 season, the GT1 rules were changed again. This time, all road car requirements were dropped, giving manufacturers a free pass to concentrate on all things racing. The GT-One was improved, and three cars returned to Le Mans. Like the previous year, only one of them managed to withstand for 24 hours, but this time it finished the race second.

Arguably a more spectacular road car than the CLK GTR or 911 GT1 in terms of looks, the GT-One remains the most outrageous and most fascinating street-legal Toyota of all time.

If you want to know more about the history of this incredible machine, we recommend watching the YouTube video below by Alfa Guy 2. 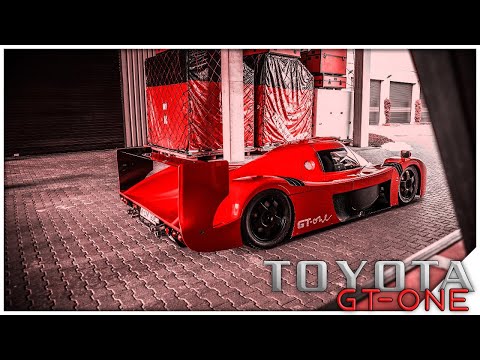