1 Sticker Bomb and the Geeky Art of Cartoon Car Wrapping

2 The Donk: Putting Huge Wheels on a Car

5 Street Racing - Tuned Cars and Adrenaline, Police Lights and Death
Up Next

Gabriel Brindusescu
Custom vehicles exist almost from the beginning of the auto industry as some of the first cars ever sold were just rolling chassis you could take to a coach builder and have your unique body panelling attached to it. But along with the expansion of this industry branch, more and more aftermarket parts producers have appeared on the market to offer different accessories for your ride... some are good but most are simply idiotic.
1 photo
I understand some people want their car to look different from the same model his/her neighbor has in the driveway, but this doesn’t mean you need to end up with a kitsch-mobile. As a rule of thumb, if a car accessory you see in a shop is cheap and made out of plastic, turn away and leave it on the shelf. I guarantee, your ride will look better without it.

However, price, material or finish are not the only factors that will tell people you’re a douchebag, so let’s take a look at the most idiotic car accessories people used or still use. Oh, before starting the list, I will not include Japanese customizations... they have a very different culture there and some of their tunings are so screwed up in our eyes, it’s not even worthy to enter that discussion. 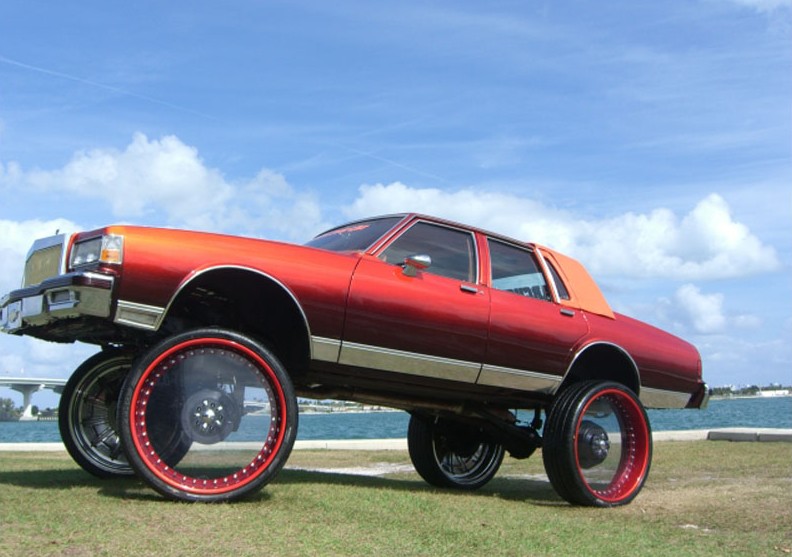 We’ll start with this because it’s very widespread now. Seriously, whoever invented this trend must have been teleported from the 1800’s because mounting 23-inch shiny rims wrapped in skinny rubbers will transform a normal car into a motorized wagon. It looks horrible and the car will also loose pretty much all its ride comfort, braking and handling performance.

Thankfully, fitting cars (SUVs mostly) with spinner wheels is almost extinct now, but that’s because the trend above has replaced it. It’s basically the same thing, but here a second set of spokes on the wheel will continue to spin even when you stop the car. This happens because the second set of spokes is mounted on bearings in the center cap. Despite having all the aforementioned riding disadvantages, spinners will also make your car look like a huge wind farm.

Even worse here are those plastic hub caps with chrome plastic spinners that appeared on the market at some point... 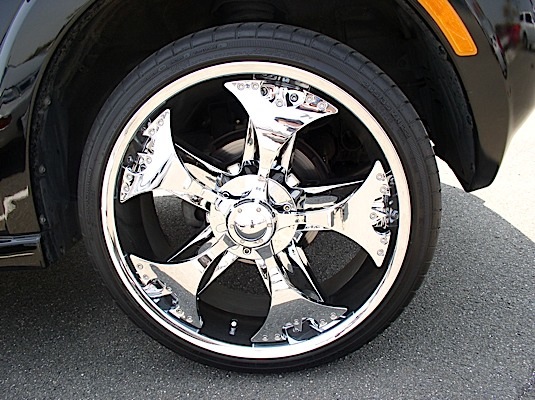 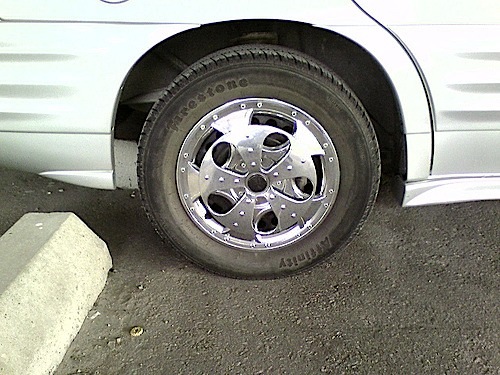 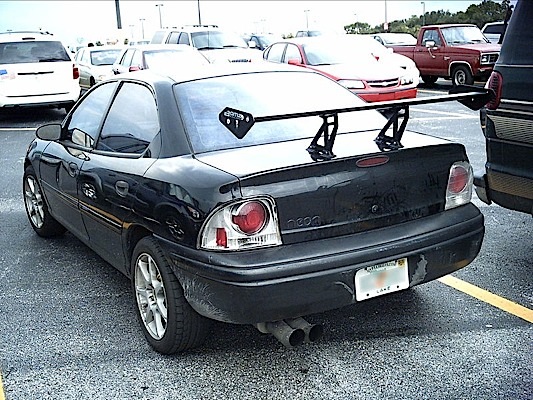 If your car didn’t came out with a stock rear wing or trunk spoiler, this is because the engineers that made it did extensive wind-tunnel testing and decided the car will work perfectly without one. And don’t even tell me you upgraded your engine for more horsepower and thus you need more rear downforce because of increased speed. Oh please, you won’t drive that pile of junk on a racing circuit. The most you’ll to will be to swerve around lanes on the highway, pissing people off.

So, if your car is a sedan and has a wing at the back, you’ll only tell people you have no mechanical knowledge and pose as a looser.

Sweet baby Jesus, this must be the most annoying thing ever. Why in the name of all legendary racing drivers do you want to sound like a bee hive hit with a club when most SUVs can easily overtake you. Want to go racing? OK, if your engine needs a derestricted exhaust and makes over 200 hp then you’re excused. But if you drive around the city in a 1.6-liter that sounds like a tin can or a busted trumpet, please go funk yourself.

This is also why I want to shoot down every one that takes out the muffler out of a two-stroke scooter. That amount of noise and the scooter barely dragging itself at 25 mph while leaving a trail of blue smoke is the definition of inefficiency. Why the hell does two-stroke engines are still used on scooters when everyone else talks about fuel consumption, CO2 emissions and overall efficiency anyway? 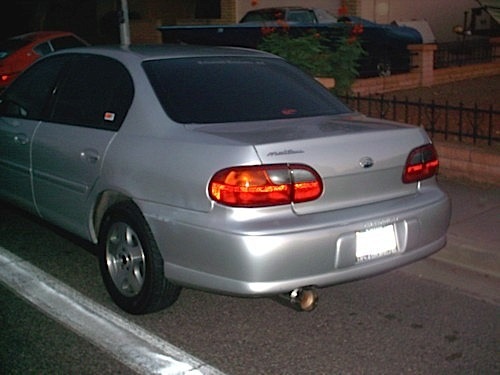 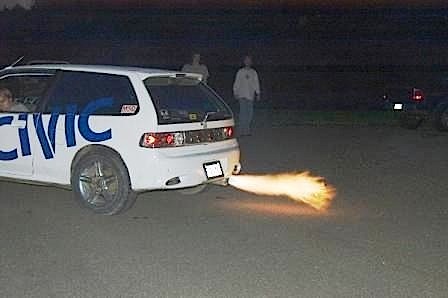 Same thing goes for those that fit an exhaust flame thrower, which is simply some sort of injector mounted in the exhaust dumping fuel in it and resulting in bright flames at the back. It’s normal that a performance track car will spit flames at the back from time to time due to the engine’s power and exhaust configuration, but to mimmic that by dumping fuel in the exhaust of your Civic is like a penis extender.

A typical no-money looser that will derestrict the exhaust out of a weak 4-pot will probably be the same guy that will mount a fake blow-off valve to imitate that ‘pfhssshssshs’ sound a turbocharged car makes when changing gears. It’s useless to describe you how stupid a car that barely accelerates look like if it sounds like bees and hisses from time to time. 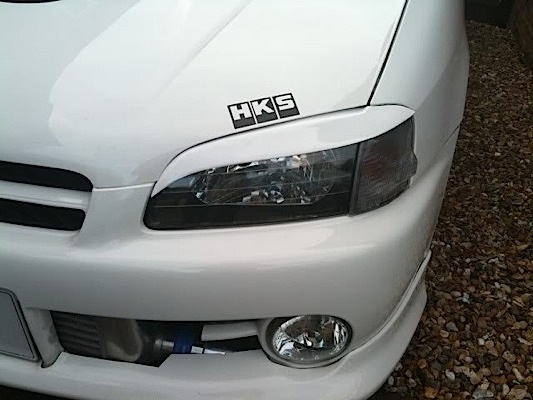 OK, if you want to spoil your car’s front end design, go ahead, put eyelids on the headlamps. Those designers that worked for months to create the headlight casings sure had no idea what they were doing. Not to mention that some of the aftermarket eyelids will allow for less light to pass.

And I’m not referring only to ///M, AMG, GTI or TypeR badges glued on cars that are no where near what those badges mean, but also to manufacturer stickers randomly put on doors or bumpers. If you don’t have a racecar, thus having to show off your sponsors or what performance parts you fitted your car with, it’s absolutely pointless to put stickers from sparco, APEXi, HKS, NX, Bilstein, Eibach or whatever other performance parts manufacturer on a stock car with an ugly body kit and a punctured muffler to sound ‘cool’. 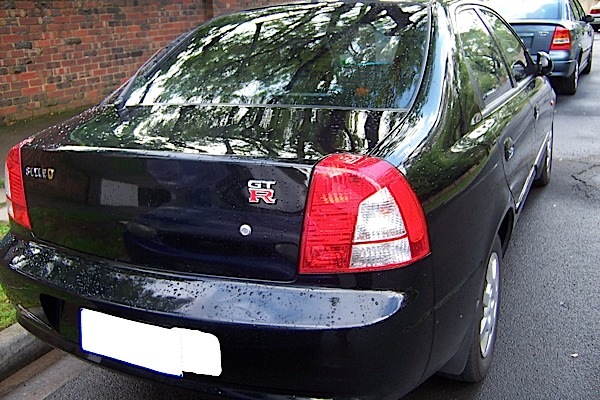 I don’t even know how this trend went on among ‘ricers’. Sticking a performance badge on a low end car won’t fool anyone into thinking your ride is cool. If it was to attract women, well most of them have no idea what those badges refer to, while most car guys will tell immediately that it’s fake. 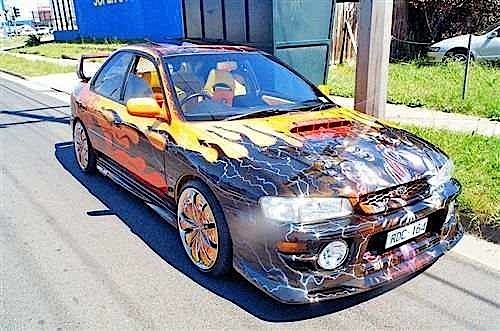 Unless you are sticking them on a hot rod, dragster or an oldschool bike, please don’t bother. In some cases, mixing classic motifs with new stuff won’t end up good and this is a perfect example. I can only blame Need For Speed Underground for making this popular. Japanese cars with hideous bulky aftermarket bumpers, side skirts, stickers and classic flames motifs on the sides. I’m already feeling nauseous, so let’s skip on...


PINK PAINT, HELLO KITTY, HEADLIGHT EYELASHES or other prettinesses (as a girl)

OK, let me tell you how this works. Men invented cars, men love cars, men repair cars, men get dirty for cars, men spend a lot of money on cars. So it’s pretty obvious that cars (along with other mechanical things) are men’s territory. We allowed women to drive cars because we think it’s hot to see delicate beings like them to wield large, oily and loud machines. That’s how nature works probably - every girl has a hotness-o-meter in our eyes and the more classic or sportier her car is, the higher her hotness-o-meter gets. 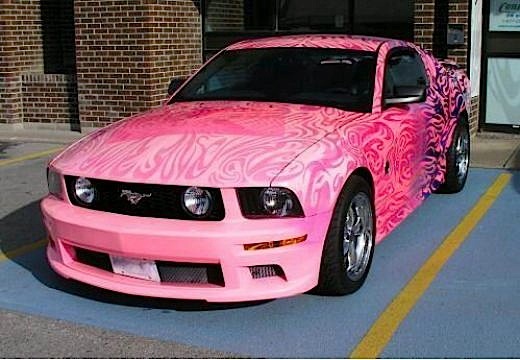 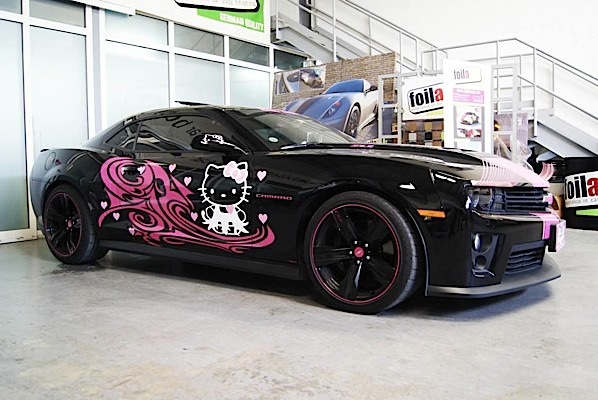 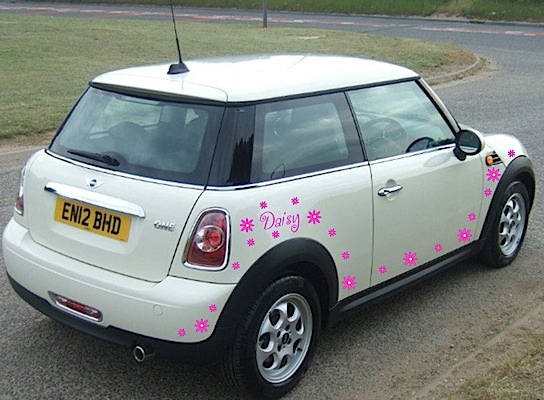 Now, if you paint your car in pink, fit it with eyelashes, Hello Kitty, flowers or any other cute stuff, you are simply mocking our manhood. It’s like forcing Clint Eastwood to wear a pink tutu and have some imaginary tea with the dolls.

We didn’t made your hairdryer, lipstick or purse look like industrial items, so please don’t make our cars look ridiculous.

PINK PAINT, HELLO KITTY, HEADLIGHT EYELASHES or other prettinesses (as a boy)

Please keep you fetishes or sexual orientation to yourself. We, straight males are not sticking vaginas over our cars to show what we like so neither you should.

The only acceptable ones were those made out of perforated leather and held in place by wires on thin classic car steering wheels. But those were created because some people found the thin steering wheels of the day not too grippy (I should remind you that those car may have not been fitted with power steering, so it was crucial you could have a good grip on the steering wheel). 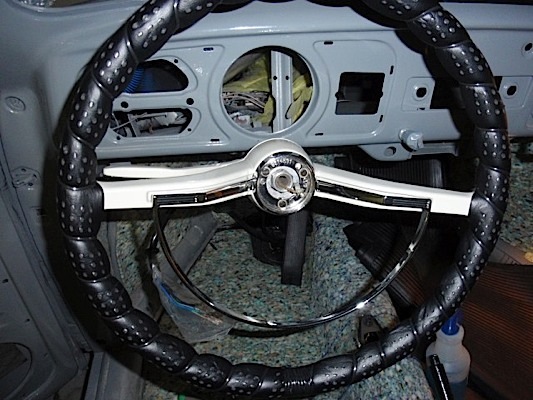 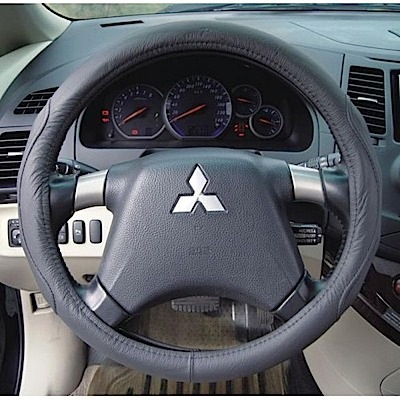 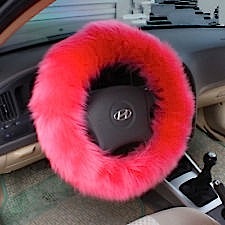 But now, every steering wheel is pretty thick and it’s also very easy to turn, so putting an extra grip on it will make you look like a peasant. Not to mention those that apply fluffy steering wheel covers or ones that imitate wood. 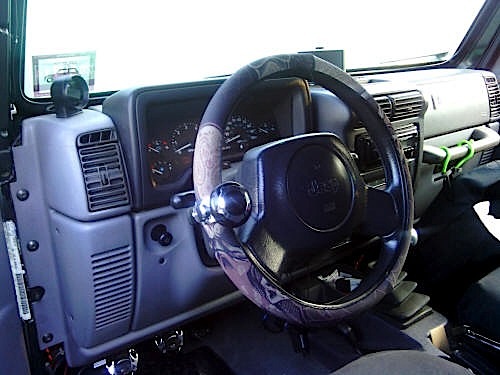 Unless you are driving a tractor, truck, forklift or you’re a disabled person needing one hand to accelerate or brake, you pretty much have no excuse to use a suicide knob. And that’s because a steering wheel in a normal car should be operated with both hands because its safer and more efficient. 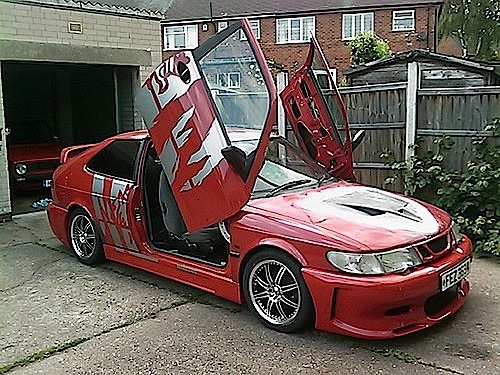 You can adapt your doors to open in the classic ‘suicide’ way, but please don’t make them go upwards. It’s like wearing a sticker saying “I don’t have money for a supercar, but please give me attention”.

Leaving aside the douche-factor, butterfly doors are also hard to live with if your car wasn’t designed to use them. Some doors are way too big to be opened upwards, so even with them fully opened, most of the space needed to get in or out will be blocked. So actually, you paid around $200 to humiliate yourself when going in or exiting the car. 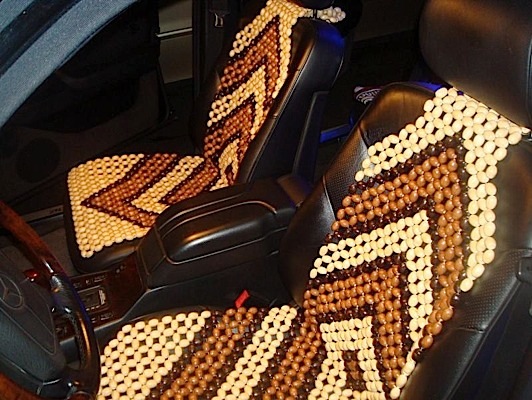 I think these ‘massage’ beaded covers have been invented by rednecks in order to keep their bottoms slightly less wet in the summer, by forming a barrier between them and the textile/vinyl hot seat. Car seats today are comfortable enough and you also have air conditioning, so there is no excuse turning the interior into a pagoda.

It’s totally normal to hang a rosary or other small religious object on to the rearview mirror. Religious people feel protected that way and we don’t want to criticize their beliefs. But in the name of your god, please stop overdoing this. 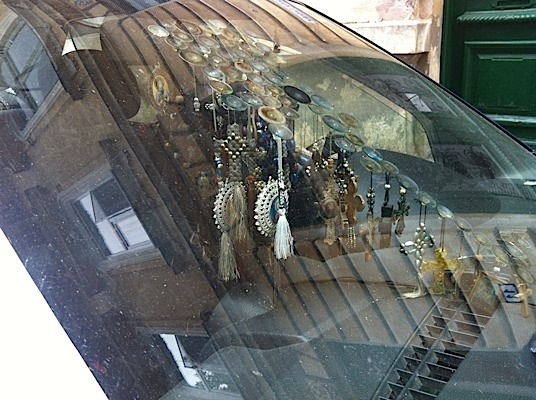 There are drivers out there (mostly in Easter Europe) thinking that the more crosses you hang on your windshield, the more protected you’ll be from an accident. So they end up with a miniature jungle of crosses, rosaries and totems hanging down on the center of the windshield, blocking almost the whole view to the right.

Are you insane? Do you really think your god will magically stop that kid from crossing the street just because you can’t see him, you pathetic, arrogant and selfish human being? Religion needs to be in your heart and mind, not hanging on the windshield!

If you want your car in a different color now, the easiest and cheapest way is to wrap it and there are a lot of skilled wrappers that will make it seem it has been resprayed. But as with other forms of tuning, someone had to overkill it by inventing the chrome or velvet wrap.

Thankfully, chrome wrappings are now illegal in most countries because it can blind people on a sunny day, but velvet ones are still used. How mad you need to be in order to transform your car into a teddy bear on wheels. I’m no aerodynamics expert but I’m sure a porous or fluffy surface will affect the airflow over a vehicle’s body. 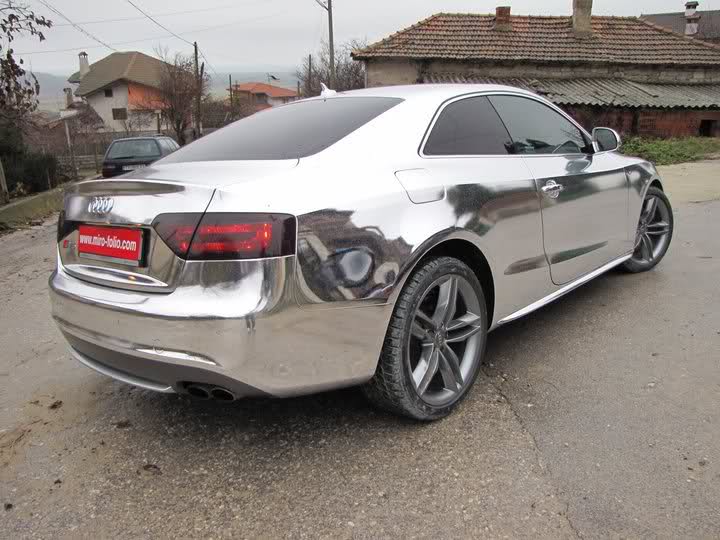 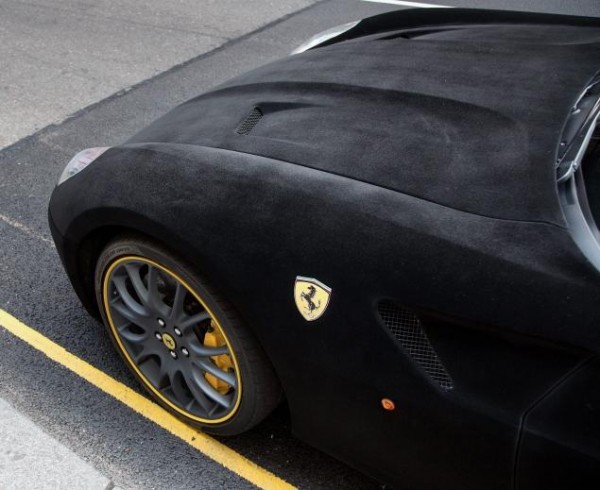 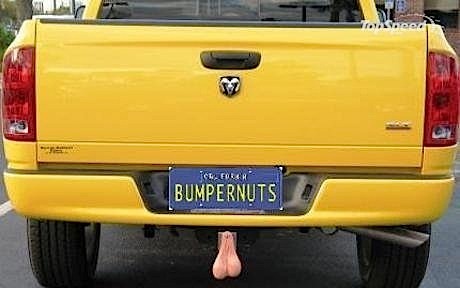 You already drive a humongous ‘manly’ truck, so why bother to hang a pair of testicles on the towing hook? The pair you own is not enough?

So please people, if you don’t plan to look like morons behind the wheel, try avoiding this accessories/mods. There are probably more out there, but we’ll talk about them another time.